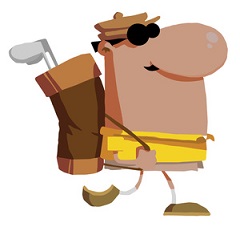 I play in “Walter’s Group,” the name given to a bunch of golfers in my club. Walter is a retired New York City fireman who has taken it upon himself to run a tournament that consists of about 40 senior golfers, give or take a few, depending upon vacations and the Grim Reaper.

Maintaining comity among a gaggle of usually irascible elders (getting up at 7 a.m. or earlier with arthritis and the other infirmities of age will make just about anyone touchy) is no mean feat. Walter must arrange tee times, set up foursomes, collate handicaps, collect fees, and award prizes. Yet he seems impervious to complaint. Nothing bothers him, probably since his former job had him running into burning buildings.

Not to brag, but I regularly win a few bucks, which offsets about 10 percent of my playing costs. Actually, I can’t brag, since the tournament uses a “blind draw” in which my score is lumped in with three other golfers I am not playing with. So, even if I play like Helen Keller (which I often do), I accumulate dough I don’t deserve. (I’m thinking of running for president.)

I mention this because my golf socializing has had an added literary benefit. Since talking politics is verboten in these contentious times, especially with people who are holding golf clubs, course conversations are usually limited to infirmities, brilliant grandchildren (is there any other kind?), restaurants, and pre-retirement occupations.

And not a round goes by without someone asking me about my books, which makes me happy, since, as a writer, I can never retire. I played last week, and the starter (the guy who sends the foursomes out on the course in proper intervals) approached me and said he was an avid reader of my mysteries and thrillers.

Now, you have to understand that I don’t have that many avid readers, so I was excited to meet one! He looked younger and healthier than some of my playing partners, and presumably will be around a while, so I was even more excited.

I’m always interested in people’s reading habits, so I asked the starter, and others, if they have a preference between e-books and print books. My survey was limited, but it appears that a slight majority prefer print, although a significant number read both. And not a few have told me that they really like audiobooks, either on discs or downloaded to their smartphones or tablets.

I like them, too. In fact, I currently have different Robert B. Parker Spenser detective thriller CDs in each of my two cars. I play them whenever I drive around town, hopefully absorbing the cadences and subtleties of a master storyteller. (I also occasionally mix up the plots, but it doesn’t really matter; the dialogue is priceless.)

My Spensers are narrated by Joe Mantegna, who mimics all the characters’ voices (male and female) and puts the listener right into the action. (An aside: Mantegna once played Spenser in a TV movie, rather unconvincingly. He’s Italian-American and looks nothing like the big, tough, ex-prizefighting Irish-American private eye Parker envisioned. Robert Urich was the quintessential TV Spenser. But Mantegna is a brilliant narrator.)

That’s the secret: a good narrator. The audiobook universe is expanding exponentially, thanks to downloading technology.

There are three ways to create an audiobook:

If you decide on the second and third choices, Amazon (among others) provides instructions, as well as links to potential narrators.

Lawrence De Maria was a Pulitzer-nominated New York Times reporter. He will soon put out audiobooks. But with 18 thrillers and mysteries in print and as e-books, it is unlikely he will pay a narrator up front. His golf winnings wouldn’t cover a paragraph. His books are available at ST. AUSTIN’S PRESS (BOOKS BY DE MARIA).