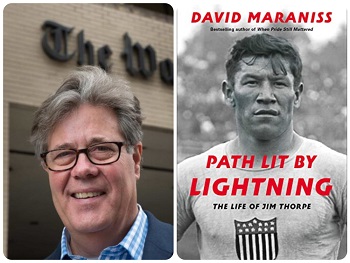 Pulitzer Prize-winning journalist David Maraniss is the author of 13 works of nonfiction, including Once in a Great City: A Detroit Story, Rome 1960: The Summer Olympics that Stirred the World, and When Pride Still Mattered: A Life of Vince Lombardi. His most recent book is Path Lit by Lightning: The Life of Jim Thorpe, which the Los Angeles Times says “goes beyond the myth and into the guts of Thorpe’s life, using extensive research, historical nuance and bittersweet honesty to tell the story of a gifted and complicated man.”

Maraniss discussed his work as an author and researcher with fellow biographer John A. Farrell during a two-part interview.

This podcast comes courtesy of Biographers International Organization. Listen to it here.