Can a book be wickedly funny and sad enough to make you cry? How about both at the same time? Kevin Barry's Dark Lies the Island is a torrent! 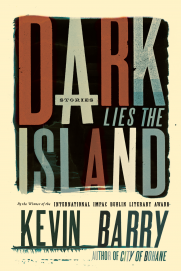 Read our review of Dark Lies The Island here. Kevin Barry is reading at the Warehouse Theatre today (Wednesday, November 20, 2013) at 7:00pm.

From Across the Rooftops to Wifey Redux, A Cruelty and of course, Dark Lies the Island, Kevin Barry is a prize winning story teller. This is his second book and a romp it is. The collection includes love gone wrong, woeful boys in bad situations, and the Irish in other parts of the world.

Q&A for Dark Lies the Island by Kevin Barry

The Irish are crazy. You’ve heard this before. What do you say? How do your stories contribute to or dispel the lore?

Okay … So first, I think, we’ve got to consider the impact of 300-plus days of rain a year on the human soul. Ireland is a small, tormented, very wet rock at the edge of the Atlantic, and the climactic conditions mean that we’re indoors, a great deal, and it means we’ve got to make stuff up, and tell each other tall tales, or else we’ll go nuts. You might call it crazy - I call it survival. And by the way, I refuse to accept any responsibility for the stories. I’m just a magnet for this stuff.

Your stories sent me off, and brought me back. Made me shake my head and laugh out loud. Which is the most gratifying to you? Do you want your readers crying or laughing? Or both?

Ideally both, and if possible simultaneously. Actually, I love the Nabokov description of literature as ‘laughter in the dark’. I like to think of the reader kind of chuckling wryly along all the way through a story and then, at the end, shuddering and thinking ‘what the hell was I laughing at there?’

Can you name the beer that caused your characters “an eyebrow raised in mild appreciation?” What would be the reaction to a beer one loves?

Many a fine ale might cause an eyebrow to raise in appreciation. Here is a good place, by the way, to raise a complaint about American beer, and I mean the stuff that gets called “craft ale”? It’s too strong. As in, MUCH TOO STRONG. It’s often like seven percent or eight percent to volume? This is ludicrous. This isn’t beer. This is closer to port wine. Get a hold of yourselves, people. Good, honest, reliable beer should be between four per cent and five per cent to volume. I don’t want to have to tell you this again.

Ernestine and Kit are like reformed nuns, or more truthfully, the opposite of nuns, nightmares. They are inexplicable. Where in the world did they come from? How do the two of them recognize a liar’s chin? Please describe one so that I’ll know it from now on.

I was driving around a lake in County Sligo with my wife and these two perfectly blameless little white-haired old ladies passed by in their car and waved at us, very sweetly, and we waved back, and then I immediately said to myself, “They’re out to rob a child.” I don’t know what put this thought there. I don’t know what’s wrong with me. A liar’s chin? Hard to explain. But what is referred to as “a weak chin” has always, in Ireland, been considered evidence of poor character.

“Daylight poured a light sleep over him,” in the Mainland Campaign.  What a title. The two words are so mundane and yet, in this context, clearly frightening. And I thought a campaign was an organized way to achieve a common goal?

Actually it was a quite a common phrase used in the 1980s to describe the Irish Republican Army’s bombing campaign in Britain. I thought it had resonance as a title. Titles are tricky, of course, and can make or break a story. I find if they don’t come quickly, it’s often a symptom of something being wrong with the story.

Doctor Sot names his car after his mother and goes on to say that both the car and his mother had “a martyr’s perseverance and a lack of natural advantages.” Do you think he likes one as well as the other too? Have you named any characters after people you actually know? Modeled a character on anyone?

Quite rarely, actually. I suppose sometimes you’ll take elements or facets of someone you know and use these but it would be rare for me to body-snatch an actual whole person and put them on the page. Sometimes my characters come out of archetypes – a doctor who drinks is such a type, and so you take that type and try to etch in the fine detail.

“Mad thyroidal eyes.” Jesus, I can picture these and I even know a little about the character from your three words. There’s a kind of incredulity in the stare or maybe she just knows better. It doesn’t even have anything to do with the gland, does it? Can you do it again? Put together three words and give us a whole world?

Hey, ask me some easy ones! As for thyroidal eyes, I’m picturing a Marty Feldman type … readers of tender years may have to resort to Google images at this point. With description, I like to telegraph it if I can – if you can do it in three words, why use fourteen?

In “The Girls and the Dogs,” do you think the young man and women give their guest enough of a taste of prison to reform his character? Would you say your characters ever reform, conform or just play out?

I’m always suspicious of neat arcs in stories. There are no neat arcs in life. I think in this particular story, we do get a halfway hopeful ending from a pretty bleak situation. My characters are very often desperate but very often resilient too, I think.

You’ve given us an entire world in these fictional stories. Have you given away some secrets? Is anyone upset with you because of them?

I suppose you’re always worried that friends or family will think you’ve let some cats out of the bag. But mostly I think they don’t mind so much when stuff shows up on the page. In fact, my experience is they start trying to feed you juicy material in the expectation that it’ll get into the stories.

“Going to be toes up on a slab with the hair parted wrong…” You’d think that hearing this once would scare the crumpets out of anyone. Does it? It’s also hilarious at the same time like so many of your stories. Are you ever torn between the hilarity and the sadness?

People tend to laugh and giggle a lot outside the church after funerals. At least they do in Ireland. It’s a natural, nervous human response to a dire situation. Very often in life we get through in this way, I think. (I love “scare the crumpets” by the way.)

You’ve given this reader lots of new words and I suspect you’re better than a dictionary, more lyrical, apt and true. I could look them up and in fact, of course, can divine the meaning from the story, still ... please provide definitions for the words huke, half-steamer, whuzzled and wet brain thinkin:

“Islands were inky blobs of mood against grey water.” Is this why you titled the collection Dark Lies the Island, which is wonderful, by the way?

Of the 13 stories in the book, it was this title that seemed to lend itself most naturally to the collection as a whole. That particular story isn’t typical – being one of the very few I’ve written with no laughs at all – but it is a favorite of mine.

In Berlin Arkonplastic, My Lesbian Summer, I love the way his friend tells her story to him in “night time crumbs.”  Have you written a story this way?

I would say it’s more usual for stories to come in a single rush, or a blast, and with the good ones, the feeling of this can be torrential. But sometimes stories come together bit by bit, in tiny increments and by a process of slow accumulation, and oddly this story you mention was one of those.

Ethics and morality are explored in three very different novels that span place and time, from 16th-century London to a southern plantation on the verge of the Civil War to contemporary Saudi Arabia.