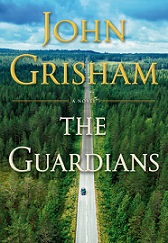 For those who wonder how John Grisham keeps coming up with his compelling characters and spellbinding plots, the answer can be found in the author’s note at the end of his books. There, he discloses that he learns of real people and the things that have actually happened to them — often stranger than fiction — and then makes them the starting point for his novels.

Once he’s got that, he creates a tight outline for the flow of his story, cranks up the poetic license, and proceeds to turn out number-one bestsellers year after year.

Such is the case with his new novel, The Guardians. Protagonist Cullen Post is a lawyer and Episcopal cleric employed by Guardian Ministries, a nonprofit dedicated to exonerating wrongfully convicted innocent people languishing in prison.

Post’s mission matches up with that of flesh-and-blood James McCloskey (to whom Grisham dedicates the book), who left his divinity studies at Princeton 36 years ago to form Centurion Ministries and, ever since then, has gone all over the country attempting to free innocent people from incarceration.

In the main plotline of the book, Post takes on the challenge of representing Quincy Miller, a man serving a life sentence after being found guilty of a murder in which he played no part. Miller’s conviction is based largely on specks found on a flashlight’s lens in the trunk of his car that, according to a junk scientist “expert” witness, tied him to the crime.

This nightmarish predicament aligns with an unfortunate Texan named Joe Bryan, who’s spent the last 30 years in prison after being found guilty of murdering his wife based on bogus specks on a flashlight. Bryan’s tragic story was detailed in the article “Blood Will Tell,” by journalist Pamela Colloff and co-published by the New York Times Magazine and ProPublica in 2018, which Grisham happened across before embarking on his annual thriller that typically gets released in the fall of each year.

With his central character and plot grounded in the real world inhabited by real people, Grisham proceeds to construct 48 chapters that twist and turn with whirlwind pacing into a tightly interwoven story that should induce high-speed reading for all who pick up the book.

One of the author’s most endearing trademarks that adds extra spark to his electric books is his biting humor. The governor who goes on television to announce he’s decided to deny clemency and, thus, wants an execution to proceed, has “every tinted hair gelled with precision. A walking campaign ad.” After delivering his message “with as much drama as he can muster, he bows and slowly backs away from the camera, his grand performance complete. Elvis has left the building.”

Where The Guardians really takes off is when Grisham turns his imagination loose and lets it fly. Without wanting to spoil the plot, suffice it to say that the book contains a scene in a Central American bayou filled with crocodiles that would present a serious challenge for Indiana Jones on his best day, and another scene in a haunted farmhouse that’s more frightening than anywhere Norman Bates ever lived.

Aside from his entertaining plots, characters, humor, and scene depictions, what makes Grisham a truly important writer (beyond being a bestselling author) is that his novels have at their core a purpose: to awaken millions of readers to the reality of the glaring deficiencies in America’s criminal justice system.

He often injects his personal thoughts into his novels to accentuate the sad state of today’s system. For example, “Jailhouse snitches testify every day in this country. Other civilized countries prohibit them, but not here.” Another one: “Over a twenty-five-year career, the [junk science expert witness] testified in hundreds of criminal trials, always for the prosecution, and always implicating the defendant. And always for a nice fee.”

Academic psychologists have concluded that (i) the only way to change a person’s mind is to change his heart; and (ii) the best way to change a heart is not with statistics or dry facts, but with a well-told story.

Given that, per the New York Times, “John Grisham is about as good a storyteller as we’ve got in the United States these days,” for decades he’s been in the business of embracing the task of educating the masses through his heart-changing, mind-changing stories about what needs to happen if our system has any potential of achieving justice for all.

Though Grisham knows his books will never be classified as “serious fiction” and he’ll never be confused with Dostoevsky, his legacy is secure as a prolific, entertaining writer whose novels not only reach the top of the lists, but also contain much-needed insight capable of advancing awareness of what needs to change if we aspire to become a more just and humane society.

Talmage Boston is a lawyer in Dallas, the author of four books, and a frequent reviewer for the Washington Independent Review of Books.