An Interview with Tom Young

The former combat flight engineer talks WWII, dual protagonists, and a B-17 that once dripped blood. 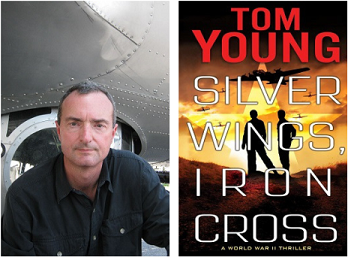 Tom Young writes about what he knows: the military. He logged almost 5,000 hours as a flight engineer on the Air Force’s C-5 Galaxy and C-130 Hercules, and flew missions to the Horn of Africa, the Far East, and nearly 40 countries — including combat missions to Bosnia and Kosovo — during his 20 years in the Air National Guard.

Young has also been awarded three Air Medals, the Meritorious Service Medal, and other honors. The guy knows the military. Today, he’s a commercial airline pilot who writes well-received thrillers in his off time. His new novel is Silver Wings, Iron Cross.

Why did you choose to set Silver Wings, Iron Cross during World War II?

My grandfather served in the legendary Eighth Air Force during World War II, and I grew up listening to his stories. I’m told he never talked about the war until I came along. Maybe it took that long for him to be ready to tell his stories. I was certainly ready to hear them. I recall one especially vivid memory that he described: One day, he was marshalling a B-17 Flying Fortress that had just landed after a mission. Some of its crew were dead or wounded. As the aircraft taxied into its hardstand, he noticed fluid leaking. Then he realized the aircraft itself was dripping blood.

The air war over Europe involved some of the most brutal combat of the war. And the overall history of World War II has always fascinated me. So much happened in such a short period of time that historians are still learning about it. In terms of technology, the war ranged from one of the last horse cavalry charges to the first ballistic missiles and atomic bombs. In terms of ideologies, it pitted the great democracies against authoritarianism. I've always wanted to write a WWII novel.

The novel has two primary characters. How did you decide their stories?

One of my main characters, Karl, is the pilot of a B-17 Flying Fortress. He comes from a German-American family in Pennsylvania, and he grew up speaking German in the home. However, he is very much a loyal American devoted to his job. On what would be his last mission before completing his tour and rotating home, he’s assigned to bomb targets in Bremen.

That causes him some inner turmoil; he has extended family in Bremen, and he would rather not bomb the city. But he can’t find a legitimate excuse not to fly, so he presses on with his duty. On his last mission, he gets shot down, and he parachutes from his stricken aircraft. Because he speaks German, he can blend in somewhat if he ditches his uniform.

My other main character, Wilhelm, is the executive officer of a German U-boat. By now, it’s late in the war, and Wilhelm has become disillusioned. He knows the Nazi cause is lost. As Wilhelm’s U-boat limps back into port at Bremen, the crew receives what amounts to a suicide order. After they re-arm and refit in Bremen, they are to go back out on patrol, and when their torpedoes are expended, they are to attack Allied shipping by ramming.

Wilhelm decides he will not sacrifice his crew for a lost cause. He also decides that the best way to stop his U-boat from going out on a suicide mission is for him to desert. The crew cannot patrol without an executive officer, and U-boat-qualified officers are in short supply. When Karl’s squadron begins to rain bombs on the submarine pens at Bremen, Wilhelm uses the chaos as cover to slip away from his base.

Karl and Wilhelm meet up in the aftermath of the air raid. After they get past the first five minutes without shooting each other, they realize they can work together to survive as the Third Reich collapses around them.

What were you looking for in these characters?

Both are thoughtful, competent young officers, but they have very different personalities. Karl is more easygoing, and he demonstrates an irrepressible optimism that begins to grate on Wilhelm. Wilhelm, on the other hand, is more tightly wound. He’s a German officer, after all. Plus, he’s facing the end of his career and the end of his country as he knows it. As they share their experiences during the journey, they [transition] from enemies, to uneasy allies, to friends.

Military historians will tell you the most dangerous times for noncombatants and POWs are at the very beginning and the very end of a war. These two characters have to navigate a deadly landscape at the end of a war and deal with situations for which they're not really trained. I wanted to explore the kinds of choices they'd make and the kinds of bonds they might form.

You are an experienced Air Force veteran, and you spent many hours in the air. How did this affect your writing?

That experience helps me write about aviation and air combat more authentically. Fortunately, I never experienced anything as awful as what many World War II bomber crews faced. But I know what it's like to see lights coming up at you and to realize that's someone shooting at you. And although the technology changes, other things do not: that anticipation as you start engines, the sweat in your palms as you run a combat-entry checklist, and the relief when you complete a mission safely.

Are you working on a new book?

Indeed, I am. It's another WWII story, tentatively titled The Magnificent Rescue. It's based on the real-world rescue of more than 500 downed Allied fliers in German-occupied Yugoslavia. The rescue crews flew C-47s into a short dirt airstrip, sometimes at night. With WWII technology, they pulled off a feat that would be challenging even now, with C-130s and night-vision goggles.

Larry Matthews is the author of Age in Good Time: Life and Lessons from Seven Men in Their Seventies.

An Interview with Tavis Smiley

Nigel Hamilton, biographer of presidents and others, talks with Charles J. Shields about the revolutions in the Arab world through the perspective of American history.