An Interview with Tom Harbin

How a physician/author brought a blinding scandal into public view. 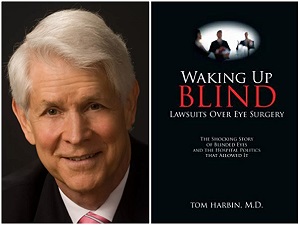 Tom Harbin is an ophthalmologist in Atlanta who woke up one morning and decided that he wanted to write a book. He had a striking story to tell and a reason to tell it. But it was a complicated tale, and it felt like it might require specialized knowledge to understand. Ten years later, Harbin’s book, Waking Up Blind: Lawsuits Over Eye Surgery, finally became a reality.

Is this the book you wanted to write?

What is the story?

It’s the story of a superstar physician, the ophthalmology department chair at Emory University, and the system that protected him despite the fact that the surgeries he performed were not always necessary; the documentation was deceptive; and, on occasion, notes were altered later to fit something other than necessary care. His operations led to a number of lawsuits because of blinded eyes.

Where did you go for the facts?

I did an independent medical evaluation in one of the cases where a patient had surgery done on the wrong eye, the patient’s good eye. The chairman told the patient that he “decided” to operate on the good eye when, in fact, it was plain and simple wrong-site surgery. He later operated on the other eye and, still later, both eyes went blind from neglected glaucoma. So, I knew the lawyers involved in the case and had followed the news stories about ophthalmology at Emory, and I was friends with David Campbell, who was one of the two physicians sounding the alarm about what was going on at Emory. Lots of people wanted to talk since just about everyone knew what was going on, so technicians and others in the hospital shared stories, as well.

Why wasn’t the story told before?

Emory kept a lid on it. The two good guys, David Campbell, M.D., and Allen Gammon, M.D., were the eighth and ninth lawsuits, and I am pretty sure that the settlement included nondisclosure of amounts and a gag order on talking about the issue. My literary attorney made sure that the story was told through quoting documents as much as possible, so it wasn’t me saying this; it was quoting the record.

What went wrong at Emory?

The problem was the culture. Problems started from the top. Money generated power and the ability to generate money. And this came from the top. The chair of Emory's eye department, Dwight Cavanagh, was the physician at the center of the story who did the wrong eye surgery. He also built the eye hospital building, he brought in good faculty [and] research grants and enhanced the prestige of the institution. Nothing is all good or all bad, and this was the good that Dr. Cavanagh brought and the reason the bad was tolerated.

One of the heroes was the ethics committee from the American Academy of Ophthalmology, led by George Spaeth, M.D. They clearly stated that ethics were breached, and the academy took action against Dwight Cavanaugh for his behavior. David Campbell and Allen Gammon are also heroes who should be recognized. Still, the hard-to-digest part of the story is the reprimand by Emory University School of Medicine of the physician who stood up and pointed out the problems early on. Emory chastised him for “moral superiority” in pointing out unprofessional behavior. That letter was never rescinded. The Waring Committee did as much as any committee could do to document the bad things that their chairman did. They laid it out. Then they took it to the vice president for Health Affairs, who just ignored the information presented. If the leaders were ethical and honest, they would have recognized the problem and been much more concerned about the behavior.

Could this happen today?

First of all, the culture at Emory has changed, and it is unlikely that this would happen there again. The National Practitioner Data Bank is now in place that would stop someone from doing the same things across state lines. We still must find a way for people to feel safe reporting bad behavior. There needs to be a safe space for whistleblowers because there are bad eggs in any large institution, and a system to protect people and allow a whistleblower to be safe is needed.

Tyler Cymet, DO, attended Emory University while these events were occurring. He is the chief of Clinical Education at the American Association of Colleges of Osteopathic Medicine and is a change management consultant for the Michigan State University Institute for Global Health. He is also the author of Health Info to Go: General Medicine and Addictionary: Guide to Drug User Terminology.