An Interview with Tina Alexis Allen

The actress/playwright talks sexuality, family secrets, and the redemptive power of forgiveness. 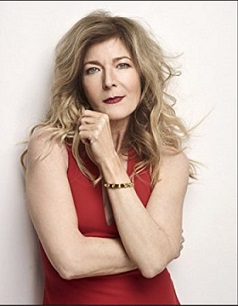 Sometimes, that old adage about truth being stranger than fiction isn't all together accurate. In the case of Tina Alexis Allen's new memoir, the truth is also more perverse, unsettling, and cinematic in scope, with characters straight out of central casting. Stranger, yes, but Hiding Out: A Memoir of Drugs, Deception, and Double Lives takes every dysfunctional family you've ever met — fictional or real — and redefines the brand into something that questions truth entirely.

The youngest of 13 children, Allen grew up in Chevy Chase, Maryland, in a house ruled by her father, Sir John, a disciplinarian to the extreme. A Brit who demanded a linen napkin when he dined and a bottomless glass of wine, Sir John had been knighted by Pope Pius XII and supported his brood by running a successful travel agency that specialized in taking tours to the Holy Land. But he was also up to something else, something more sinister and secretive than his daughter could ever have imagined.

The book chronicles how, over boozy lunches at the University Club, "tea dances" at gay bars, and countless first-class excursions overseas, father and daughter bond over sexual secrets that, ultimately, unravel a family built primarily on deception. Perhaps it's Allen's background as an actress and playwright that gives Hiding Out, at turns jaw-dropping and spellbinding, its dramatic tension and spot-on dialogue. Her memoir is as compulsive to read as it is heartbreaking. And that's the truth.

I love the disclaimer you have at the front of the book, that reads, in part, "This is a work of nonfiction. The events and experiences I describe are all true and have been faithfully rendered as I have remembered them, to the best of my ability." People new to writing or reading memoir often ask how the author can remember so much detail — from what you had for dinner 30 years ago to reconstructing dialogue — when you were a kid. Unless you were running around with a steno pad, how did you recreate such huge swaths from your past?

The events of my childhood — because they were so explosive — have always been vivid. Also, the keen details of what things smelled like, what I ate, and, most definitely, the dialogue I remembered, are from my years of being a method actor and practicing creative recall. That isn’t to say every experience must be The Truth but, of course, it’s my truth and how I remember it. Most definitely my work as a screenwriter and playwright has helped my ear for dialogue, but also having played many of these characters on stage in two autobiographical solo shows has contributed as well.

What's it like to write about people who are still very much alive? Did you feel hampered by it?

No, I didn’t. I’ve always felt that my story is bigger than the players in it. The themes I explore are what’s most important to me. Knowing my purpose for the book — for it to be a potential mirror for others to examine their own shame, secrets, family struggles, and obstacles to freedom — gave me permission to trust the process of writing such a personal and detailed account of my life.

The affair you had with your middle-school teacher (or, rather, that she had with you) when you were barely a teen was the most unsettling aspect of the book for me. Especially now, in light of #MeToo. You write about that time rather sweetly, but I'm wondering if you now look back on it, especially as you were writing, and see this teacher as more predatory than adoring.

It was beyond predatory: It was child abuse. That said, since I wrote this memoir from my young-adult voice (18-24), I was still very much protecting that “relationship” as something special. It was probably an act of self-preservation, needing to believe she really loved me. When I turned 26 — the age my teacher was when the three-year “affair” started — I woke up to the truth.

We see the result of forgiveness on the pages here. But we don't get too much of the hard work you did to achieve it. You mention therapy and sobriety, but I'm wondering if writing this book was the final step in the process.

I have done decades of healing work, so by the time I started writing the book, I felt mostly on the other side of any pain. Writing it was time to stand shamelessly in my truth so that others might stand shamelessly in theirs. I believe transparency is the path to freedom.

I'm wondering which character was harder to write about — your mother or your father. They are both so fascinating and complex for very different reasons. I found your mother more enigmatic and with what seemed like a completely one-of-a-kind moral compass. Without spoiling the book too much, do you think she was the ultimate forgiver?

Writing about my mother was hardest for me. Because of the fact that my family put her on a pedestal, it’s always been a challenge for me to confront things that didn’t hold my mother in perfect light. She was frequently called a saint by family and outsiders alike — even by my father. So, to reveal the humanity of a “saint” feels like you are going against the grain, certainly against the tribal code. That said, she had saintly attributes, such as her ability to see my father with love despite how [cruelly] he would treat her at times. So yes, she was absolutely an ultimate forgiver.

One of the big themes here is: How well do we really know our parents? Do you feel like you know yours better after writing this book or are there still secrets to discover?

Well, certainly Dad’s Vatican secrets are still a bit of a mystery, although my memoir does put pieces together and theorizes what he might have been doing. I think writing about one’s parents absolutely helps you see them as three-dimensional. Exploring my past and specifically in so many creative forms — screenplay, solo shows, memoir — has given me the greatest gift ever, which is to see my parents as human beings, not simply as my parents.

I think structure can be a big challenge for memoirists, since we're only writing about a part of our lives, not our whole lives. Did you intend to bookend your memoir with two wildly different Christmas Eves?

I didn’t enter into the writing process knowing I was going to bookend it with Christmas Eves, but as I was editing, it evolved into that. I will say, for me, Christmas Eve was magical — the best night of the year. All the pain and betrayals forgotten in the joy of a formal evening of twinkling lights, singing, and whiskey sours.

It seems like the epilogue is a launching pad for another book. Do you have a second book in you, or are you ready to bury this part of your life?

I have many books in me. There are certainly parts of my life that don’t get explored in Hiding Out that have a wealth of life lessons and drama. But, as far as the epilogue and my father’s secret Vatican work, there is a lot of potential there for another book, and also a great challenge: how to get information about my father from the Vatican.

Cathy Alter is author (with Dave Singleton) of CRUSH: Writers Reflect on Love, Longing, and the Lasting Power of Their First Celebrity Crush, as well as Virgin Territory and Up for Renewal. She teaches creative nonfiction at Johns Hopkins in Washington, DC, and is a member of the Independent’s board of directors.