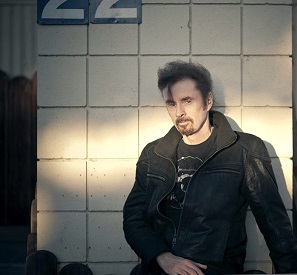 If there's a fifth dimension, T.C. Boyle got there first. His voluminous body of work dances between satirical, laugh-out-loud funny, somber, and thought-provoking...and sometimes just plain weird (in a good way!).

As a novelist, he's looked at Alfred Kinsey, Joseph Kellogg, and Frank Lloyd Wright, along with fictional characters of all stripes. As a short-story practitioner, he's even more eclectic: "Ike and Nina" tells of the doomed (and real only in Boyle Land) secret Cold War romance between President Eisenhower and the wife of Soviet leader Nikita Khrushchev.

"Caviar" lays bare the surprising story of a couple struggling to have a child. "My Pain Is Worse Than Your Pain," a more recent piece, signals what Boyle says is something of a shift toward more somber writing and less out and out "off the wall" work as "I move on down the long dark road that inescapably ends in an even darker place."

The Harder They Come, his 14th novel, looks at American violence from a number of perspectives: a schizophrenic survivalist killer named Adam, his former Marine dad, Sten, who commits socially acceptable violence during and after his military service, and Adam's sort-of girlfriend Sara, a militant anti-government figure whose reactions to authority are more emotionally than physically violent.

We met when he gave an outstanding reading and discussion at the Folger Shakespeare Library in March and spoke on the phone a few days later.

At the Folger, you said you always listen to music when you write. The Harder They Come echoes the Jimmy Cliff song, and the locale of some of the book is in reggae country. Did you listen to Cliff, Marley, Tosh, and others while working on this one?

No, I didn't. It would seem logical to listen to, say, period music when I wrote The Women [a 2009 novelization of Wright's life] or reggae for this one. But, really, I just listen to whatever I feel like on a given day. It's mainly classical or jazz. But I do have to have music on when I write. As long as there are no lyrics in English, I'm fine with it.

You had dreams of being a musician, right?

What was your band called?

The Ventilators. We played covers. Just for fun. You can hear me screaming out, "I Put a Spell on You," on my website. It's right on the home page. Right at the top, there's a little record symbol. But stand back a little from the speakers. Don't want you to lose any of your hearing.

Yeah. I describe myself as an environmentalist, but that's not because I am marching in the street, either signing petitions or thwarting organizations, but because I like to be in a state of nature, alone. At my happiest, that is where I am and that's what I do. Just to be in awe of the natural world. When I'm done with my work for the day, I go out into the woods every day. Whether it's winter or summer, it doesn't even matter.

Yes, nature is enormously important to me and so, too, physical location. [In The Harder They Come], we have a setting in the Redwood Forest in Northern California. In part, I chose the story of this particular shooter as opposed to many of the others I was considering because of its location that I know so well.

There's also a small part in my second novel, Budding Prospects, which was also set in that vicinity. I'm retreading ground where I've been before.

Okay. Let me ask you about epigrams. You use those often, all of them very apt...

I must correct you [laughs].

I must correct you. We're speaking of epigraph.

Okay. I will edit that out [laughs].

An epigram is a short, pithy, witty saying. An epigraph, graph, you can remember it because graph is writing. Epigraph is what comes before writing.

The epigraph is very important to me, as is the title. With all my books, but one, I had a title to begin with. One exception was Budding Prospects. I did have the two epigraphs, though. The title was fluid and changed.

Ninety-nine percent of my work, I have a title to begin with and it is almost always the title I use. Somehow, having a title and epigraph gives me a kind of fanatic focus. I really don't have a plan for any story or novel. Except as it evolves internally, I think structure is organic, and it's difficult to impose structure from outside.

Now, that said, often I will have an idea of an emerging structure on which to hang all of the events that are unforeseen and that will evolve as the book goes on. For instance, in the current book, The Harder They Come, I knew that we would have a set base of Costa Rica and that we would move north. I didn't know exactly how that would work out. Of course, I knew that Adam's story would evolve from his initial appearance to his illusions and violence.

Some books are united by seasons. I already mentioned Budding Prospects. Some by dates and times. It's just a way of giving structure to the book without…It's almost like theoretical outline. The epigraph is very important by way of giving a kinetic idea of the book, for me. Just to have something to put into.

In the preface to T.C. Boyle Stories II, you talk about becoming a little more somber in your work.

In the beginning, I just wrote a lot of off-the-wall, surreal, crazy stuff because that's who I really am. Or who I was, anyway. Now I think I have a wider palette and I don't reject anything. I would write a story in any mode about any subject as long as it seems reasonable. Once it starts, it starts. Again, that's a kind of overview of my work, and I think, in general terms, it's true that there is a smaller percentage of off-the-wall, crazy stories in what I do now. Still, I embrace them. I'm happy for them and when they come, I'm delighted.

I don't calculate anything. I don't choose a subject because I think people will be interested. However that operates. Just working from myself and whatever happens, then give it to you. I could write a thesis about my work, of course. I know exactly what it is and what it means, but that's not fair. That's irrelevant. If I wanted to do that, then I would. I'd write an essay on a topic like gun violence in America. I'm not interested in that. I'm interested in making art because it fascinates me.

I think this is one of the main motivating factors for why I have been productive and why I enjoy working. I'm just an artist. Every day, I wake up and I am working on something.

What am I saying there? I'm saying that I'm very lucky to be able to be an artist and that I continue. So far, so good.