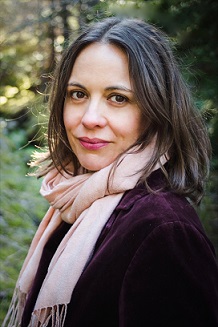 In her debut novel, All Is Beauty Now, Sarah Faber combines the raw splendor of Rio de Janeiro with family tragedy. In 1960s Brazil, the Maurers seem to enjoy a picture-perfect life. But scratch beneath the surface and things are far from idyllic. Hugo, the patriarch and a Canadian expat, battles with a mental illness that slowly withers the dashing man he used to be.

His wife, Dora, tries her best to deal with the strain of a volatile husband and the responsibility of caring for three daughters. Often overwhelmed, she allows herself to be swept up into an ill-advised affair that will have dire consequences for her already-troubled family.

But the true test for the Maurers presents itself when their eldest daughter, Luiza, apparently drowns at sea, although her body is never recovered. As the novel progresses, Dora, Hugo, and their two other daughters will find their lives altered in ways that will either bond them forever or break them up for good.

What inspired you to write this story?

I was largely inspired by my family’s stories about their lives in Brazil before moving to Canada in the early 1950s. I think, in general, I’m drawn to stories of people living in extremis, or in unusual circumstances. My grandfather was diagnosed as bipolar when that condition was little understood, and I was drawn to the contrast of their living in such a beautiful place while dealing with a very unpredictable condition. Their lives could be quite exciting at times, but there were also periods of profound sadness and melancholy, and all the while, they were living in a country associated with celebration, but which also has a strong undercurrent of loss and melancholy.

In the novel, the descriptions of Rio are extraordinarily detailed. Have you lived there?

No! And I do worry that perhaps it was presumptuous to write a book set in a place I haven’t been to, and that Brazilians might read it and be horrified. But I did do a tremendous amount of research. I consulted maps, films, documentaries, and photographs, as well as books. I also grilled my Brazilian relatives and asked my aunt to vet it. But in the end, I don’t necessarily think it needs to be perfectly accurate. Rather, my hope is that it’s convincing.

How did the idea for this novel come about?

I used the basic structure of my family and the broad biographical strokes of their lives in Brazil. I took the idea of the missing daughter from the fact that my mother’s eldest sister died in her early 40s, and while I felt like it would be too painful and personal to write about the particular details of her death, I did want to write about loss and grief, and all the fault lines they can create — or deepen — within a family.

Luiza disappears at a moment when the family is in the process of uprooting themselves from Rio to move to Canada. Is her vanishing a catalyst for, or more of a consequence of, the family’s deterioration that follows?

I think it’s both. The Maurer family has this narrative or mythology they’ve constructed about themselves that their community shares to some degree: that they have — until recently — had a golden, almost Edenic kind of life. They want to believe that it’s the father’s illness and Luiza’s disappearance that have caused their fall. But as the novel unfolds, we come to find that their lives have been unraveling for years.

Why are the lives of the women in the family undone so violently as a direct result of the actions (or non-actions) of the men?

At that time (and, of course, still in many places), the course of women’s lives were determined to a large degree by men, particularly their husbands and fathers. Even though a woman could have in the early 60s become educated and independent, it wasn’t always encouraged. I think women could sense that change was coming, and were restless for it, but weren’t quite at that point where they could fully define themselves apart from men, from male desire and expectation. So, you sense in both Dora and Luiza the possibility for that change, but also the frustration of not quite yet being able to attain it. Luiza, however, being younger, seems like she might actually make that shift, but the “how” still eludes during the span of the book.

Which character presented the biggest challenge?

I think Dora was the hardest to write overall because she’s the most emotionally restrained (and I’m not!). Also, her choices as a mother are sometimes hard to understand, and even though I was writing her, I sometimes became frustrated with her. But it would be too dull if everyone in the novel had similar temperaments. I’m drawn to contrast, and there’s an interesting tension that arises given that she can be quite remote, while her husband is very demonstrative and mercurial.

Would you say the novel is a study about the difficulty of keeping a family together when dealing with mental illness?

That’s certainly part of it, though I like to think it’s about many things. I think I was really drawn to other themes, as well, such as nostalgia and how it can corrode as well as gild our memories. Also, how families create their own mythologies, and how we all construct various narratives about the people we love and ourselves as a way of dealing with uncertainty, and we can sometimes oppress those we love in doing so.

I’m working on another novel based on a real murder that took place in the 1920s. I’ve done a lot of research, and I’m really excited about getting into the actual writing.