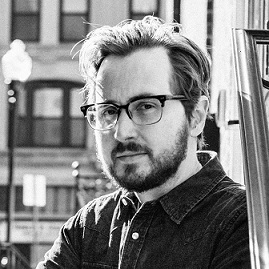 Nik Korpon inspired me. Years ago, I was writing crime fiction but unsure of my voice. I was still caught in the literary versus genre mindset, and my writing displayed my uncertainty.

Then I stumbled upon Bar Scars, his early collection of short fiction and, for the first time, realized there was no difference between genres when it comes to good writing. Korpon’s prose had the patience and care of writing’s best practitioners. I read more of his work, and I was left similarly impressed by the risk and craft in his crime novel Stay God, Sweet Angel.

After publishing two novels in science fiction (The Rebellion’s Last Traitor and Queen of the Struggle) dubbed, collectively, "The Memory Thief," Korpon has returns to gritty noir with Old Ghosts, a smooth novella out later this month.

I wanted to introduce Independent readers to the writer whom Spinetingler Magazine named one of the leaders of today's neo-noir movement.

You cut your teeth writing noir, then switched to science fiction. Old Ghosts seems like a return to form. Do you plan on staying in crime fiction, or are you going to keep a foot in both lanes going forward?

I like being able to go between the two, being able to follow an idea wherever it takes me. It's kind of like working different muscles. A lot of my ideas don't fit perfectly into one genre or the other, so it's nice to hop between the two. In the past, I've blended the two a lot because crime and sci-fi seem to mesh well together, but it has made it much more difficult to sell a book like that. While I don't really consider myself a sci-fi or crime writer, making them obviously one way or another does make my agent's life a lot easier.

Was it jarring, after two sci-fi novels, to return to crime fiction?

No. In fact, it was kind of refreshing, like finding an old record you haven't heard in years. The sci-fi stuff I write isn't too far out there, so it's not too far of a jump. But after writing two novels in the Memory Thief books and another “Die Hard in Space,” it was nice to return to normalcy in Baltimore — or, as normal as Baltimore can get.

Old Ghosts was an interesting case, because I originally wrote it nearly 10 years ago and was at a very different stage in my writing. I was younger and trying to figure out what I wanted to do, and I ended up writing much more floral, elaborate descriptions, most of which make me cringe now.

But I always liked the bones of the story. It's always felt very propulsive and inevitable, probably because I was trying to ape James M. Cain but with “Star Wars” shit throughout. When the chance came to rewrite it, I wanted to pull back some of that overwriting but also make the story a little more relevant, more reflective of today's Baltimore, which has changed a ton since I wrote it first.

If memory serves, I think it took me about two weeks to write the first draft of Old Ghosts, then I edited it for a little while, but I can barely remember last week, much less 10 years ago.

There was a period when I wrote four or five books in about two years, but that's slowed down a lot, mostly because I have a couple jobs and two kids and not enough brainpower to write most nights after they go to bed. I should point out, too, that of those five, only two actually sold. One got really close, so I'm reworking it now, but the other two are currently sitting in a drawer, waiting for the right time or idea to come. So maybe it's not good that I write quick.

Much of your work is based in Baltimore. Is that simply a function of where you live?

I just think Baltimore's a really interesting town. It always got a bad rap, but there were a lot of great things going on. Pop-up galleries, small arts spaces where we used to play with bands, various moped gangs. It's a city of neighborhoods, basically.

For instance, I lived just north of a big Central American area. Lots of pupuserias, bodegas, stuff like that. But there was this one-block neighborhood that spoke mostly Mixtec, an indigenous language from Mexico. The parents didn't even speak Spanish, much less English, and the kids had to try to translate for them. There are lots of little things like that that I found endlessly fascinating.

I've since moved out of the city, largely because of my kids. Baltimore has never been a safe town, but [it] has just gotten wild over the last few years. When we lived there, there was always a sense of, "If I leave people alone, they'll leave me alone," or if you get robbed, just give them whatever you have and move on. That feeling of immortality you have when you're 24. But a couple people I knew were murdered randomly, sometimes during a robbery and sometimes just because, and we didn't want to put our kids in the middle of that. So we moved to a county with a huge teenage heroin epidemic. (Shrug.)

I've continued to write about the city in the book I'm working on now, but I've also felt a little more confident in writing about other places, specifically Mexico and Colombia. I was always scared to write about places like that, mostly out of concern for coming off as the güero who's playing where he shouldn't be, but I feel like I can do a better job since I've been reading local papers for a couple years and talking to some friends who live there. But writing about countries — specifically Latin-American countries — as a gringo is a whole different, though really interesting, convo.

What's on your nightstand? I mean, book-wise.

My wife actually just cleaned off my nightstand because she said it gave her too much anxiety. Off the top of my head, I had Coyote Songs by Gabino Iglesias, Relato de un Náufrago and Doce Cuentos Pegrinos by Gabo, Memorias del Águila y del Jaguar by Isabel Allende, The PMA Effect by John Joseph from Cro-Mags, Ghosts of Spain, La Virgen de los Sicarios, and a couple other things.

Next three books I'm stoked to read: Hell Chose Me by Angel Luis Colón. Bestias by a Colombian guy whose name I can't remember. Mouthful of Birds, a translation of Samantha Schweblin — who everyone should read — and her new one, Kentukis, which I probably won't understand. And, of course, The Unrepentant. That's what you wanted me to keep by my bed, no?

On your pillow, actually. What do you have coming up next?

I have a short-story collection coming out in May with Down & Out — I honestly can't remember if I've talked about this yet or not — called Wear Your Home Like a Scar that I'm incredibly excited about. It has some reprints, stories I rewrote, a couple stories from anthologies that went under the radar, and a couple new ones. I should also have something else cool to talk about soon, but it's not finalized so I can't say yet. (Side-eyed vaguebook.)

[Author’s note: Nik Korpon will be appearing with Gabino Iglesias and S.A. Cosby at Conversations and Connections at George Mason University in Arlington, VA, on April 27th. Click here for more information.]

E.A. Aymar’s newest novel, The Unrepentant, comes out in March.

An Interview with Asali Solomon

The author’s latest novel explores the challenges of growing up black in a white world.

An Interview with Peter Bergen

The journalist and terrorism expert discusses his latest book, United States of Jihad.