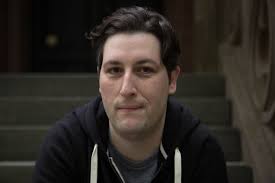 In Mike Scalise’s memoir, The Brand New Catastrophe, illness is a competitive sport. His mother suffers from a chronic heart condition, which leaves her the undisputed “best sick person” in the family until Mike is felled by a ruptured brain tumor on the pituitary gland at age 24.

In the ensuing years, the two navigate their relationships with each other, their loved ones, and their medical communities. Hilarious and insightful, Mike’s prose takes us on a journey that ultimately demonstrates our ability to weave stories as a weapon with which to combat our own human frailty.

Mike and I met at George Mason University in a Creative Nonfiction MFA program. We recently reconnected when he was in DC for his book tour. The following is adapted from a conversation online.

When I read Brand New Catastrophe, I thought of Lucy Grealy’s Autobiography of a Face, which examines how her ever-changing appearance due to reconstructive surgeries after cancer impacted her identity. How important was exploring that physical/psychological relationship in writing your memoir?

It's so nice you thought of Grealy. I really admire the way she situates her illness in Autobiography of a Face, exploring a kind of unique double-tension when it comes to appearance. Who am I to the people who see me? and Who am I to my own eyes? Both can prove very elusive in the wake of a body-shifting illness. I can't speak for what pulled Grealy toward that territory, but for me, it was a persistent sense that my body had slowly ambushed itself without me (or anyone) noticing.

It produced a very useless stew of guilt, frustration, and a feeling of nebulous betrayal that forever blurred the line between where a disease ends and a person begins. It was important to explore that in the book, especially because that visual duality remains such an unresolvable thing for me — and perhaps other diagnosed acromegalics, too.

There are two answers to this question, one smart, and one true. The "smart answer": It's a behavior my father displayed in the wake of my diagnosis that unlocked surprising, essential aspects of both of our characters. The event you're talking about — after learning I had lost all my testosterone, my father emailed me weekly PowerPoint presentations loaded with pornography — first materialized in an essay I wrote in grad school, where you heard it. It contained too much info about my father's most revealing motivations that it was impossible, later, to leave it out of the memoir. From there, it was just a matter of making it fit.

Illness often doesn’t have an end point, but a memoir needs a conclusion. At what point did you realize your book would finish with the scene it did?

I'll keep things as vague as possible as to not give too much away, but the answer to this is "as it happened." While writing, the book had been stalled at about the halfway point for reasons I couldn't figure out. The writing worked, and I knew that, but I couldn't see a way forward for a long time, which felt strange, considering the book is made up of events that happened to me.

Then someone I trust said, "Well, maybe you haven't lived the end yet," which was right. But it also turned me into this horrible life vampire, searching every day for hints of what might wrap up the book. So, when that opportunity came, I was mentally ready and had been seeing reflections of the book's threads and themes in my day-to-day life for many, many months. And then, these curious symmetries began to emerge. That's the best way I can put it without spoiling anything.

Your book has landed on lists for best memoirs about illness, healthcare, and mommy issues, but my favorite thread is the one about the power of storytelling. Could you talk about how that trope shaped your work?

It's funny you use the term "shaped," because that's exactly what happened. I had a draft of disconnected anecdotes, and I liked them, but I couldn't bring them all together for some reason. There was no binding element, or at least one that worked for the story I aimed to tell. I felt very lost. So I went back to the very first thing I wrote about my tumor — this acerbic, meta, how-to manual about socially navigating a medical catastrophe. It wasn't good writing, but it had this confidence that I no longer possessed. A kind of certainty that seems only possible in the fog of youth.

So I took one line from it — "Telling a good catastrophe anecdote means becoming a maestro of sympathy" — and started to use that voice to build these "lessons" about how to tell disaster stories. It provided that perspective and backbone to the book that I had been looking for. It also allowed me to put that kind of confidence on trial and structure the book as a firm interrogation to figure out where it went, and why.

What is next for you, writing wise?

A ton of stuff, mostly fictional. I'm happily juggling a bunch of projects, none of them about brain tumors or hormones. It’s exciting.

An Interview with Laura Zam

John Maxtone-Graham devotes his considerable knowledge and impeccable prose to a discussion of salient, provocative and rarely investigated components of the sinking of the Titanic.