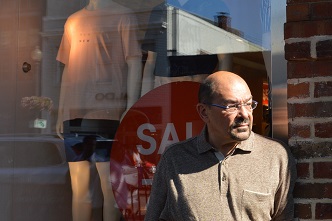 Mike Maggio is an accomplished writer and poet in the Mid-Atlantic Region. His Cloudism and Springtime in Winter are ekphrastic projects; Maggio describes these collaboratives as “project[s] where artists and poets work together, feeding off each other’s creative processes and learning from each other in order to produce something new.”

Maggio has been published in the Potomac Review, Pig Iron, Phoebe, Atticus Review, and elsewhere, and he’s the author of two novels: The Wizard and the White House (2014) and The Appointment (2017). He has also penned several collections of poetry, the most recent being Garden of Rain. I spoke with him last week.

Talk about your new novella, The Appointment, as well as Garden of Rain.

The Appointment is a story that I started quite some time ago, prior to writing my novel. I started working on it while participating in a workshop at the Writer’s Center [in Bethesda, MD]. I put it away and then, some years later, after completing the novel, I took it out and began revising it, so the finished product is quite different from the original. It’s a story of an aging professor who gets attacked by a youth gang on the subway one morning and is left for dead. Death is the major metaphor of the story, for [the professor] is, ultimately, dead to the world. He is at the end of his life, a life in which he has not really accomplished anything. So, in the story, the literal informs the figurative, though the literal itself is quite dreamlike. Hence, the reference to Kafka on the cover.

Garden of Rain is a collection of poetry I put together as a retrospective. It contains newer poems written in the last couple of years, as well as much older ones going back to the 1980s. It contains some personal poems, as well as what I like to refer to as my spiritual poems: “Clouds,” for example, or “The Birds Begin at Four,” my feeble attempt at writing Sufi or mystical poetry. Regardless of the subject matter, however, my main focus in poetry is image and rhythm. These are, I believe, what make poetry come alive for the reader.

Discuss your mindset when approaching a poem versus a piece of fiction.

Writing poetry is very different from writing fiction, and I find it difficult to switch from one to the other during the same writing session. For poetry, I often start with an idea much as I do with fiction. But with poetry, that idea is often abstract. It could be as simple as a rhythm that comes to mind: one which has no words, which I then must fill in. At other times, it could be a line that comes to me while I’m driving, for example, or doing something other than writing.

Fiction, on the other hand, often begins with a more concrete concept: a scene, perhaps, which contains conflict, or a character that appears in my head. The Appointment began that way: a character who suddenly finds that he is going through life without living it. In fact, it was originally called Diary of a Dead Man.

But for both fiction and poetry, it seems that, while writing, one is connected to something other than self. It is a sort of channeling because things come to you almost effortlessly: lines of poetry, dialogue, entire scenes. As I often tell people, somewhat tongue-in-cheek: “I hear voices.” But then the hard work comes: the editing, the forging of these elements into something viable and cohesive.

Considering your collection of poetry deMockracy, where you are unabashedly critical of the Bush administration during the Iraq War, how do you think a writer should approach politics? Is it a balancing act?

This is an interesting question, one I have thought about often since deMockracy was published. One needs, I think, to make the distinction between poetics and polemics. One needs to try to balance those two things. Unfortunately, this is not the case for deMockracy, much of which is pure polemics. Pure anger. Justified anger, but anger nonetheless.

Now, in the Age of Trump, with all the rage that that phrase conjures, we are tempted to write polemic poetry, but I have very consciously tried not to. In fact, I recently wrote a poem called “Sharks” which tells the story of a village that refuses to believe that there are sharks on their shores even though everyone is falling victim to them. And, so, with this little parable, if one may call it that, comes an exploration of fake news vs. real news and belief in other than the truth — that which stares us straight in the face but which many people are simply blind to. This is done without once referring to the current situation. And without anger or any emotion.

How do you feel that collaboration with others deepens your work?

Collaboration is something that I think every artist should do at least once. It broadens your perspective. When you truly collaborate — bouncing ideas off of each other, letting the work flow naturally, allowing yourself to be influenced in ways you never imagined — then the end product can be truly spectacular.

Talk about your journey as a writer.

It’s been a long one, starting at about age 9. As you go along, you learn and then you specialize — take classes, meet other artists and writers, and grow. I think the key is to open yourself to each and every possibility. I believe my most memorable endeavor so far has been Cloudism because it allowed me to express myself in ways I never thought possible. And it led immediately to a creative streak of other performance possibilities; some, like Music for Mummies, which have been realized, and others which are waiting to be done.

I think I am going more and more towards collaboration and, somehow, I want to include other disciplines — engineers and physicists, for example — in the mix. I have no idea how that would be done or what would come of it. But the idea excites me. Leonardo Da Vinci, after all, intersected both art and science. Shouldn’t we follow his lead?

What are your future projects?

Currently, I am working on a gothic novel. I hope to finish that up within the next year. Then, I have ideas for three other novels. I have two unpublished poetry manuscripts I am looking to place. And I want to do more collaboration — more performance with both actors and audience and with other disciplines. I’m always looking for others to work with.

[Editor’s note: Mike Maggio hosts a new reading series the first Friday of each month at ArtSpace in Herndon, VA. “We have features and an open mic, and we want musicians, poets, and performers of all stripes to come and share their work,” he says. Click here for more info.]