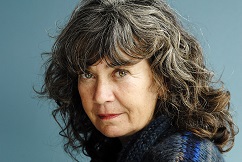 Melanie Wallace’s new novel, The Girl in the Garden, is a dramatic and mysterious tale about what happens when a small coastal town finds its seemingly sleepy ways interrupted by the arrival of young June, her baby, and a man who abandons them at the first opportunity. As June and her child attempt to settle in, the lives of the townspeople are forever changed by the sudden discovery of well-guarded secrets.

How was the writing process of The Girl in the Garden different from your previous novels?

I was in a full-time staff position — which meant, very often, working 50 or more hours per week — while writing The Girl, so the “process,” if I can even use that word, was extremely disjointed: weeks often fell between paragraphs, at times even between sentences, and there were moments when I felt I’d really rather be pounding nails into my head than trying to earn a living while continuing with the novel. Worse, I had the comparison of having written one of my two previous novels under the best of circumstances, with a great deal of time on my hands while living in a small, very quiet Greek mountain village.

Was it challenging to write the story from so many POVs?

I actually can’t claim to have told the same story from different POVs, but I did try to use one narrative “voice” — a stylistically consistent one — to describe the different experiences of the several main characters while giving each a singular way of speaking and his/her own take on the world. As the novel took shape, it was a relief to concentrate on one character at a time and interweave their very different lives and disparate experiences into what I hoped would be a cohesive story that allowed these characters to come together and interact — believably — with one another in one place.

I know that you currently live in Greece. Was this sleepy New England town in the novel inspired perhaps by the coastal villages of Greece?

I’m sorry to disappoint, but, no. Greece — where my husband and I have lived off and on over the last 25 years (in Athens at times, off and on for 17 years in the Greek village I earlier mentioned, and now here, in Thessaloniki) — has always been and still remains for me a distinct and parallel universe to the world I came from, the one I’m obsessed with, the only one (at least until now) that provides the basis for my fiction. Which I consider purely American.

None of the characters in this novel are simple. They are exquisitely multi-layered and complicated. Was there a particular character that was difficult for you to write?

As I’d never before structured a novel in this way, I came up hard against the fact that the characters all demanded in-depth descriptions of their dissimilar backgrounds in order to make their relationships with the other characters credible. Sam, the Vietnam veteran, and Iris, the recluse who, after her husband’s death, turned her back on everything (including her daughter), were the characters who most resisted coming fully into focus at the start, but eventually — and somewhat surprisingly, as if I’d had nothing to do with their creation — each took on their respective personas.

Conversely, which character was your favorite?

In many ways, Claire — the photographer who is Iris’ daughter and who doesn’t have a discrete section to her name — is my favorite, as she embodies certain preoccupations I have concerning the nature of return, the importance of memory, the meaning of photography, and the constancy of love.

The book highlights that unique bond found in small communities, where everyone knows who’s who. Would you say it’s the secrets that each of them keeps that tie them together?

Overall, those secrets of course tie certain characters to others, but the unspoken — such as Duncan’s love for Claire, or Iris’ refusal to discuss the past with her daughter — also serves to hold certain characters at arm’s length from each another and so forces them to resolve their relationships by circumventing those secrets.

Do you see June and her baby as the catalyst that opens up old wounds for everyone in town, or more as a vehicle for healing those wounds? Or both?

Both. June is central to the story because happenstance brings her into the lives of all the other characters, so in this sense she’s a catalyst that prompts the revelation of their stories and secrets. In another sense, because her mere presence has caused others to grapple with their memories and, in some instances, with sentiments long suppressed, she — unknowingly — becomes the reason other characters are able to come to terms with their pasts.

Did you have the ending planned when you started writing the book?

I never know how anything will end, least of all any work of fiction I begin. But, of course, at one point — I’m not sure exactly where in the novel, or when in the writing of it — certain inevitabilities that became the end were clear to me.

I’m actually working at learning how to be a dressage rider. As to fiction and nonfiction, well, at this moment, I’m simply letting thoughts, words drift about and come to me as they may — but only after dismounting.

An Interview with Juris Jurjevics

To honor the author, who passed away Wednesday in New York, we rerun here an interview he did with the Independent in 2011.