An Interview with Lucile Scott

How the author wove disparate threads into a single, expansive work on American mysticism. 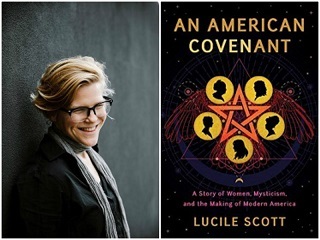 The stock advice that first-book writers receive is to keep their projects manageable in scope and length — focused on a single character, arranged chronologically, easy to explain to potential readers. But if Lucile Scott ever heard that cliché bit of condescension masked as wisdom, she ignored it.

Her first book, An American Covenant, released earlier this month, is sprawling and ambitious. Both a history of American mysticism focused on five female mystics and a memoir, its narrative touches on several continents and three centuries, and writing it required historical research, travel, and contemporaneous reporting.

It’s easy to imagine such a book becoming overly digressive or muddled, or that its writing and reporting might drag on for years, causing it to lose relevance, but Scott’s book suffered neither fate. Its narrative is focused, its prose is sharp, and the timing of its release — on the eve of an election that has millions worrying over the nation’s soul — is impeccable.

An American Covenant is, among other things, a revisionist history. Each of the characters you write about was well known in their time but has since become obscure (with the exception of Marianne Williamson). What accounts for that transition?

The answer comes down to one word: power. In most American mystic traditions, the natural world, including each and every one of us, stands as divine as anything on high in the sky. This belief has long begat radical notions of the equal right of all to a decent life here on earth — regardless of race, gender, profession, etc. This, of course, has the bonus of dovetailing nicely with our nation’s ever-aspirational founding words.

As such, the American feminist mystic has especially appealed to those denied — but demanding access to — those “self-evident” rights. Women have long been drawn to the mystic by its message that they, too, can direct dial the divine via their own body, instead of only via a male cleric, and an acceptance that those same bodies are human sin and weakness incarnate. They have also often been empowered to be leaders of these movements. Queer folks have long tapped the power of the liminal to build their own affirming culture in the face of a mainstream one that spurns them as some spectral threat to all that is holy and good. Many communities of color turned, and turn, to mystic traditions with roots far older than the idea of the New World.

Needless to say, this threatens the American patriarchal powers-that-be by empowering all those they seek to control. And so, once we could no longer acceptably burn (or hang) feminist mystics, we were taught to mock them — call them weak, silly, and muddleheaded — and ground them down into a spectral historical footnote.

And what did the country lose when your subjects became obscure?

From 19th-century feminist mystics to modern-day tattooed, crystal-carrying witches looking to #HexThePatriarchy, the American feminist mystic tradition has aggressively advocated suffrage then women’s liberation, abolition then civil rights, labor rights, environmental conservation, and on and on. I think honoring these women’s legacies would have shifted our dominant American myths, which, be they religious or secular, tend to only reflect the perspective of white men. And this would have inserted the aforementioned values of equality more deeply into the national psyche. But I also believe celebrating them now could help us recast our outmoded national narratives into a foundation for a better future.

One of your characters, Marianne Williamson, recently attempted to become the Democratic Party’s presidential nominee. The most notable moment of her campaign may have been her comment, during a primary debate, that Donald Trump was responsible for bringing up a “dark psychic force” of collectivized hatred. She was mocked for saying so at first, but soon, reaction seemed to shift, and people seemed to acknowledge that she was speaking to something real that had gone unmentioned in the primary race until that point.

To most of us, it’s pretty clear that forces that do not dwell in the rational realm are currently navigating the course of the nation. Marianne did us the courtesy of naming the phenomenon. Though it’s no wonder that the first reflexive response was resistance. For centuries, many, especially in the West, have clung to a belief that the world can, and should, be navigated entirely via rational forces, often pretending the other, deeper aspects of our minds and world don’t exist. Sometimes, this is helpful. Take science. Other times, like now, it is not. Or to quote “The Usual Suspects,” “The greatest trick the devil ever pulled was convincing the world he did not exist.”

An American Covenant incorporates historical writing, memoir, and reportage. Often, each of these elements is present in a single chapter, meaning that your narrative could, in a given section, include scenes from the 1800s, the 1990s, and 2018. It’s a challenging thing to cohere such disparate material, but you managed it. Did you create any compositional rules for yourself to avoid losing your readers?

I guess my main rule was flow. I wanted the historical sections to naturally segue into the more modern memoir segments and vice versa. This could include me partaking in a present-day mystic event relevant to the history being discussed in a given section; a connection between something occurring in one of the feminist mystics life and in my own; or just a certain thematic coherence.

Your source material was another thing that struck me. As I read, I could feel you straining against the limitations of available sources in some chapters. Some of your characters lived lives that were full of mythmaking, travel, and action, but which created few primary documents. I wonder whether, as a writer, the lacunas in your characters' lives made you feel trapped, or whether they made you feel that you were free to wring meaning from the myths surrounding them.

That’s such an interesting way of phrasing that because the lacunas do feel part and parcel of each of these women’s stories. Still, despite the holes, I could find enough primary sources to easily dramatize four of the women’s lives. However, no one ever taught Voodoo queen Marie Laveau, a 19th-century woman of color, to read or write. As a result, the holes in her story are more like a chasm. But it’s in that chasm that the myths grew, and the two distinct legends that emerged reflect a fascinating story of America. In one, created by white writers during Jim Crow, Marie is powerful yet satanic. The other, forged via the oral tradition, paints her as a symbol of liberation to people of color throughout New Orleans, both in life and after her 1881 death.