An Interview with Lauren E. Oakes

The scientist talks climate change, dying Alaskan trees, and identifying your personal canary in the coalmine. 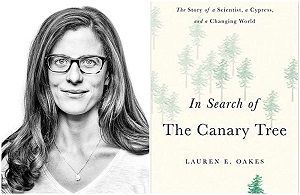 As the title of her new book implies, Lauren E. Oakes is In Search of the Canary Tree. She is a conservation scientist and climate-adaptation specialist at the Wildlife Conservation Society, and an adjunct professor of earth system science at Stanford. Her unique approach to studying trees in remote Alaska utilizes interdisciplinary science to look at the effects of climate change on both the environment and people.

Science starts from a good, crisp, well-crafted question. What is your big question?

My journey on the outer coast of southeast Alaska started with what I thought was a pretty straightforward ecological research question: “How does the forest develop after the yellow-cedar trees die?” I knew climate change was taking its toll on this one species, Callitropsis Nootkatensis, but I wanted to know what individuals and other species could still thrive amidst the loss and change. What ultimately became most important for me to answer personally was the more philosophical question: “What does this tree have to teach us?”

That question forced me to discover the parallels between what the forests were experiencing and what human communities across the planet may face in the future when it comes to climate change. It forced me to resolve how I can still live optimistically and purposefully with what I know as a scientist who spent years of her life studying a species pushed to its limits by rising temperatures. Some people have a doom-and-gloom outlook of the future, but I still think there’s a lot that we can do to confront climate change and cope with its impacts.

How much of what happens to the trees determines what will happen to people?

These trees exemplify what many people fear most about climate change — that there’s a threshold for every species and, at some point, we, too, may be pushed to our limits of survival in this warming world. Scientifically, I can’t say that what’s happening to these trees or how the forests are changing, or even how the people in southeast Alaska were responding to their death will determine what happens to people across the planet. But there are certainly lessons I carry with me from this canary in the coalmine.

What are we learning from the effects of climate change on trees?

First, in the forests that were highly impacted by climate change, not all of the yellow-cedar trees were dead. There were still survivors standing tall and green and carrying out their lives amidst change. Second, I found that with the passage of time, the forests could recover and flourish again. Some species could still thrive under the new conditions. So, what does that all mean for people? Similarly, some human communities will be hit harder than others by climate change, and we’re already seeing this occurring with fires, for example, droughts, and coastal inundation.

You talk about having a commitment to place and the importance of studying an environment, a people, and the relationship between the two. Why is this so important?

Personally, and scientifically, I see a lot of value in working at a local scale. When I started my Ph.D. at Stanford, many of my colleagues were designing projects that relied on big data and advanced modeling techniques using the latest technology. I thought that working at a smaller scale could provide a depth of knowledge into how one place and its people were responding to the impacts of climate change.

We need big data for predicting, for example, global average temperatures under various emissions scenarios, and those efforts are really important, too. But I think understanding what happens at the local scale in a changing climate is also critical because that’s where people’s lives are carried out.

Working in one place allowed me to experience what I was studying. I wasn’t removed from the data, nor restricted to understanding the trends through a computer program. I lived them. I spent months of my life amidst those dead and dying trees and listening to the people coping with their loss. Hard as it was for me, I think that personal element is also what pushed me to search for deeper meaning from my research. It’s what forced me to write, to grapple with, my own future outlook and, ultimately, to discover a lot of motivation to tackle this problem.

Should scientists be activists, or is science best when the humanity has been taken out of the process? One concern you share is that ecologists may simply monitor a species to extinction. When do you see the need for science to end and activism to begin?

I don’t think we can ever take humanity completely out of the scientific process, but the process itself asks us, as researchers, to do our best. Just the simple act of writing in the third person, for example, allows the reader to focus on the scientific method rather than the person carrying out that method. “We measured 2,064 trees and 882 saplings.” Those fives words that I wrote in a scientific publication edited out all that I experienced more personally — all that I exposed in my book. But the results of the research were the same, just presented in story or more scientific language. “2,064 trees and 882 saplings were measured,” removes me entirely.

I’m frustrated by the fact that climate scientists or ecologists who speak about their concerns are often perceived as activists. I see human and environmental health as inherently intertwined. The impacts we’re having on the environment ultimately filter back to people through the air we breathe, the water we drink, the food we eat, and the temperatures or extreme events we experience.

I’m married to a medical doctor who works in global health, and I find it fascinating that he and his colleagues can make recommendations to government officials, for example, to reduce the chances of an epidemic, and that work is considered “in the public interest.” But when a climate scientist, like Dr. James Hansen, speaks out, he’s overstepping his bounds. I disagree.

Does truth lead to change? How does a scientist deal with illogical thinking that is counter-scientific?

Truth can lead to change, but I think it rarely does so on its own. Any new discovery, or knowledge gained, requires a pathway to reach a broader population. Whether it’s a new technology to reduce emissions, or a cure for a disease, a solution to a problem that’s uncovered through research requires a plan for implementation and direct action to make a difference in the world.

It requires storytelling to make the scientific language accessible and the relevance of the discovery compelling. It requires motivated leaders across various sectors and engaged citizens. I admire the scientists who were not afraid to share their discoveries in creative ways. Galileo etched his observations of the moon; Rachel Carson documented the risks and impacts of DDT through story.

When it comes to facts and climate change, there’s still a population of people, including our current president, that refuses to listen. At a national level, recent polls actually show a greater awareness and concern about climate change and less division between political parties than one might think.

It’s hard to say what’s the best approach to dealing with illogical and counter-scientific thinking. Journalist David Wallace-Wells recently wrote an opinion piece in the New York Times around the release of his book, The Uninhabitable Earth: Life After Warming. Wallace-Wells argues that we need to embrace catastrophic thinking, that sheer panic is what will trigger action. I’m not sure. The doom-and-gloom outlook can lead us to think the problem is insurmountable, so nothing we do to address it really matters. It alleviates us from responsibility. And panic, the fight-or-flight mentality, doesn’t always lead to the most strategic responses.

As climate change continues to affect people across the planet, ultimately, there will be a canary in the coalmine for every one of us. Some aspect of what’s happening will hit us personally and awaken us to the reality. That’s what I experienced personally, and also what I found from the many interviews I conducted in Alaska. Who, or what, will be your canary?

Tyler Cymet, DO, is the chief of clinical education for the American Association of Colleges of Osteopathic Medicine. He recently completed a video textbook on manual medicine for Lecturio and is the author of Health Info to Go and Genomic Medicine and the Generalist Physician: Predicting a Flood When It Has Just Started to Rain.