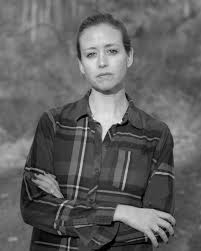 In Find Me, Laura van den Berg’s debut novel, the protagonist, Joy, has always been on the edge of survival. Abandoned as a baby, she grew up in a series of foster homes. Now a young woman, she works at a grocery store and lives in a windowless basement apartment. When a mysterious “forgetting” disease sweeps the nation, Joy realizes she is immune. She spends months as a test subject in a strange medical facility in Kansas. When she discovers her birth mother’s identity by chance, the urge to find her grows. This triggers Joy’s escape from the hospital and the meandering journey across a mostly ravaged country that follows.

Like many readers, I interpret dystopia as a metaphor for all the ways life can break us. There’s often a delicious atmosphere of isolation and despair, yet the characters are surviving it all the same. Maybe I’m dark, but I find this aspirational, a valentine to human strength. Why are you drawn to writing dystopia? What wisdom does the form offer?

I do tend to agree with what you’re saying about dystopias having the power to feel aspirational. Despite the collapse of civilization as the characters know it, they still persist, but I think they can also expose the ways in which our societies are irrevocably damaged, our way of life unsustainable. Joy was always the center of Find Me, and because she is a character with so much damage and so many walls, I felt like it would take a radical catastrophe and its aftermath to break her through to a place where she was able to begin to heal.

The disease that sweeps America makes people forget who they are before turning their brains to mush. Joy is immune. What’s interesting about this detail is that Joy doesn’t have a strong sense of self in the first place. She’s abandoned by her mother as an infant; she has repressed childhood memories; and she stays numb by drinking cough syrup. On some level, Joy’s lack of identity is her immunity, which accounts for her survival. Is the novel a cautionary tale about the dangers of being too sure of ourselves?

Joy does float a theory of the sickness near the end of the novel, when she says her own memory had already done the work the sickness wanted to do, the work of forgetting — she was too damaged for the sickness to take an interest in her, in other words. That's hardly a theory grounded in science, but I do think it's an interesting notion, that this great vulnerability has made her invulnerable to the epidemic. Though her immunity remains something of a mystery, I would argue that Joy’s childhood has trained her well for catastrophe in many ways, namely in that it taught her how to survive, how to keep going, though of course that knowledge has come at a huge cost.

Joy spends months on lockdown in a medical research facility. The methods used at the hospital are based on mind/body healing and alternative medicine. The contrast of this ridged institution and airy-fairy placebo medicine made me laugh. Were you being wry, or do you think opposites can come together during times of crises?

I do see Find Me as being laced with dark humor, so some of that wryness was intentional, for sure. That said, "official" agencies do oftentimes seem woefully inept when faced with disaster, and the hospital strikes me as an extreme example of that. And I find the field of psychosomatic medicine very interesting, which is certainly reflected in the book — that connection between mind and body wellness, how the two can powerfully speak to each other.

At the hospital, Dr. Bek tells Joy, “The world is a very fragile place.” The phrase stuck with me through the entire book. But then I thought: The world isn’t fragile, people are. Then I revised that to, people aren’t fragile, their systems and their illusions are. Now I don’t have the answer, but it seems that in both the book world and the real world, fragility and endurance are everywhere at once. Any thoughts?

Yes, absolutely — I do see fragility and endurance as sitting alongside each other. In fiction, I’m often drawn to sharp contrasts, and I liked the idea of creating a world in which fragility and fortitude could be explored with equal interest. Most people are very fragile in some ways, or feel that they are, but also are tougher than they know and can rise when tested. And the world in which we live is at once fragile and very resilient, too — though growing unarguably more fragile in some ways (e.g., the environment), which might account for the wave of dystopian literature we've been seeing. There is, rightly, a lot of anxiety about our future: Where is the breaking point? When and how will it come?

Throughout the novel, there’s a theme of characters trying to cure each other, in some cases to disastrous effect. Also, masks and disguises show up several times. What do these themes mean to you as a writer?

Oh man, I’m obsessed with masks! That trope comes up again in both my story collections. In terms of Joy’s character, parts of herself, her own history, have been masked, in that they’ve been hidden away from her, and I think seeing masks manifest in other parts of the book speaks to that struggle, to the slippery and shifting nature of identity and memory. Sometimes we regard who we are and what we know as fixed quantities, but are they really? For Joy, I would say they are not.

Joy’s foster brother Marcus, from years before, shows up almost miraculously halfway through the novel, and they journey together toward Florida. He’s a mysterious figure; wearing a mask to hide a facial injury, his character remains just as inscrutable. I think readers could have a debate over whether Marcus is actually there or just imagined by Joy.

Yes! I think so, too — and I would love to eavesdrop on that debate. I wanted to open that door, to make room for some ambiguity there. I think Marcus is very necessary to Joy carrying out her quest to reach Florida, but as she becomes more certain in herself, Marcus’ presence begins to fade. And that can be interpreted in multiple ways, as you suggest, but nevertheless, Marcus is very real to Joy and so he was always very real to me as a character.

Everything begins and ends with motherhood in this book. I don’t want to spoil it by saying whether Joy finds her mother, but I will say that I worry for Joy’s future whether she finds her or not. How could the woman who once abandoned her really be the antidote to Joy’s suffering?

That's a good point. One thing Joy begins to understand by the book’s end is that she’s the antidote, as much as any kind of antidote exists. The last paragraph is made up of directives — at long last, Joy is the one in giving the orders — and I see that as a shift away from looking to her mother for a “cure” and toward a greater measure of self-reliance.