An Interview with Kim Adrian

The writer talks socks, reader takeaways, and the trickiness of crafting a totally honest memoir. 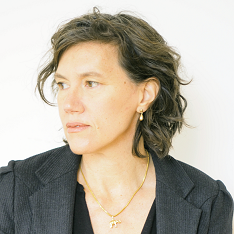 You’ve long been an essayist. Did you approach your memoir as something of an essay writ large, or did it feel like a different animal altogether?

I thought of it as an essay writ large. But I probably think of essays differently than a lot of people. For me, an essay is an investigation, a very organic thing. Every sentence you commit to it opens up the field of discovery a little more and you basically let it work to take you where it needs to go. That was my aim with The Twenty-Seventh Letter of the Alphabet. Although in the end the work got sufficiently large that I had to do things I don’t normally do with essays — pull it all apart and put it back together while considering things like chronology and narrative tension.

Aside from the challenge of crafting a compelling narrative, memoirists have the added burden of deciding what to reveal about others’ lives in the course of telling their own story. In recounting your fraught childhood in The Twenty-Seventh Letter of the Alphabet, did you hesitate to include certain details that ultimately made it in?

There was a lot of hesitation in the beginning. Two very hesitant drafts, in fact, that sort of just lay down and died. There simply wasn’t enough to them. I’d held back too much. But when I finally committed to really writing this book, I knew I had to be as honest as possible, and tell the story in as straightforward a manner as possible if it was going to work. At that point, those kinds of decisions became a lot easier, though they were still hard.

I remember one scene in particular that hung me up for a long time. I just couldn’t decide whether it was actually okay, morally, for me to write it. This is the section now called “Hidden Contexts,” but for a long time, it was called “Booger Board,” just to give you a sense of what it’s about. The very fact of the “booger board” seemed so gross and embarrassing — not for me so much as for my mother — that for ages I worried it was just wrong to put it in the book. But ultimately I decided that this particular object was so telling, so potent a demonstration of my mother’s illness, and such a clear metaphor — nothing I had to create, but a real-life, naturally occurring metaphor — for her childhood trauma that it had to be in the book.

Honestly, I’m still not sure whether or not it’s “okay” that I put in, but I also know the memoir would have been incomplete without it.

What do you hope readers take away from your memoir?

Maybe some readers will see more clearly the diffuse ways mental illness affects everyone around the afflicted person. And some might think differently about making hard choices — like, should you save yourself, or should you continue to try, however futilely, to save a loved one even if it means slowly destroying yourself in the process? That’s a hard nut to crack, a common problem, and I know many people who suffer with it. But these are “takeaways,” and while I hope this book has a couple of those, the thing I’m always more interested in myself, as a reader, is rarely the takeaway so much as the sense of friendship or understanding you can have with a book you really connect with. When I love a book, it’s because of this feeling. I’ll never know if some readers might experience that with this memoir because reading is such a private activity. But if I could know about it, and it did happen, it would make me happy.

You wrote Sock for Bloomsbury's Object Lessons, a series we’ve covered in the Independent. How did that assignment come about? Was something missing from the national stocking-related conversation?

I settled on the subject almost by chance. Originally I’d pitched the idea of writing about knitting because I’m a longtime knitter, and I’m interested in examining domesticity. But the Object Lessons series is, obviously, about objects, and knitting is an activity, not an object. I remember lying awake in bed the night after I’d emailed my pitch, and realizing this, then kind of manically cycling through all the objects I could think of that were related to knitting that I could write about instead. In the morning, I sent the editors a quick note amending my pitch and suggesting that, instead of knitting, I could write about socks. I kind of just pulled it out of the air. I’d never knit a sock in my life. I still haven’t. But I’m very interested in the mundane. The ordinary. The easily overlooked. In this sense, the sock was a perfect subject for me.

Who are some of your favorite authors working today? Are there any who especially inspire you or influence your own writing?

I’m writing a book right now about Karl Ove Knausgaard’s six-volume novel, My Struggle, and I’ve spent a good chunk of the last year reading whatever I could find by him that’s been translated into English, so he’s way up there on that list. I’ve also recently enjoyed The Gift by Barbara Browning and The Argonauts by Maggie Nelson. These writers work in ways you can’t easily categorize. But all three of these works have hefty strands of critical analysis woven into more personal narratives, and they all develop a kind of philosophical premise that unfolds in a very natural, idiosyncratic way.

There’s nothing more frustrating than being asked “what’s next?” when you’ve just finished a major project. So, what’s next?

The book about My Struggle that I just mentioned is a big focus right now. It will be published as part of Fiction Advocate’s Afterwords series. It’s literary criticism, but from a personal perspective. That’s a mix I love working with, so it’s exciting to write something a little longer than an essay in this vein. I’m also writing a libretto for an opera called The Strange Child, based on a fairy tale by E.T.A. Hoffmann. The music is being written by my friend Julia Werntz — a brilliant composer who works with microtones, which comprise a much more complex scale than the one we’re used to in traditional Western music. This project is way outside of my wheelhouse, but in a good way. It’s a lot of fun.