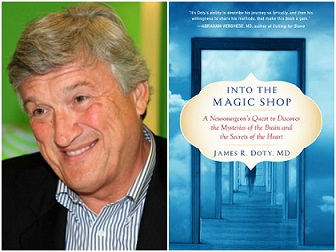 In his book, Into the Magic Shop: A Neurosurgeon’s Quest to Discover the Mysteries of the Brain and the Secrets of the Heart, James R. Doty takes us in search of ourselves by sharing his own story of emerging from a troubled childhood to eventually helming the Center for Compassion and Altruism Research and Education at Stanford.

Says fellow physician/author Abraham Verghese, “Into the Magic Shop is pure magic! That a child from humble beginnings could become a professor of neurosurgery and the founder of a center that studies compassion and altruism…as well as an entrepreneur and philanthropist, is extraordinary enough. But it is Doty's ability to describe his journey so lyrically, and then his willingness to share his methods, that make this book a gem."

What draws an atheist like yourself to learning from magicians and religious leaders?

In some ways, magic and religion are alike. Both magic and religion use techniques to make people believe. Beliefs can be extraordinarily powerful in terms of their effect on one’s psyche, one’s physiology, and one’s actions. In earlier times, magicians were felt to harness the power of the supernatural, as did religion. In some religions, magic was combined with religious practice.

With more knowledge to explain events that occurred in the physical world, less belief in magic and religion has occurred. Additionally, in earlier times, religion was used as a mechanism to impart in people morals and ethics, with the belief that there was someone watching their actions and judging them. Further, because of the existential angst associated with us as a species perceiving our own finality through death, a mechanism to assuage such by having [a belief in] everlasting life was helpful.

For myself, I don’t need religion to give me a moral or ethical framework nor to give comfort in terms of the reality of my own death. I do find it fascinating how religious leaders inspire individuals to follow them and motivate them to practice their faith and, hopefully, to be of service to the broader community.

I have to say that being in the presence of an evolved spiritual leader whose mere presence gives one a feeling of unconditional love towards them is profound and, for me, results in immense joy and a lightness of spirit. These individuals, I’ve found, aren’t so much focused on the dogma but who you are…do you love, do you care, do you give? And they can intuit that in a microsecond.

How do you reconcile your “Do it now” attitude with mindfulness and visualization?

While clearly there are goals that one can accomplish NOW, most require a process to achieve with many smaller steps that must occur. Breaking down the larger goal into small steps makes accomplishing the goal seem much less arduous and more attainable. In some ways, your subconscious, once you’ve imparted the goal, does this for you.

One only grows by taking steps into the unknown and with the acceptance of uncertainty. Of course, choosing the unfamiliar can have negative consequences in terms of the reality of not having events work out the way one wishes. You notice I don’t use the word failure. Every path, including those that lead to a positive effect and those that result in a negative effect, can lead to wisdom. In fact, it is usually the negative events that, when later examined, are the ones that give us the greatest learning, insight, and wisdom.

You’re the child of an alcoholic father. Care to say anything about alcohol?

Be it alcohol, drugs, or sex, each can lead to one’s downfall. It is certainly not uncommon for individuals with backgrounds such as mine to have addictive personalities. Such addictions are attempts to assuage the pain and shame of our past. When one is able to understand that one is not their past and one is not their parents, then the pain lessens or dissipates, and the shame evaporates.

How important is pain to working toward success?

Well, being uncomfortable can motivate one to perform. I am assuming your question is in this vein. That being said, feeling overwhelmed and not seeing the possibility for success leads to stress, anxiety, and often depression.

How does “the alphabet of the heart” relate to your practice of neurosurgery?

It is useful in that it remains a practice that I begin with when I awaken, as I sit and breathe, focused on joy and awe, followed by the alphabet, which centers my intentions. Usually, one or more times a day, I will stop and focus on the alphabet or one of the letters and sit with it for a minute or so. It resets my intention. There is actually a podcast that discusses the neuroscience behind each letter on the website for Into the Magic Shop.

Will we become more compassionate in the future?

We will, or our species will not survive. As Darwin said, “It is the survival of the most sympathetic,” and many students [have shown] in a variety of mammalian species that long-term survival of a species requires cooperation.

About Love: Q&A With Margot Livesey

A Q&A about love with the author of six novels, including the recent A Flight of Gemma Hardy.