An Interview with James Hannaham

The author discusses his novel Delicious Foods, which just won the 2016 PEN/Faulkner Award for Fiction. 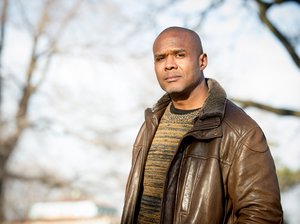 Delicious Foods is the story of Darlene, a woman who travels from sorority sister, wife, and mother to widow, addict, laborer, escapee, and, finally, to the beginnings of redemption. Eddie, Darlene’s son, brings to mind Carroll Sockwell, an artist who lived and worked in Washington, DC. As a young man, when his mother was committed to St. Elizabeth’s Hospital, Sockwell feigned a nervous breakdown in order to join her. In Delicious Foods, Eddie searches for his mother, and when he finally finds her on a labor-camp-like commercial farm, he moves right in.

The character Scotty (crack cocaine) was Darlene’s lover, best friend, and, of course, awful addiction. Scotty also has a wonderful sense of humor, a brilliant stroke. How did you develop Scotty’s personality?

​Ah, so you want me to reveal my trade secrets right off the bat, eh? I'm tempted to just say "Magic!" in response. There's no real trick to it. Crack is famous, so Scotty didn't require a lot of backstory; I actually removed some slightly indulgent riffs about its personal life from the manuscript. I just tried to keep the voice consistent with my feelings and research about what crack might be like as a real person: extremely charming, fun, and funny on the surface, but psychotic, narcissistic, and ultimately lethal once you get involved with it and it's too late to turn back. Like a really bad friend or lover who convinces you to get married.

I toyed around with the voice a little because I had questions about whether having Scotty use [African American Vernacular English] was the best choice; that fact certainly runs the risk of offending people. So I wrote for a little while based on the idea that maybe crack was a pretentious, upwardly mobile drug, but it didn't feel right and was not as enjoyable to write. That said, it was extremely important to me that Scotty's voice and the other narration display equal levels of insight and perception; I wanted to demonstrate that the use of AAVE — or really any vernacular language — is not a sign of lower intelligence or awareness. Which hopefully challenges anyone who believes otherwise.

Cruelty has such a long reach. One almost wishes it would go too far and implode, but it’s far too sinister and self-preserving. In Delicious Foods, cruelty is almost another character. Did you think of it this way?

​​There is a little bit of an operatic quality to the story that I was conscious of as I wrote, in that it is the story of a woman who goes through so much hardship that it may seem preposterous at times, even though with this story, there is a basis in fact. I'm not an opera fan at all, so it was just a vague sense of that kind of tragedy. The story is also more about power for me than cruelty — cruelty just being a byproduct of the possession of almost any type of power, it seems.

When Eddie goes on that angry rampage and kills a bunch of cockroaches, he's demonstrating his ability to abuse the very small amount of power he has in his world. That ability then catches the approving eye of the management. This dynamic repeats everywhere in our world, on a smaller or larger scale, and seems intractable almost — it's a huge problem, one that I don't think is necessarily part of human nature or the nature of power, but seems to flow out of some type of permission we think we get when we get a taste of power. Even those who know what it's like to be powerless and abused, like [farm manager] How, are susceptible to this kind of intoxicating will to abuse. That's truly horrifying.​

“People of all kinda brown colors was tossing around in them beds without no sheets, looking like a box of chocolates that had fell on the floor and got smashed and then put back into the smashed box.” This is a perfect description of the downtrodden crammed into a cement chicken coop. I also imagined them bitten, like when one tries and dislikes a chocolate and so returns it to the box. At the same time, these people are so resilient. How in the world is it possible? Drug-fueled or, really, drug-addled?

​How, indeed!​ I don't know, people are capable of withstanding all sorts of horrible situations. The way that we process our situation is also important. Rationalization, hope, humor, anger, belief, and just a kind of animal determination to survive all play a part. And then if you add drugs to the mix, perhaps delusion and fantasy also come into play. Or maybe they are in play whether drugs are around or not! I mean, that question is part of what inspires me to write in the first place.

“When he found Fatback, a self-assured, meticulously put-together lady who had more of a landscape than a body sitting on top of her legs…” We meet Fatback for only a moment, but the memory of her lives forever. Do you believe that this is true because your description makes us conjure our own picture?

​No, it's because I'm manipulating you into conjuring what you think is your own picture. How's that for a trade secret? But I think that's what any author is doing, intentionally or not. I've always been hyper-aware, maybe because of my subject position as a gay black man, of the fact that any piece of writing represents an argument of some kind about the world and how it supposedly works, and that it can persuade you​ to think in ways that you may not be aware of. I'm saying that because as a GBM and a critical thinker, I often find myself disagreeing with those arguments about the world that tend not to consider the existence of such people as myself. Which is different than representation, I think. And that's not to say that I always agree with the arguments of other GBMs, either!

​“And like anybody who had a second of clear thinking in the middle of a cyclone of bullshit, she lost her mother Fucking mind.” Clarity is short-lived and rather dependent on chaos, wouldn’t you say?

I think it depends on how susceptible one is to getting lost in chaos, for whatever reason, and how quickly and pragmatically one responds to irrational situations without making excuses for them. Clarity doesn't need to be short lived, either — once you recognize the reality of a given scenario, the understanding rarely disappears from your mind even if you remain in denial or refuse to deal with it.

“That’s why this whole legal-system thing people ​got going hate me, call me a controlled substance and keep me from making friends with everybody, ‘cause I know how to make time go away.” Scotty, for once, is playing up his skills rather than his so-called love for his friends. In many ways, Scotty is more developed than some of the other characters. We understand him better. It’s a funny metaphor, understanding the drug rather than the addict. You are so into the ​ ​joint head of an addict and his drug, you’ve created a two-headed human, an impossibility that works. What’s your secret? Experience or imagination or the combination?

​Are you asking me if I've done crack?​ I think our understanding of Scotty is based on our previous familiarity with crack, not on any character development on my part. I actually held back, as I said earlier, on giving Scotty too much of a life outside the story for that reason. The story is about Darlene, though you're right to suggest that I don't entirely understand her myself. She makes so many horrible, regrettable choices. But Scotty impairs her ability to judge so often that it does seem as if crack has more of the decision-making power, and crack is completely self-interested. Scotty does not give any fucks whatsoever about anything else in Darlene's life, so why should she? My secrets are research, imagination, and empathy. Not that those are really my real secrets. Like I would tell you those.

Did you give us Eddie’s story first to help us cope all the way through the narrative? Why ​ ​did you decide that it would be best for the reader to know his end before we knew his beginnings?

​I think it's because I was playing on the trope of the Magic Negro, that supporting character in certain films and stories whose background always implies some sort of Gothic trauma that usually remains unexplored or gets glossed over. I had decided that I would set Eddie up to be a bit of a character like that, were he in some other story, and to make him central to the narrative instead of a fascinating yet marginal sort of “spice.” The idea that it would ease the reader's mind wasn't really the point — as if there is anything else in the book that might ease the reader's mind! — so much as another fascination I have with narrative, which is the fact that you can actually tell readers what's going to happen in a story as a way of increasing their desire to keep reading.

To paraphrase Margaret Atwood, we want to know "how and why," not simply see "a what and a what and a what." We don't read just to get the facts by themselves, this suggests to me; we read to find out about the sequence of events in a story, the reasons things happen, and to take pleasure in words and language and the voices they create.

[Editor’s note: James Hannaham will accept his PEN/Faulkner award — and read from Delicious Foods — during the organization’s annual awards ceremony on Sat., May 14th, at the Folger Shakespeare Library in Washington, DC. Click here for more information or to purchase tickets.]

In this special Valentine’s Day interview, Mandy Huckins talks with Meghan Laslocky, author of The Little Book of Heartbreak.