An Interview with Elizabeth Bruce

The novelist talks Texas, King Midas, and the appeal of quiet characters. 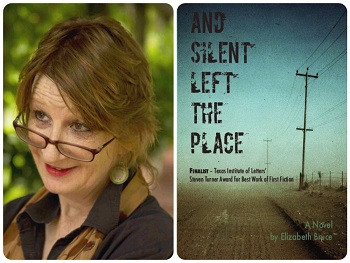 A longtime writer, actor, and playwright in the DC area, Elizabeth Bruce is also author of the novel And Silent Left the Place, which won the Washington Writers’ Publishing House’s Fiction Award and ForeWord Magazine’s Bronze Fiction Prize. Although originally published in 2007, the book was rereleased by WWPH in October 2021.

Your book has an intriguing title. What’s its origin, and what does it mean to you?

The title, And Silent Left the Place, is from a line in Ovid’s Metamorphoses about King Midas’ barber. After being relieved of his Golden Touch, King Midas was given the ears of an ass by the god Apollo for deigning to think that Pan’s music was superior to Apollo’s. Humiliated, King Midas covered his ears with a turban, and no one knew his terrible secret except his barber, who was sworn to secrecy. But the barber couldn’t contain the secret, so he:

Then dug a hole, and told it to the ground;
In a low whisper he revealed the case,
And covered in the earth, and silent left the place.

My protagonist, Thomas Riley, is an 81-year-old World War I vet who came back from the Great War middle-aged and silent. He can speak but he doesn’t speak. Like King Midas’ barber, Riley bears the burden of secrets, and, in fact, he digs himself an underground room where he shares his anguish with his beloved but long-absent wife, Dolores.

For me, the origin of a story or novel is always an idea or character that captures my imagination. What got you started on writing your book?

Like many first novelists, the origin story of Silent involves a first draft abandoned in despair — an ever-expanding coming-of-age story set in my native Texas in the late 1960s. I started over and imposed an extremely spare, oral style on myself. The book was written completely out loud, with a Texas cadence and a nod toward the tall Texas tale. I focused instead on Thomas Riley, a marginal character in draft one. Riley was as unlike me as I could muster, though he was very loosely based on my maternal grandfather, a World War I vet who was wounded and lost an eye and came back a very, very quiet man. He wasn’t a Texan, like my East Texas daddy; he was a house painter from Wisconsin, but I saw in him the same cryptic stoicism as Riley and “the parched flatness of South Texas, where a man’s worth can be measured by the stillness of his shadow at sunset, and the liveliness of it at dawn.”

Your central character is Tom Riley, but most of the action is about others. Riley is more of an observer than an actor. Do you see it that way?

So true. From his old gas station in the desert above Laredo, Riley perceives others’ sorrows and humiliations. As the novel says, “Riley saw everything folks tried to hide — all their wounds and unlovedness. Passions and vaguer urges.” Indeed, as the folkloric voice of the novel says about silent people, “Folks want to give their words to them, weigh them down, keep them from floating off to whatever place it is that quiet people go to.” Riley is a touchstone for other characters who encounter him by accident or design during the 24 hours of the novel’s story. Events happen around Riley, and he is drawn into a cascade of bizarre events that eventually reveal why he doesn’t speak. And all the while, Riley’s silence holds secrets that touch everyone in the story. He is pivotal to the action and moral implications of the novel.

What is the moral of the novel?

Well, readers will take from Silent what they will. Like other writers, I surrender to their interpretations. But for me, the book’s moral core is more mythic, more metaphorical, more symbolic. It is more of lore than practical reality, which makes it a very unmodern book. Riley’s fidelity to his silence is both atonement and damnation for sins larger than himself. And redemption only comes after a long penance for the sins of the fathers and the fathers’ fathers visited upon the children, to paraphrase Euripides.

And Silent Left the Place was first published in 2007. If you were writing it today, how would you change it?

I’m not sure I would change it, beyond fixing a few technical errors and cleaning up some of the language. Silent is, as we’ve discussed, a tale of earlier, harsher times, of barren realities imposed or endured by crueler or more stoic folks, among some of whom the burden of silence passes from old to young. I may risk alienating some contemporary readers with the absence of modern interventions in the narrative arcs of Riley and others. There is no therapy, no drug regimen, no support groups for the traumatized old soldier Tom Riley. No one intervenes to reunite this lonely old man with his beloved wife, Dolores, wherever she is. There are no trials bringing justice to the aggrieved. Instead, the unforgiving desert of South Texas in 1963 and the squalid trench warfare of the Great War a hundred years ago are what they were, and I tried to bear witness to Riley’s truth, heartbreaking though it was.

My current projects include finding a small-press home for my collection, Universally Adored and Other One Dollar Stories, in which each short fiction begins with the words “one dollar” and pivots in some way around the “universally adored” American dollar. A second project links characters from different dollar stories. My third project is a dual-voiced novel about the friendship of two young women on the Gulf Coast in 1972, which I’m co-writing with my friend, former Georgia Author of the Year Debra Bowling.

Frequent contributor Tom Glenn is a fulltime author with six novels and 17 short stories in print. Much of his fiction is about Vietnam, where he spent the better part of 13 years supporting friendly forces on the battlefield with signals intelligence before escaping under fire when Saigon fell.