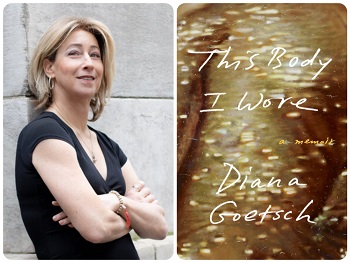 Diana Goetsch is the widely published author of eight poetry collections, including Nameless Boy and In America. She taught for 21 years in New York City public schools and was the Grace Paley Teaching Fellow at the New School. Diana wrote the “Life in Transition” blog for the American Scholar in 2015 and 2016, and in her new memoir, This Body I Wore, she shares her journey transitioning to female.

You’re primarily a poet. Why turn to a prose memoir now? What can you accomplish in prose that you couldn’t in poetry?

I think the memoir was just the next thing I needed to write. I’m generally bored with myself, but when I transitioned, I looked back at things that shocked even me and that others might be interested in — such as the crossdressing subculture in New York City in the late 1980s, where so many people were trans and didn’t know it, or what it was like to be a closeted trans kid when there wasn’t any language for it. When there’s no language for something, there’s no conceiving of it, so you sort of don’t exist. You’d need a literary narrative to say these unsayable things — not to argue or persuade, but to put a reader in your skin for a while. Much later, there were waves of grief for that living death which touches into the living deaths of millions of trans people throughout history. Perhaps there are younger trans people interested in history and some of the people, events, and circumstances that opened up this space of visibility that they’ve stepped into so much more easily and beautifully than we ever dreamed.

You include a note at the beginning of This Body I Wore regarding language, pointing out that you will be using “terminology authentic to the era of each experience.” In mainstream culture, much of trans awareness focuses on language and the political right’s condemnation of “woke” terminology. How important is terminology/language in any given era?

Perception follows language. I didn’t always believe that, but now I do. If there are no words for a thing or person or phenomenon, there is no perceiving it. If there are words, and someone purposely uses the wrong ones, that is gaslighting. Every bad thing that could possibly happen to a trans person begins with misgendering. Call a man a woman, or a woman a man, and we’re on our way to erasure or bullying or murder. As for “woke,” that word used to mean “respectful of others.” Current Republicans, who are fascists, have urinated all over that word.

One of the interesting things about This Body I Wore is its time structure. Each chapter is carefully dated by year, but you don’t arrange them chronologically — going back to childhood for the middle of the book, for example. What does that fractured structure give you that chronology did not?

Another kind of fracture is that each chapter opens in the present tense, which air-drops us into a completely new setting, like the book is starting over again. I wanted to suggest the chaotic, improvised sense there is to a closeted trans life. You feel like you’re always at square one, you don’t get why, you’re waiting for your life to begin, and meanwhile, you’re getting older.

The memoir covers 1968 to 2019, a period of tremendous political turmoil, particularly related to gender, sexuality, and gender identity, yet you largely avoid direct discussions of politics here. Why?

Gender is so personal. Some parrot the slogan “the personal is political” as if nothing can be personal, and the word has no right to exist. We also hear “gender is a social construct.” Wrong again. Gender roles are certainly political, and gender expression is probably a bio-psycho-social cocktail, but gender identity, which is at the heart of this book, is as deeply sensed and as costly to resist as gravity. Manifesting that sense, especially for late transitioners, can have a lot to do with how society is arranged and whether you can afford to see yourself as trans — just as many abused children are in arrangements where they can’t yet afford to see themselves as abused. That’s more political, and I feel like I do talk about those arrangements and how they affected me.

In This Body I Wore, you have no trouble calling out the hatred and small-mindedness behind transphobia, yet you treat your friend William Zinsser’s inability to see trans people with great compassion and understanding. Why are both those attitudes — to call out transphobia and to understand it — important to you?

Bill and I had something I’d never had with anyone in my immediate family: a huge reservoir of goodwill, trust, and love. When a relationship gets tested, there needs to be that reservoir available, like the oil reserves the U.S. has down near New Orleans in case of an oil shortage. With strangers, or with friends I had less investment in, if they’re transphobic, there’s no need to invest further, and there is rather a need to protect against such people. Bill was also going blind and would die soon. He would have been too overwhelmed to understand my transition. God, I miss him.

There is a good deal of justifiable anger and regret in your memoir but an equal amount of hope and humor. How do you balance all that?

I’m glad there’s hope. I was concerned there wouldn’t be. I say on the very last page that I don’t have a single trans friend who doesn’t wonder on a daily basis if their life will be viable. That’s pretty heavy. I haven’t mastered balance, but I do have a theory of balance involving three legs of a stool: protecting, self-care, and joy. When you’re under siege, as trans people are, you’ll need to be on one of those legs, and not the other two, on any given day. Do I need to fight to protect something or someone? Do I need to lay low and heal? Or do I need to celebrate and feel joy, which is what we’re fighting and healing and living for? Sometimes, all you can do is figure it out day by day: Which leg do I stand on?