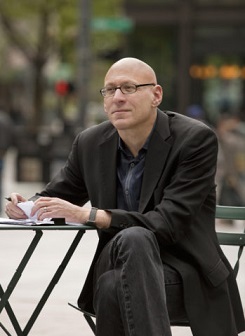 Back in October, a story appeared in the Hollywood Reporter revealing that Barack and Michelle Obama, under their production deal with Netflix, had optioned author Michael Lewis' The Fifth Risk to develop as a potential series.

Lewis' book, which chronicles the absolute mess made in the transition to the Trump Administration, was an obvious choice for the couple, whose goal in partnering with Netflix is, in part, to "cultivate and curate the talented, inspiring, creative voices who are able to promote greater empathy and understanding between peoples, and help them share their stories with the entire world," as President Obama put it at the time.

That's nice and all, but I'd much rather they optioned David Shields' latest book, the deftly skewering Nobody Hates Trump More Than Trump: An Intervention. At once a psychological investigation and a primer on bullies, Shields' work is ultimately a cris de coeur to the collective "us" — we who have created a place at the table for someone like Trump.

It's hard not to come away feeling that, instead of analyzing Trump, Shields has tossed the whole sorry lot of us on the metaphorical couch.

Your book is a mesmerizing study of power — how it isolates, how it infantilizes, how it amplifies our collective fears. Trump seems like a pretty good vessel for you as an author. But how could you bear spending so much time thinking so deeply about him?

Something is wrong with Trump, but something is also wrong with me, because I found it oddly energizing to spend a year and a half thinking about Trump. (In a way, that's what the book is about — the curiously addictive nature of this moment.) It was a way to avoid boring everyone I know with my psychological and cultural theories and to turn my anxiety/mania into something “productive.” It also struck me as a citizen-like duty to contribute what I could — to try to wrestle with the how and why of Trump in a way no one else was quite doing. It's dance criticism. It's theater criticism.

What served as your palate-cleanser when you needed a break?

Simon Gray’s four-volume The Smoking Diaries, which I reread over and over as a model of self-obsession turned into magisterial art.

Trump is clearly a narcissist. I've always wondered: Is it possible to insult or instruct a narcissist?

It’s the 64-trillion-dollar question. George Lakoff’s point: Don’t think of elephant (we think of elephant). Does a book like this just build Trump’s brand? He has swallowed America whole and, as such, he gets our bottomless narcissism. He gets that we want to be amused to death. Accused of being superficial, he says it’s the key to his success. In a shame culture, being shameless gives one power, as Louis Theroux has said. The only rejection of a narcissist is to reject his frame and to talk about, say, "Medicare for all," but Trump knows we're as superficial as he is. Or enough of us are that he can get away with it. If we weren't such a carnivalesque culture, none of Trump's Trumpetry would work.

Why did you decide to train your eye on Trump?

I’m interested in what’s interesting, as Jean Rhys said. I’m interested, as she was, in the self-destructiveness of the human animal. Trump has been building for this moment his entire life — his unraveling. I wanted to explain why he wants to finally feel something authentic (he’s a dead man walking and has been since childhood). America loves that about him, because most of us are numb, as well (American life has become unlivable in any real sense), and we elected — in my view — Trump in order to watch the mask come off. It's coming off...tomorrow...or the next day...or the day after that.

I think this book does the job of what commentators like Stephen Colbert or John Oliver do, but does it so differently. Was it hard for you not to slip into a late-night routine or take some easy potshots at Trump?

Thanks. That's a lovely point. The book is opposed to Colbert and John Oliver, neither of whom I find even slightly interesting. Both stand on an easy moral promontory and peer down from a great height of self-congratulatory rectitude. My book proceeds from G.K. Chesterton, who, when asked what's wrong with the world, pointed to himself and said, "I am." If we're to understand Trump, we need to understand ourselves, American culture, and human nature. Trump is symptom, not cause.

I noticed that you thanked your research assistants in the acknowledgments. We've talked before about how you organize and structure works like this (I'm also thinking Reality Hunger here). What marching orders did you give your assistants and how did you shuffle through so much collected material and find a logical order? Can you give us a sense of your process?

In June 2017, I decided I wanted to write the book, so I sort of “buckled myself in”: watched CNN, Fox, MSNBC around the clock; listened to Rush Limbaugh and NPR; read every book about and “by” Trump; watched every “Apprentice” episode; listened to every [Howard] Stern-Trump exchange. Research assistants mainly checked [citations] for me. My method for all my books: Be confused about something, gather a massive amount of material about it, throw away most of it, keep the parts that make me uncomfortable and/or surprise me, organize the material horizontally or vertically (e.g., AAA/BBB/CCC, or abcabcabcabc), restring the book for maximum momentum within each chapter and chapter to chapter, slap front and back covers on it.

It’s hard for me to categorize what you find interesting and worthy of your attention as a citizen and a writer. What requirements must a subject have before you’ll consider committing it to the page?

Can you talk about your recent documentary and how it fits into the Shields-ian oeuvre?

My documentary film, “Lynch: A History,” is about iconoclastic NFL star Marshawn Lynch’s use of silence, echo, and mimicry as key tools of resistance. As such, it's an ode to Lynch's attempt to be true to himself in a capitalist, racist society that wants to exploit him and that he wants to both exploit and oppose. It's also my nth attempt to demonstrate the poetic possibilities of the essay form — here, it's the cine-essay — and also to apply my collage method of composition to film. “Lynch: A History,” which is executive-produced by Danny Glover and represented by C.A.A., is being released next year.

I have to ask: Will Trump get a second term? Is it our fault if he does?

Cathy Alter is author, most recently, of CRUSH - Writers Reflect on Love, Longing, and the Lasting Power of Their First Celebrity Crush, and a member of the Independent’s board of directors.