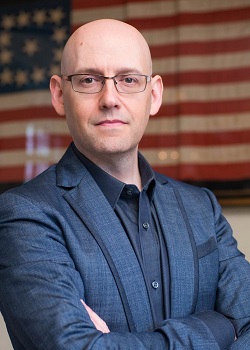 Many of us stumble across a fun factoid or interesting personality that we end up sharing at a cocktail party or the office watercooler. Not Brad Meltzer. With the unerring ear of a good storyteller, Meltzer builds a book around those discoveries.

The New York Times bestselling author of The Inner Circle and The Book of Fate, Meltzer has written books in other genres, too, including nonfiction, advice, children’s, and even comics. He’s also the host of “Lost History” on H2 and “Brad Meltzer’s Decoded” on the History Channel.

His latest novel, The Escape Artist, introduces a new protagonist, Nola Brown. Based on a real person, Brown is the U.S. Army’s artist-in-residence, drawing or painting actual military missions. I spoke with Meltzer last week.

You’ve continued to produce bestsellers for the past 20 years, yet you’ve done a reassessment of your work and changed direction this time around. Why?

Some of [my] more recent books got a little plot-heavy. The older ones were a little more character-driven, and I just said, “I want to get back to that.” And, so, I refused to start this book until I had Nola and Zig as fully formed characters. I was like, I don't care what the plot is, I just want these characters to sing. And it took me...it basically added a year to the process, but I said I don't care.

You obviously do a lot of research, and I think it gives the work more gravitas and authenticity.

That's the thing. I think in this world, with all the Library of Alexandria in our pockets with our phones, the hardest thing to find today is the truth. Go put the word “Freemason” into Google [and] watch how many pages you have to wade through before you find something that's actually practical.

You [read The Escape Artist] and you know that detail is right. You know it. I'm writing fiction, I can lie and say whatever I want, but you know which details are true. And I just feel like…there's a responsibility to make sure I try and get that right, even though I know it's all fiction. Fiction is this giant lie that is trying to masquerade as the truth, and the more facts I can put in there, the more I can have you believe my lie.

How did you come up with Nola?

We were filming our TV show “Lost History” and we were trying to find the 9/11 flag that the firefighters raised at Ground Zero. And we actually found [it]. The producers wanted [to film] some kind of military background…so they had me at this military base. God bless the producer who picked this location, a military base out in Virginia, Fort Belvoir, which you see in the book.

And I'm walking around...they are giving me a tour and they're showing me paintings that were done by Adolf Hitler, and there's all this artwork done by these big Army people. And I'm like, “Why does the U.S. government have all this art?” And they [said I needed to] meet their artist-in-residence.

And I was like, what's that? And they explained to me that, since World War I, the U.S. Army has had an actual painter on staff who is painting disasters. So, while everyone else is running into disasters with guns…whether it's the beaches of Normandy, or Vietnam, or 9/11, the war artist runs in not with guns, but with just paintbrushes in their pockets. And I was like, that's the craziest person I've ever heard of; I want to meet him. And my bias got the best of me. They said, you want to meet her. And I was like, yes, I want to meet her. And even before I met her, I knew in that moment [I had] my character; this is her.

I don't mean this in a smart-alecky way, but it sounds like you're especially happy with how this book turned out.

Yes, I mean, listen, let's be very clear... no author will say no to that. But…I will never tell you that this one is a little crappier than the other ones. But I will absolutely tell you I'm as proud of this book as anything I've written in over a decade…because I felt I got back to the basics of it. I had to go through my “Rocky II” montage and go back to the basics.

I can hear it in your voice that this work, and I'm not saying anything negative about your previous work, but...

Yeah, and no, and I love my previous…I love the previous characters.

I've been at this 20 years, right? In the beginning, I wasn't honest in an interview. I would just say everything is great, everything is the best, I'm just happy to be here. I'd give every baseball quote in the world and, eventually, somewhere along the way, I was like, you know what, be honest. It's much more interesting, right? I mean, who cares? And the truth is that I was trying to deal with my own life. I was trying to figure out my place in it.

And I'm not smart enough where I know that theme [in a book] when I start. No, I'm a moron. But I'm good at finding the theme when I'm done. And when I'm done, I always can find it in my own life. Always. Every book. What am I worried about here? Oh, I'm like, that book was about me and my dead parents. Holy cow, how did I not even see that? It's why the books save me from therapy.

An Interview with John Copenhaver

The debut novelist talks homophobia, layered narratives, and the tricks of the photographer’s trade.