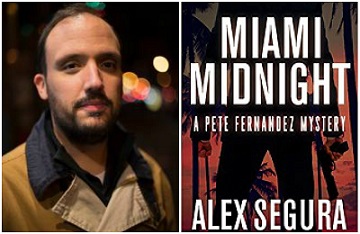 There’s a reason that seemingly everyone in the crime fiction community knows Alex Segura. You won’t find a writer involved in more projects. Not only is he the co-president of Archie Comics, but he also wrote a podcast in 2019 that the New York Times called “one of the best podcasts of the year” (Lethal Lit); pens a beloved series (the Pete Fernandez mysteries); writes a popular must-read newsletter (Stuff & Nonsense); and is supportive of fellow authors and an advocate for marginalized writers (a founding member of Crime Writers of Color).

I’ve talked with several writers, and none of us has any idea how Segura gets it all done, but we’re glad he does. It’s not hyperbole to say that crime fiction is better because of Alex Segura, both through his support and his writing.

The Pete Fernandez books have been praised by everyone from Alafair Burke to Laura Lippman to Megan Abbott, and for good reason. With Fernandez, Alex subverted the trope of the damaged P.I. by exploring it deeper than most of his contemporaries or classic mysteries delved.

The alcoholism Fernandez deals with is treated seriously, without romanticism. The female characters are more than mere tropes or sidekicks. The fifth book in the series, Miami Midnight, is the last, and I talked with Segura about the book, concluding the series, and how he makes his characters so real.

You're known as a Miami writer, but you live in New York. Is Miami constantly going to factor into your work, or is the end of the Fernandez books also a goodbye to the city?

Miami is where I'm from, and it's a big part of my life — my parents, many close friends, and colleagues live there. We try to go there a few times a year, too. So, while I'm not living there now, it's still ever-present, personally and professionally.

In terms of my fiction, I think there will always be an element of Miami. When I first started the Pete books, I knew I wasn't "ready" to write a New York crime novel — and that worked out fine because I got to carve out a space for myself as a Miami crime writer. I'm more confident now that I can write a book set anywhere, but that doesn't mean Miami will go away. In fact, while my next book isn't set solely in Miami, it does reflect back on the city.

When I started the Pete books, the idea was to write a book that not only told a fun, compelling mystery, but also showcased the Miami I knew and was familiar with, not the idealized version people saw on TV or other places. So that's always going to be part of my writing DNA.

Miami Midnight is infused with jazz, and you've spearheaded and written crossover efforts with Archie Comics and popular bands. What brought on your interest in music, and why does it factor into so much of your work?

Music was always around growing up in Miami, whether it was Cuban music, like Celia Cruz, or something else, and there was very little snobbery. One minute you're listening to Gloria Estefan or Madonna, the next, it's the Beatles, Dylan, or the Stones. I'm grateful for that, because it means I'm less of a music snob. A good song is a good song.

Music is one of the great joys in life. I've been in bands and can play guitar and I'm trying to learn the piano. It's a different language, much more primal and emotional. The right mix of chords can say as much as an epic poem. A lot of the Pete books feature nods to whatever Pete is listening to at the moment — from Neil Young to Neko Case to the Replacements to Taylor Swift. With Miami Midnight, I wanted to have a strong musical element, but not just default to the murdered-rock-star idea.

I love jazz and I think it's a whole different musical frequency, and there's a long history of tragic jazz figures. Jazz and noir blend together really well, so with that idea, I set off on Miami Midnight, and I'm really happy with the result.

I think music is part of so much of my work because my default setting is to write about the things I'm passionate about at any given moment, whether it's cults, organized crime, jazz music, comics, or what-have-you.

Those are the elements that make the best crime novels; if you're writing from a place of obsession, passion, and curiosity, as opposed to a more academic perspective.

One of the things I love most about the Pete Fernandez books is his relationship with Kathy, and I've talked with female readers who enjoy her character, as well. How do you ensure, particularly in a day when #ownvoices and authenticity are such prevalent concerns, that her character is authentic?

I'm so glad you said that, Ed, because Kathy is such an important part of the series — almost as important as Pete, in many ways, and it's really wonderful to hear that readers relate to her.

Authenticity is important, for sure, and I really wanted Kathy to be much more than what you're first led to believe. In Silent City, you meet her as the victim, as the missing girl Pete has to find, but she's much more by the end. You could make a strong argument that Kathy's a more competent investigator than Pete, because she's much more focused on information and facts, whereas Pete is much more instinctual. In that way, they balance each other out.

I didn't want the relationship to be romantic out of the gate, though, even though I knew that's where it would go. I wanted it to feel natural and full of the landmines and detours we experience in real life. In terms of making Kathy authentic, I just took my cues from real people — she's an amalgamation of people I know really well, plus a few things I wanted to add to the character.

I didn't want a sidekick, and I didn't want a passive person that just reacted to Pete. They're partners, she's independent and smart, and never the victim. Even when she's injured or facing tragedy, I want the reader to feel like she's a fully developed character, and you only get that by trying to get close to reality.

I also make a point of having a solid core of beta readers that can call me on my bullshit if it happens, not just in terms of Kathy, but everything I do. I want the Pete books to feel like they're happening in the real world and reflect the diverse people and things that populate it, and that means making sure I'm doing that correctly, which is where good, diverse, and honest beta readers come in.

So much weighs on Pete and, at times, seems overwhelming. Given how attached you must be to his character, and how realistically he's drawn, did his wavering mental and emotional health ever wear on you? And, if so, how did you separate yourself?

Oh, sure. There's always one or two scenes in each book where I have to get up and walk away. In the second Pete novel, Down the Darkest Street, he relapses, and it's brutal. It was so hard to write, because you spend the first part of that book rooting for him as he gets his life in order, but I knew once he started to stray from his program, he'd relapse. And once I realized that relapse fit the narrative of that book, I had to write it. That was a real fork in the road. He'd stop being a real character if I felt bad and kept him on track, and I think the books would have suffered for it. So, the challenge becomes how much more anguish can I put him through?

And that's been a big factor in deciding to end the series — because, at a certain point, you really test plausibility. There's only so many times you can drag a person through hell. As I started Miami Midnight, I knew it was, if not the end, then an ending for Pete. I don't want to spoil it, but by the end of the book, you realize that this is what we've been building toward since Silent City, whether I knew it or not. The story ends, and while there might be more later, those stories will be very different.

So, yes, Pete's troubles did wear on me, because — like Kathy and others — I wanted to present him realistically, and that meant being transparent not just about his drinking, but the recovery. Each book is a big-picture mystery, but it's also a personal look at one man's struggles to not just stay sober, but live a functional life, and that's tough, man.

Pete is not linear in his program or, really, anything. For every step forward, he takes two back, and that will continue until he figures it out for himself, which is very much what Miami Midnight is about. There are moments of levity, but the books are dark. Pete and his friends do get glimmers of hope, and that's what balances the whole series out.

I usually try to brace myself before writing a particularly heart-wrenching moment, because otherwise I get dragged down along with the story. And once I'm done, I give myself a day or two to recover.

In Blackout, there's a flashback where Pete discovers the remains of his high-school crush buried in her father's front yard. It's terrible. Dark. Really unforgiving. I think I had to put the book down for a week after that, just for my own sanity. But I also think those scenes are what make the series. They don't pull their punches, and I feel a responsibility to the readers and Pete to present these things as realistically as possible.

Can you really say goodbye to Pete?

No, there's no real goodbye. Pete's like family. I imagine if an idea pops into my head, I'll come back and have something else to say — but the world and characters will be very different. Looking down the road, I'm intrigued by that. In the short term, Erica Wright and I are pecking away at a novella featuring Pete and her P.I. character, Kat Stone, that's set before Blackout. So, there's at least one more Pete adventure, even if it's not set in the present.

I'm working on two new comic book things that I can't say much about yet, maybe three, and writing a new standalone that features a new protagonist. That's all I want to say because it's such early days that I don't want to paint myself too much into a corner. But I'm really excited to explore where this book is going.

Ashleigh Andrews Rich interviews the author of We Sinners, a moving story of a family of 11 in the American Midwest, bound together and torn apart by their faith.