A Year of Better Failing 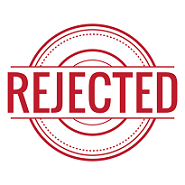 The phrase “Fail better” appears five times in Samuel Beckett’s 1983 story “Worstward Ho,” the first of which goes like this: “Ever tried. Ever failed. No matter. Try again. Fail again. Fail better.” I came across this phrase not through Beckett (the truth: I have failed to read his work) but through an essay by Kim Liao that appeared on Literary Hub, "Why You Should Aim for 100 Rejections a Year."

In an effort to fail better (and perhaps wallpaper her dining room in the process), Liao decided to collect rejection letters — from magazines, residencies, grants, fellowships, and, while she's at it, literary agents. Liao figured if she worked that hard to get that many thanks-but-no-thanks, there were bound to be a few thumbs-ups in the mix. By the end of 2020, she succeeded in failing 43 times, enough form letters to perhaps spruce up her front hall closet.

I'm not sure I'm up for 100 rejections. Just one "We've decided to pass" is enough to put me in the fetal position. I'd much rather pace and target my rejections. Liao's strategy is too willy-nilly in design. In fact, when I set out to pitch an article or sell an essay, I like to tell myself that I'm applying to college. There are the Ivy League schools, the schools that won't laugh at my SAT scores, and my tried-and-true fallbacks.

For example, when I taught a course called Magazine Substance and Style to graduate students, I had everyone in class, myself included, make lists of outlets and then concentrate on the middle column, the "challenge" schools. My challenge school was O, the Oprah Magazine, and I did not quit until I got in. (As you can imagine, a rejection from an Oprah editor is so lovely, I had to read my initial one three times before I figured out it was, indeed, a rejection.)

Steeling yourself for rejection is hard no matter how easy the letdown. What's worse, I think, is the radio silence of no response at all. That no matter a beautiful turn of phrase, a killer kicker, or a timely, well-formed opinion, an editor didn't see fit to lift a finger and hit reply. Yes, yes, we're all busy and buried under piles of manuscripts, but a writer's purgatory is its own brand of torture. Please remember to hit reply and put us out of our misery.

We're only days into the New Year, and I do have a book proposal polished and ready to shop. I hear agents just love to say no. And, if you must know, I've already received my first negative response. Luckily, it was from an at-home covid test.

One Way or Another

How I keep writing through the pandemic.