Following another summer of Supreme Court rulings, John Christie takes a look at recent reads on the storied Court and its justices. 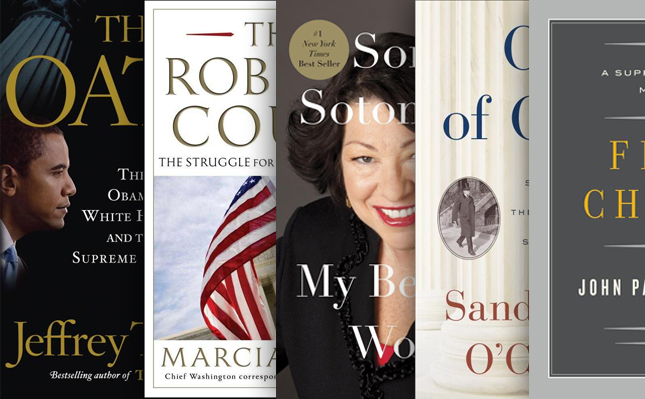 The Supreme Court once again was front and center in the public mind during June when it announced the “blockbuster” decisions on affirmative action, voting rights and same-sex marriage for which the term will be best known. It was no different last year when the decisions on the Affordable Health Care Act and the Arizona immigration laws were issued in June.

As a result, every summer the public focuses a great deal on the Court and its current personalities, which may stimulate an interest in reading books by and about the justices and their work. There is in fact much to choose from.

An excellent start is Linda Greenhouse’s The U.S. Supreme Court: A Very Short Introduction. As the author suggests, her aim is to “enable readers to understand how the Supreme Court operates.” Ms. Greenhouse is eminently well qualified to speak to the subject, having covered the Court for The New York Times from 1978 to 2008. Today she teaches at Yale Law School and writes occasional pieces on the Court for the Times. For those interested in how cases come to be heard by the Court, the process leading to a decision and the Court’s relationship with the other branches of the federal government and the public, this is an excellent way to begin.

In 2009, C-SPAN was given a historic opportunity to film interviews with all of the then-sitting justices (except Justice Souter, who declined to be interviewed) and one retired justice, Sandra Day O’Connor. These interviews included all of the present-day justices except for Justice Kagan, who joined the Court after the filming was complete. The interviews were later published as a book, The Supreme Court: A C-SPAN Book Featuring the Justices in Their Own Words. On subjects ranging from how they prepare for oral argument to the artwork that hangs in their chambers, this book offers a rare, personal profile of eight of the current justices.

Jeff Toobin, well known to the public at large as legal analyst for CNN, has written an engaging book on the current Court and many of its seminal opinions in The Oath (and before that in The Nine – equally readable but now a bit out of date). He has also been featured in The New Yorker in a series focused on several of the current justices, the latest being a piece on Justice Ginsburg in the March 11, 2013, issue (“Heavyweight: How Ruth Bader Ginsburg Has Moved the Supreme Court”). Laced with just enough tidbits of colorful gossip and detail to keep the lay reader interested, The Oath speaks knowledgably of the background of each of the current justices and the story of many of the Court’s most noteworthy recent opinions.

Similarly well known to the general public as the Supreme Court commentator on the PBS News Hour is Marcia Coyle. Her new book is The Roberts Court: The Struggle for the Constitution. As News Hour aficionados know, Ms. Coyle possesses a wonderful ability to spin out interesting stories about the cases that come to the Court and make complicated Court decisions understandable. Her talent in both respects comes across in this book as well. Here she focuses on four of the major decisions that the Court has issued under Chief Justice John Roberts: the Second Amendment gun control case, two companion affirmative action cases involving public schools, the campaign finance case (Citizens United) and the Affordable Health Care Act decision.

In recent years several of the justices themselves have become authors. Some of their books are closely focused on their role as justices. The choices here are easy: Justice Scalia’s A Matter of Interpretation: Federal Courts and the Law and Justice Breyer’s Active Liberty: Interpreting Our Democratic Constitution. In these two books, the justices stand aside from the task of decision-making in specific cases and talk about their own theories as to how the Constitution should be read. Because these two justices typically land on different sides of the Court’s 5-4 decisions, the reader will surely gain a better understanding of the thought process behind such decisions.

Other current justices have written autobiographies and in this category I have two recommendations. The first and most recent is Justice Sotomayor’s My Beloved World, a book that rapidly made her a rock star in the book world. In this remarkable book she talks quite candidly about the circumstances in which she grew up and her life and work before arriving at the Court. The second, published in 2007, is by Justice Thomas, My Grandfather’s Son: A Memoir. He also tells in a compelling fashion of his early life as well as his educational and work experiences, complete with a lengthy discussion of his infamous confirmation hearing. Each of these autobiographies is an interesting independent read but reading them back-to-back leads the reader to some inevitable comparisons, especially given that these two justices came from humble beginnings and attended Yale Law School.

Retired justices have also surfaced in the recent book world. Appointed by President Ford, John Paul Stevens served on the Court for over 34 years, the third-longest-serving justice in American history. His delightful memoir, Five Chiefs, talks about the five chief justices he knew either as a law clerk, practicing lawyer, appellate judge or colleague on the Court. But along the way, from an insider’s perspective, he provides us with an informative and, at times, humorous commentary on the Court, the Court’s impressive building and several of its more significant personalities.

Retired Justice Sandra Day O’Connor’s latest contribution to the book world is Out of Order: Stories from the History of the Supreme Court. Widely known and admired as the first woman to serve on the Court, Justice O’Connor became a considerable force on the Court during her nearly 25 years of service. Although her new book has been broadly panned by many reviewers, including the Independent, if you’re seeking a quick and easy read about the history of the Court and many of its justices, you may find this just what you’re looking for.

John Christie is a retired Washington, D.C., lawyer who, in some of his newfound spare time, teaches a course on the Supreme Court at the Academy of Lifelong Learning, a continuing education adjunct of Washington College in Chestertown, Md.

5 Ways to Help Your Book Market Itself

How to promote your book without quitting your day job