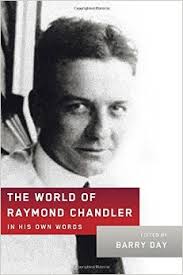 I just finished a marvelous book: The World of Raymond Chandler (In His Own Words), edited by Barry Day.

As a thriller writer myself, I didn’t think I had so much in common with Chandler, the acknowledged master of the genre.

What? You expected me to say that we are literary equals? There aren’t enough martinis in the known universe to make me say something like that. (By the way, is there an unknown universe? How would anyone know that?)

Chandler never wrote a memoir or autobiography, so the surest insight into his mind (at least his literary mind) is through his novels, short stories, letters, and the many interviews he gave after he became famous. Day’s book is loaded with excerpts from all those sources, as well as fascinating photos of Chandler and his contemporaries.

I’m ashamed to admit that most of my previous exposure to Chandler is through the movies made from his novels, including The Big Sleep, Farewell, My Lovely, and The Long Goodbye. But as I’ve just learned from Day’s book, there was a lot more to Chandler than Bogie and Bacall.

American-born but classically educated in England, Chandler spent time in France and Germany and learned the languages of both countries. He returned to the United States but, when World War I broke out, joined the Canadian Army and fought on the Western Front, surviving battles that basically annihilated his unit. After the war, he tried his hand at business in America, but didn’t like it and discovered he could eke out a living writing for pulp mystery magazines. His talent was soon apparent, and he won a book contract.

Moving to Los Angeles, Chandler essentially reinvented the private-eye novel, Philip Marlowe being his greatest creation. He also helped to reinvent Los Angeles, at least the noirish, corrupt town that most of us imagine the “City of Angels” was in the 1950s.

Chandler is justly famous for his descriptions and similes, many of which are so good they made me want to go out and get his books. (I just did pick up The Big Sleep.) The World of Raymond Chandler has many of his best lines, but there are Internet sites devoted to “Chandlerisms.”

Here is a sampling:

"I never saw any of them again - except the cops. No way has yet been invented to say goodbye to them."

"There was a desert wind blowing that night. It was one of those hot dry Santa Ana's that come down through the mountain passes and curl your hair and make your nerves jump and your skin itch. On nights like that every booze party ends in a fight. Meek little wives feel the edge of the carving knife and study their husbands' necks."

"I'm an occasional drinker, the kind of guy who goes out for a beer and wakes up in Singapore with a full beard."

"Even on Central Avenue, not the quietest dressed street in the world, he looked about as inconspicuous as a tarantula on a slice of angel food cake."

"If you don't leave, I'll get somebody who will."

"It was a blonde. A blonde to make a bishop kick a hole in a stained glass window."

There are literally hundreds, maybe, thousands more. Do yourself a favor. Pick up a Chandler.