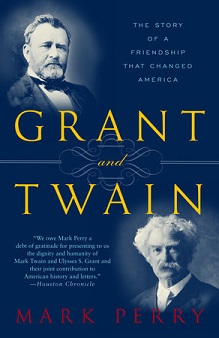 Readers who appreciate Civil War memoirs and enjoy biographies will treasure Mark Perry’s 2004 double-barreled book, Grant and Twain: The Story of a Friendship that Changed America. With a respectful nod to Pulitzer Prize winners Ron Chernow (Grant) and Justin Kaplan (Mr. Clemens and Mark Twain), one salutes Perry for creating a hybrid work focused on 18 months in the lives of two American giants at a time that produced their greatest triumphs.

By abandoning the cradle-to-grave story in favor of constructing a small keystone in the lives of these greats, Perry, who succumbed to cancer in August 2021, crafts a new kind of biography that blends the relationship between two 19th-century individuals who represented their culture and tradition yet still speak to us generations later.

From May 1884 to July 1885, Ulysses S. Grant, wracked with terminal throat cancer, wrote his memoirs, which Mark Twain helped publish to acclaim and profit while finishing his own masterpiece, The Adventures of Huckleberry Finn, a novel seven years in the making.

“This is the story of a friendship,” Perry writes in his introduction about Grant, “America’s greatest general,” and Twain, the country’s “most esteemed writer.” The relationship between these two men at the end of Grant’s life brought out the best in both, enhancing their history and enriching literature forever.

Grant, from Ohio, became an abolitionist years before Twain, from Missouri, saw the light. “In my schoolboy days I had no aversion to slavery,” Twain recalled after he published Huck Finn. He started the book in 1876 and had written 400 pages but could go no further. Seven years later, he returned to the manuscript, “when,” as Perry writes, “in the midst of his friendship with Ulysses S. Grant he finally realized what Huck Finn was really all about…It is unlikely that he could have finished it at all were it not for Grant.”

What a godforsaken world it would have been without Twain’s fictional raft trip down the Mississippi with a poor scamp and a runaway slave, and how bereft history would be without The Personal Memoirs of Ulysses S. Grant, the general who won the Civil War and saved the U.S. from slavery.

Geniuses in their own right, neither man excelled at business, but both, according to Perry, “felt the irresistible pull of wealth,” living in the era known as the Gilded Age. They aspired to be men of means and hold their own with the financial barons of their time, but both became too familiar with debt and fell into the abyss of bankruptcy.

Grant’s financial debacle dogged him with scandal at the end of his life. As he was dying, he was desperate to redeem his good name while providing for his wife and children. Twain, who revered Grant “as the greatest American since Washington,” was determined to help him by publishing Grant’s memoirs.

In June 1884, the two men joined forces and within a year and a half realized their greatest financial successes while transforming the world of American literature. Fighting through piercing pain with dollops of cocaine, Grant summoned the courage that had led to his victories at Shiloh, Vicksburg, and Gettysburg, and later to two terms in the White House. Days before he died, he finished his memoirs, which were later published to profit and acclaim.

At the same time, Twain published his own masterpiece on the evils of slavery, which Ernest Hemingway praised for its excellence: “All modern American literature comes from one book by Mark Twain called Huckleberry Finn,” Hemingway wrote in 1935. “All American writing comes from that. There was nothing before. There has been nothing as good since.”

Ulysses S. Grant and Mark Twain represent the heart and soul of America, which Perry captures in his enchanting book. He applauds their friendship, a kind of relationship he, too, had mastered, as was evident at his recent memorial service. Mark Perry died too soon at the age of 70, but he left us with a book that will live forever.

January's Slow Read is The Bridge of San Luis Rey by Thornton Wilder. This is a monthly feature by Patricia Bochi inviting readers to (re)discover a work that’s so rich and delightful it calls for slow reading to appreciate it fully.