A Conversation with Sarah Stodola 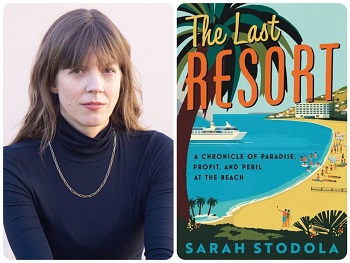 A trip to the beach is a cherished summer ritual, but did you know that the beach resort is a relatively modern invention? Before the 20th century, the seaside was viewed primarily as a place to suffer through unpleasant health cures. In The Last Resort: A Chronicle of Paradise, Profit, and Peril at the Beach, travel writer Sarah Stodola takes a sobering deep dive into the history, impact, and future of seaside holiday destinations.

In The Last Resort, you confess an ambivalence about the beach. Do you think that ambivalence is what prompted you to undertake a critical history of resorts?

I think the ambivalence was actually the key factor in my being able to successfully write this book. So much coverage of travel, especially beach travel, comes with a predetermined commitment to admiration. It was immediately clear to me, once I started paying attention to beach tourism, that it was demanding a more skeptical look. At first, I was conducting informal research as I headed to various beach destinations. But by the time I got the book deal, I was approaching beach locations journalistically, meeting with people on the ground who could help me understand the place, constantly taking notes, scouring academic journals for research, etc. It felt like getting a degree in beach tourism!

In the course of researching the book, you traveled the globe, visiting the beaches of, among other places, Monte Carlo, Da Nang, and Dakar, and resorts like the crowd-pleasing Dream Sands Cancun Resort & Spa in Mexico and the ultra-luxurious Nihi Sumba in Indonesia. How did you choose the locales and resorts?

Partially, I was looking for locations and resorts that would represent the range of experiences within beach tourism, from the backpacker-type scene on Tioman Island in Malaysia to the extreme luxury of a place like Nihi Sumba to the more regionally oriented places like the Jersey Shore. Beyond this, I looked for places in different stages of development or overdevelopment, from Senegal, a country that is trying to get its industry off the ground, to Acapulco, which is decades removed from its glamorous heyday in the 1950s and 1960s. I also chose locations that were handling ecological challenges with different levels of urgency.

The Last Resort is closely researched, pleasingly punched up with data, history, literary references, and interviews. What were some of your favorite sources?

I am so indebted to so much of the fantastic research that was published before The Last Resort! Here’s a surely incomplete list of the books I enjoyed during my research: Making Monte Carlo: A History of Speculation and Spectacle by Mark Braude; The Land Was Ours: How Black Beaches Became White Wealth in the Coastal South by Andrew W. Kahrl; Everybody Was So Young: Gerald and Sara Murphy, a Lost Generation Love Story by Amanda Vaill; Mark Twain in Hawaii: Roughing It in the Sandwich Islands, Hawaii in the 1860’s by Mark Twain; Overbooked: The Exploding Business of Travel and Tourism by Elizabeth Becker; Bali: A Paradise Created by Adrian Vickers; Barbarian Days by William Finnegan; Between Ocean and City: The Transformation of Rockaway, New York by Lawrence Kaplan and Carol P. Kaplan; Billion-Dollar Sandbar: A Biography of Miami Beach by Polly Redford; and Summer by the Seaside: The Architecture of New England Coastal Resort Hotels, 1820-1950 by Bryant F. Tolles Jr.

You’re the founder and editor of Flung, a website dedicated to travel. How did you get into travel writing?

It was honestly by accident. I knew an editor at the New York Times’ Travel section who got me my first shot at writing travel journalism, and it took off from there.

You address the ecological implications of beach tourism that have resulted in erosion, water mismanagement, coral-reef damage, wildlife endangerment, and more. What’s your advice for someone looking for an ecologically conscious beach vacation?

The easy answer is: Go to the beach that’s closest to home. That’s usually going to be the choice with the least environmental impact. The more complicated answer is: Heading to the most popular beach destinations is only going to further intensify their ecological challenges. Choosing somewhere a little further under the radar can be a better choice for both the destination and the traveler. Within those places, look for resorts that are constructed responsibly, with buildings set back from the shoreline and no seawalls, using local materials, and preserving native vegetation. Independently run resorts tend to have closer ties with the local community, which results in a more holistic attention to the immediate surroundings. And then there are the little things: Use reef-safe sunscreen, leave wildlife alone, don’t use the air conditioning constantly, order local beers and wines instead of those from, say, France.

I primarily view a beach vacation as a time to read. What do you do on the beach when not researching?

What I do is grow restless fairly quickly. In practice, this means that after half an hour or so on a lounger, I’m on the move, exploring the area, snorkeling, getting a drink, talking to people. This restlessness probably came in handy during my book research.

What kind of sunscreen do you use?

Great question! Thinkbaby Clear Zinc Sunscreen is the best reef-safe sunscreen I’ve ever come across. It doesn’t leave white residue after being rubbed in thoroughly, and it smells just great. I also have the Thinkbaby Face & Body Stick. It’s expensive, so not my go-to, but easy to keep in my bag for emergency application. On my face, I use Paula’s Choice CLEAR Ultra-Light Daily Hydrating Fluid SPF 30+. Great daily moisturizer with the sun protection included. I should emphasize that all of these products are cruelty-free.

Hands down, a freshly made piña colada.

Do you think there is such a thing as a “beach read,” and if so, what are some of your favorites?

I think the term “beach read” generally refers to an easy, entertaining book — a page-turner that’s not too challenging. It’s summer, or you’re on vacation, so you want something that’s enjoyable but not strenuous. That’s not typically the type of book I go for, but some recent reads that I flew through, thoroughly enjoyed, and was impressed by are Happy Hour by Marlowe Granados, Inseparable by Simone de Beauvoir, The Hard Sell by Evan Hughes, and Luster by Raven Leilani.

Given rising sea levels, increasingly frequent catastrophic weather events, and virulent outbreaks of sargassum and other algae, as well as other major challenges, do you think there’s a future for beach resorts?

I do, but I think they’ll look different than they do today — for one example, the coconut palm tree is not native to most beach destinations and is actually not very helpful in sustaining shorelines. Get used to beach resorts with other types of shade-giving trees over the next couple of decades. I also think it’s likely that beach vacations will become more expensive as beaches themselves become more scarce, we run out of sand with which to replenish them, insurance rates for resorts continue to soar, and locales look to cater to the high end as a way to avoid overdevelopment (the thinking being that the ecological and social impact will be less from two visitors spending $5,000 than 10 people collectively spending that same $5,000, while the economic impact will be equivalent).

Is there a beach resort you haven’t visited that you’re just dying to see, or are you done with them after this book?

It’s my great regret that I didn’t make it to the beaches of Rio during my research. On the other hand, I’m pretty happy sticking around home these days.