A Conversation with C.J. Prince

Meet the winner of the inaugural Sisters in Crime Pride Award! 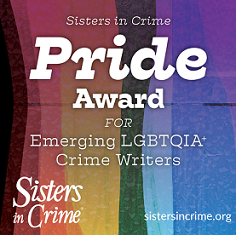 You’d be hard-pressed to find a writing organization more important, particularly in today’s political environment, than Sisters in Crime. Founded in 1986 by 26 female crime writers who were frustrated with the disparities between men and women in the genre, Sisters in Crime has since grown to over 50 chapters and is a powerful, necessary force for progress in publishing. And its mission has grown since its founding to extend beyond gender and include other minoritized groups.

I wrote about one of those efforts last year in this space: the Pride Award for Emerging LGBTQIA+ Crime Writers, the legacy project of past Sisters in Crime president Sherry Harris. The award is given for a promising unpublished work of crime fiction. This year, I’m happy to have the chance to interview its first recipient, C.J. Prince!

Prince earned a master’s in print journalism from Columbia University and has been a full-time journalist for more than 25 years. Her work has appeared in such publications as the Huffington Post, the Advocate, U.S. News & World Report, and elsewhere. She currently serves as the digital editor for Chief Executive Group’s editorial websites.

C.J.! Congrats on the big win! What’s your book about? Can you give me the elevator pitch?

The Butcher’s Son is about a detective, Mel Horowitz, who fled her Orthodox Jewish town of origin, Newstead Hills, 20 years ago after a traumatic incident outed her to the community. Now, she must return because the relative she’s closest to, her uncle Mordy, has apparently committed suicide. Forced to brave the demons she has never quite faced — including her first love, Rachel, who let her take the fall all those years ago — Mel must also start digging deeper into her uncle’s death when she realizes not all is as it seems. But, as she uncovers decades-old deception, she will have to risk her sanity, and even her life, to get to the truth.

Although it’s about a specific community, the broader themes are universal: How much internalized shame do we carry from childhood trauma, and what do we lose by refusing to look at it? Mel has never had a real relationship, and although she’s a great detective, she sabotages her advancement and moves to a new city whenever the mess she’s made gets to be too much for her. She finally has a chance, albeit not by choice, to stare down the monsters that have been living under her bed and perhaps find she is stronger than them now — or not.

I should add that the book is not about demonizing the Orthodox Jewish community, and there are several characters in the story who are kind to Mel and supportive, but she has to realize that (although there are a few bad guys there) the enemy isn’t in Newstead Hills, but inside her.

What led you to submit to the Sisters in Crime Pride Award?

I’d never applied for any sort of fiction award before and, honestly, never thought I would. But I happened to open a Sisters in Crime email and saw that the deadline for a new Pride Award was coming up in a week. Given the subject matter of my book and the description of the award, it just seemed like a good fit and a good time to hold my breath and let someone else see what I’ve been working on.

Can you describe the moment when you found out you won?

I was in the city, about to go on a first date with a woman I’d met on a dating app. I was standing on the street when I read the email, and the first time I read it, I didn’t understand that it was telling me I won. It was kind of surreal, honestly, because I’d never let anyone outside of my writing group read my work, and to have that recognition the first time I did was just huge. I thought, maybe I really do have something here…

It also gave me something to talk about on my date, because I was still kind of reeling. And in a really crazy coincidence, the woman I was having dinner with had attended my Orthodox Jewish elementary school, so she was very interested in the storyline of my book. The date went very well…last month, we celebrated our one-year anniversary.

Aw. What's the next step for your book?

The next step for my book is to finish it — I’m almost there. Then it’s time to start pitching, which will be terrifying, but I’m looking forward to it. This book has lived with me for many (many) years, and it’s definitely time to not-so-gently push it from the nest.

Who are some writers who’ve inspired you?

Some of the writers who have most inspired my work are (in no particular order) Stephen King, Gillian Flynn, Dave Eggers, Michael Chabon, Jeannette Winterson, Ann Patchett, Barbara Kingsolver, David Sedaris, [and] Jeffrey Eugenides.

Thanks for your time, C.J., and congrats again on winning the inaugural Pride Award! As a reminder, the Sisters in Crime Pride Award is given annually, and it’s open for nominations through July 31st. Learn more about it HERE.

Free Speech May Cost You

The case of Milo Yiannopoulos and the missing $250,000