13 Best Novels of the Year 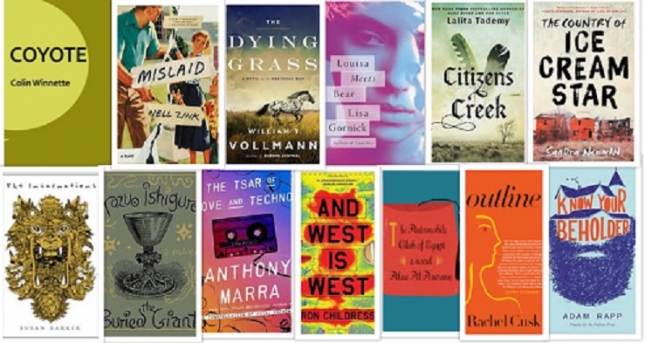 And West Is West by Ron Childress. This winner of the PEN/Bellwether Prize for Socially Engaged Fiction is a smart, satisfying work about real people navigating the uneasy compromises of today’s world. With sharp writing and likeable characters, Childress has woven a very human story out of the tangle of conflicts — military, political, financial — that binds us all together.

Know your Beholder by Adam Rapp. An account of one man's grueling journey through the dark night of the soul, this story is courageous and deeply psychological.

The Dying Grass by William T. Vollmann. This hefty fictionalized account of the Nez Perce War coalesces into an unforgettable, singular reading experience.

The Buried Giant by Kazuo Ishiguro. A touching yet troubling tale of an elderly couple struggling against a widespread mist of forgetfulness in post-Arthurian England. Their adventure approaches, at times, a Monty Python caper, but the lightheartedness is a clever disguise for a troubling meditation on the implications of memory.

Citizens Creek by Lalita Tademy. This well-told story examines an often overlooked part of American history. A young Native American travels from slavery to landowner thanks to his own ingenuity and skills with language. He is a translator who can speak to both the Europeans and the Indians as they vie for land they each feel the right to own.

The Automobile Club of Egypt by Alaa Al-Aswany. This transportive novel is set in 1940s Cairo, where an auto club serves as a nexus of fear and hope for the Egyptians who work there; as a private playground for the European expats hoping to amass fortunes unattainable elsewhere; and as a home base for others who find they belong nowhere else in the world.

Coyote by Colin Winnette. Packing a much heavier punch than its slimness would indicate, Coyote is a haunting, tragic story of parental love, a missing child, and madness.

Mislaid by Nell Zink. Although this novel garnered plenty of attention for its bold take on heavy-hitting issues like race, class, and sexuality, one of its strengths has often been overlooked: It is very, very funny.

The Country of Ice Cream Star by Sandra Newman. This heartfelt, compelling tale of a post-apocalyptic world populated by young people is challenging to get through — partly because of the unusual hybrid language used throughout — but readers who persevere will be richly rewarded.

The Tsar of Love and Techno by Anthony Marra. This luminous collection of fully intertwined stories discovers humanity and sanity amidst the wreckage of war and repression. The unadorned language is searing, funny, brutal, and heartbreaking, often all at once.

The Incarnations by Susan Barker. A wild ride through centuries of Chinese history, this vivid array of tales is woven around the central story of a Beijing cab driver stalked by a mysterious pen pal claiming to be his soulmate.

Outline by Rachel Cusk. Through searching conversations a writer has with the people she encounters while teaching in Athens, her interlocutors' confessions of their failures and disappointments give shape to a narrator who never fully reveals herself in this brainy meditation on how we make life into fiction through the stories we tell.

6 Tips for Making the Most of Malice