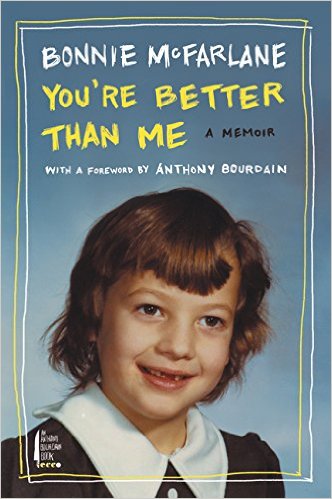 Anthony Bourdain writes in the foreword of Bonnie McFarlane’s new memoir: “Some people have a unique voice — a special way of looking at the world, seeing it, describing it. Others have a story.”

Bonnie McFarlane has both. Her book, You’re Better Than Me, is a captivating read about her unusual upbringing in a Canadian farming family (no running water or television) and her sudden decision to become a comedian.

As an author, McFarlane is brash, charming, and, yes, funny — I was laughing throughout this book. Her early career was a whirlwind of rapid success and stunning public failures and, to that extent, sections of this memoir read like a fast-paced thriller.

That is, a fast-paced thriller with humor. McFarlane writes, “I fielded questions with the ease of a sociopath.” And, “My plaid wood chopping flannel jacket and my inability to curb my ‘Sorrys’ were straight out of his Dummy’s Guide to Spotting a Canadian.”

Yet there were times when I wanted to know more about McFarlane the human: her unusual childhood, her stiff-lipped family, how long she lived in that person’s garage…details I hope she might address in another memoir. But in this one, it’s best to save those questions for a later Wikipedia search because diving to those depths would have taken away from the style here — deliberately written as comedic set, with a lead up and a punchline.

Unless you’re interested in getting into stand-up comedy yourself, this may not be the kind of book that is necessarily going to change your life. You won’t be staying up late to read it. Nor will you be crying into your pillow later. But I did find McFarlane’s memoir to be inspirational in the way that she just keeps picking herself off the ground and continuing onward. Take note: No one pulled strings for her. She got noticed in the business because she worked damn hard at it.

Near the end of the book, I was struck by how McFarlane, with great tact and humanity, wrote about the death of a fellow comic and friend. I admire how succinctly she was able to describe a moment of tremendous personal grief and regret. This is certainly a passage I will reflect back on again and again.

Another serious theme that she shines a light on, yet with an admirably subtle touch, is the undercurrent of misogyny that exists in professional comedy. Better now than when McFarlane first started out, it only takes a quick scroll through the stand-up comics featured on Netflix to see just how rare it is for a woman to break out in this man’s world.

No one is batting an eye that Hillary Clinton is running for president. Yet if Hillary were to try and do a set at a comedy club, she might find it less than welcoming. But with McFarlane’s usual cheer, she turns it all into a joke, using “But I did Letterman” as her mantra through difficult times in life.

So do you need a pick-me-up? Some encouragement for how to keep going when life is throwing you sucker punches? Read this book. Bonnie McFarlane is a successful stand-up comedian. And now she is an inspirational author. Encore, Bonnie, encore.

By Jason Felch and Ralph Frammolino

A riveting investigation of the Getty’s acquisition practices sheds light on illegal activities in the world of high culture.