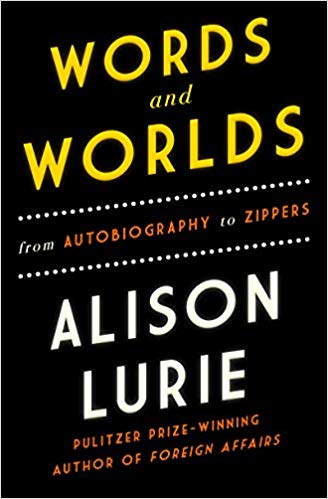 Alison Lurie is best known for her wickedly on-point, interconnected novels that skewer the incestuous, internecine world of elite academia into which (beginning at Cornell) she has had an intimate view. The novels that garnered the most attention were The War Between the Tates and Foreign Affairs; the first, Love and Friendship, came out in 1962.

Now, 57 years into her publishing career, Lurie brings us this eclectic collection of essays that runs the gamut of subjects, as the book’s subtitle suggests. (And, just as an aside, the preface is as much an essay as any of the other pieces in the book; don’t skip it.)

Essays have become increasingly popular in recent years, which, on reflection, is not as surprising as it might seem. In a world of decreasing attention spans, essays are the nonfiction equivalent of short stories or flash fiction, offering the reader a quick fix of insight and illumination without a huge time commitment.

In this collection, Lurie’s essays are divided roughly into topics, hinting at what you’ll find there, though there’s as much of her own story in, say, her essay on her good friend Edward Gorey, found in the section titled “People,” as in the two essays that start the collection, slotted under “Personal History.”

Those first two were among my favorite in the collection. Perhaps because I’m a novelist, “Nobody Asked You to Write a Novel” had significant appeal, but primarily for her story of growing up feeling like an outcast, “a skinny, plain, odd-looking girl” who appeared to have no particular skill or talent beyond her creativity — which, as we’ve all been told in our own childhoods, is not what’s going to pay the bills.

It was as a new mother at age 26 that her husband told her, “After all, Alison, nobody asked you to write a novel.” That day, she gave up being a writer for an hour, determined to ignore the observations she made on her daily walk with the baby, until she decided, “This is stupid.”

Later, under 1950s peer pressure to be happy with her husband and children, she truly gave up writing for over a year and was miserable. That’s how you know you’re a writer — when not writing causes you pain.

Though Lurie is best known for her fiction, she was taken early with the power of nonfiction. A point she makes in two essays is that the chronicler need not dissemble to direct the reader’s perception of a person or event; it’s merely a question of selecting which details to include.

“I found that without actually lying I could describe events and person in such a way that my readers would think about them as I chose.” Her two examples of writing about the same person illustrate her point: “We have a new English teacher. He has a lovely wild curly brown beard and gets really excited about poetry and ideas,” but later, “He is a small man with yellow teeth and a lot of opinions.”

Her take-away from that discovery: “That was what you could do with just a piece of paper and a pencil; writing was a kind of witch’s spell.”

The other essay in “Personal History” is “Their Harvard,” which first made me consider how far women have come, and then reconsider how it’s not so far as all that. Here, Lurie describes her college experience at Radcliffe, when it was thoroughly separate from Harvard, and the Radcliffe “girls” were beneath acknowledgement (or suffered the ridicule) of the Harvard men.

“[We] were invisible to many of our instructors, who continued to address the class as ‘Gentlemen’ and would not see our raised hands during the question period.” Lurie and her friends kept their hands down and looked askance at any peers who had the gall to raise them. “[We] considered such behavior rather pushy, possibly a sign of emotional imbalance.”

Another section is “People,” which includes four sketches of dear friends, each of whom was brilliant and fascinating — and makes a reader long to know such people or, even better, to be one of them. Lurie already captured a fifth brilliant and fascinating friend, V.R. “Bunny” Lang, in a 1959 memoir (friends had 300 copies printed) that eventually got the author her first book contract.

(Here’s something I learned from the profile of Barbara Epstein, even though I should have known already: The New York Review of Books, co-edited by Epstein and Robert Silvers, was founded as a temporary replacement for the New York Times Book Review during the 1963 New York newspaper strike. Would that all our temporary endeavors would find such acclaim and endurance.)

Lurie is a professor emerita at Cornell, where she started the study of children’s literature; she also edited The Oxford Book of Modern Fairy Tales — hence the numerous essays here on children’s books and fairytales, as well as one on witches.

I found myself thinking, “Don’t you be talking smack about Babar,” one of my favorite characters as a child, but, of course, every children’s story or fable is layered with meaning, and Lurie deconstructs everything from the earliest iterations of Pinocchio to the controversy over Christian symbolism in C.S. Lewis’ Narnia tales.

So, what about zippers? The author, who wrote The Language of Clothes, has spent a lot of time considering what our clothes say about us before we ever get a word in. She notes that zippers changed forever what it took to get dressed, and, more importantly, undressed.