Wild Bill Donovan: The Spymaster Who Created the OSS and Modern American Espionage

A story of bravado in early shadow warfare. 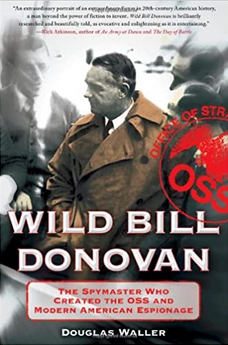 Maj. Gen. William Joseph Donovan, who earned the nickname “Wild Bill” in World War I, is an icon among those in the intelligence community. His career exemplifies the tensions that dominate the intelligence profession even today: heroism tempered by hubris. The only man to win the Army’s top three medals in World War I — including the Medal of Honor — Donovan “stole the sun from anyone around him,” as one of his son’s friends observed. A 1940 movie, The Fighting 69th, detailed his early military exploits, and as director of the Office of Strategic Services (OSS) in World War II, he debarked with invading troops so often that military commanders worried his presence would tip off the enemy.

Blessed with endless energy and bored with day-to-day management and bureaucratic infighting, Donovan often risked his life needlessly, perhaps most spectacularly in northern Burma when he was flown to clandestine outposts. To make the return flight, the aircraft, a single-engine unarmed biplane, had to bank violently to the right immediately after takeoff, fly sideways through a small opening in the foliage, and dip to within 5 feet of the earth’s surface before leveling off.

Descended from the impoverished O’Donovans who fled Ireland for the United States, the handsome young Will Donovan was a mediocre student — he couldn’t spell but excelled in public speaking, debating and competition sports. After graduating from Columbia Law School, Donovan earned millions in his law practice, organized a national guard unit called Troop I, and in 1917 deployed with the 165th (originally the 69th “Fighting Irish”) Regiment to France to fight the German army. There, wounded and carried by his own men, he refused to be evacuated and continued to fight.

In the 1920s Donovan moved into the federal bureaucracy, where he first clashed with J. Edgar Hoover, head of the Justice Department’s Bureau of Investigation. The enmity between the two men continued into the 1940s, when Hoover was chief of the FBI and Donovan was named by FDR to head the OSS, which was responsible for intelligence and subversive operations to support the U.S. role in the world war.

Throughout the war, Donovan repeatedly tried to centralize intelligence operations under the OSS but was thwarted by his bureaucratic adversaries. As the war drew to a close, someone (almost certainly Hoover) leaked Donovan’s proposal to create a central intelligence authority after the war. Anti-administration newspapers accused Roosevelt of playing dirty political games around the world and charged that FDR would be snooping on American taxpayers. As a consequence of the leak and snipes from Donovan’s enemies, first Roosevelt and then Truman refused to institute a national intelligence agency. Truman finally succeeded in establishing the CIA in 1947. But he rejected Donovan as its head. Hoover and company had won, but it was not enough. After Donovan’s 1959 death from arteriosclerotic atrophy of the brain, Hoover tried to destroy Donovan’s reputation by spreading a rumor that he had died of syphilis.

History righted the wrong. In the 1980s, CIA Director Bill Casey commissioned a bronze statue of Donovan that still stands in the CIA building foyer, close to the words carved into a marble wall: “And Ye Shall Know the Truth and the Truth Shall Make You Free.” Although he was never honored with the title, many in the CIA consider Donovan to be the first Director of Central Intelligence.

Douglas Waller’s meticulous detective work enabled him to reconstruct the history of Donovan, a leader who, like many heroes in the intelligence trade, is almost unknown to most Americans today. A former correspondent for Time and Newsweek who has covered the Pentagon, Congress, the State Department, the White House and the CIA, Waller spent three years intensely researching Donovan throughout the U.S. and overseas.  He arranged to have translated, apparently for the first time, hundreds of pages of captured German documents in the U.S. National Archives. Along the way, he uncovered recently declassified material not available to Donovan’s earlier biographers.

Among the new revelations are Donovan’s covert program to topple or assassinate Hitler and his spying in China, which was kept secret from Chiang Kai-shek.  Waller’s interviews of surviving members of the OSS and Donovan’s family bring human warmth to the picture of the larger-than-life spymaster.

Waller’s writing is always sterling. His long experience as a journalist is evident in his deft handling of prose so well crafted that the reader sails through the book without stumbles. Waller adds almost three dozen photographs and, for the moles among us, a well-wrought index 17 pages long.

The narrative suffers from one minor flaw: Waller’s habit of telling us the month an event happened but not the year. Because the story is not told in strict chronology but by major subject, I found myself flipping back in the text to pin down the year.

More important is the possibility that the unwary reader may be misled as to the OSS’s importance in World War II. Waller’s focus is on Donovan, not on the history of U.S. intelligence. And only at the end of the book does he tell us that despite the bravado of Donovan and his crew, and the more than 2,000 medals they received, the OSS’s contribution to winning World War II was small.

“Shadow warfare was no match for brute force,” Waller says. That is, the covert warfare and sabotage were a bother to Adolf Hitler, not a strategic threat. The actionable intelligence the OSS produced was not key to winning the war, nor did it shorten it.  Only in passing does Waller mention the major intelligence contributor during the war  — communications intelligence — which was not under Donovan’s control. Polish, British and American intercept and decryption of German and Japanese radio traffic (an effort covered by the code words Ultra, Purple  and Magic, among others) arguably shortened the war by as much as four years. Waller admits as much in the book’s epilogue, noting that “all the intelligence the OSS produced never matched the value of the Ultra electronic intercepts in Europe and Magic in the Pacific.”

But, in fairness, evaluation of intelligence successes during the war is not Waller’s purpose. As he makes clear, Donovan’s achievement, in the end, was not so much the information he produced but his vision of the need for a centralized intelligence apparatus even in peacetime, a need only imperfectly realized even today.

Intelligence operative Tom Glenn spent the better part of 13 years shuttling between the United States and Vietnam in support of covert operations. He was evacuated under fire during the fall of Saigon in 1975.