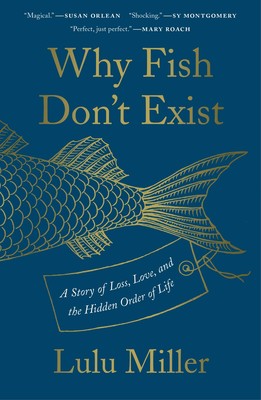 Imagine that you’re 7 years old, enjoying a quiet, early morning moment with your dad, watching backyard wildlife, and you innocently ask, “What’s the meaning of life?”

Rather than fumbling for an answer, he gleefully replies, “Nothing!” and proceeds to explain how no one — not you, not he, nor anyone you love, nor anybody at all — matters.

That sort of definitive proclamation on the pointlessness of existence is bound to leave a mark, and so it did on young Lulu Miller. In a roundabout way, it was what led her to write this book.

Miller is an award-winning science reporter and cofounder of the NPR program “Invisibilia.” A strong thread of memoir underpins this, her debut book, which also includes biography, scientific inquiry, civics, investigative journalism, musings on psychology, and, yes, an answer to the book’s central question.

Not incidentally, Why Fish Don’t Exist is beautiful. Beyond its blue and gold cover, the original, intricate illustrations — created on scratchboard by artist Kate Samworth — that accompany each chapter are captivating, with an otherworldly, even nightmarish quality. They lend the book an air of antiquity, as though the reader is holding a 19th-century science text or a Bible.

Much of Miller’s focus here is on David Starr Jordan, president of Indiana University at age 34, first president of Stanford University, and acclaimed taxonomist of fish. It’s estimated that Jordan and his team discovered and named fully one-fifth of the fish known to science.

In 1883, lightning started a fire in Jordan’s IU lab, destroying his entire amassed collection. Then, during the 1906 San Francisco earthquake, his rebuilt ichthyological collection — floating in jars stacked on shelves in a lab on the young Stanford campus — came crashing down.

Jordan’s perseverance in facing such loss, twice, is what caught Miller’s attention as she was attempting to pick up the pieces of her own shattered life and recurrent struggles with suicidal ideation.

Miller was especially taken with his approach after the earthquake. He had his team train hoses on the collection for 48 hours until he could collect enough alcohol and jars. Then he began to reunite fish with their identification labels. Whenever he was able to identify a fish, he sewed the tag onto its body before putting it back into a jar.

The author tries to understand the wellspring of such dogged determination in the face of chaos. In studying Jordan, she finds much to admire — until she starts to uncover things that aren’t so admirable.

Though she does not accuse him outright, Miller makes a compelling case that Jordan was responsible for the poisoning death of Jane Stanford, cofounder of the university. She was poisoned twice with strychnine — Jordan’s favored method to bring up small, elusive fish — and Jordan’s labors to cover up and rewrite the events ensured that her death was accepted (at least until the 1980s) to have been from natural causes.

Later on, Jordan was also a singularly outspoken proponent for eugenics and the forced sterilization of people he deemed unfit. Indeed, the pacifism he preached in the lead-up to the Great War sprang from the idea that the best of a generation were killed in wars, leaving the less desirable to live on and contaminate the gene pool.

One of the most instructive threads in this wide-ranging narrative is Miller’s revisiting of America’s leading role in the propagating and practice of eugenics, in which the U.S. example proved instructive to Hitler’s plans for Nazi Germany. Indiana led the way in 1907 with the first forced-sterilization law in the world. In the time since the U.S. Supreme Court ruled forced sterilization constitutional, 60,000 such procedures have been performed in the United States.

As Miller points out:

“The ruling that made all this possible, by the way, is still on the books. That’s right. The Supreme Court ruling has never been overturned. At our highest level, it is still written into law that if the government deems you ‘unfit,’ officials have the authority to pull you from your home, stick a knife through your abdomen, and terminate your bloodline.”

Throughout, the author searches for insight, for answers. How could a man of science take such a wrong-headed lesson from Darwin, for whom variation is the source of any species’ strength? If nothing matters, why should your treatment of fellow humans? How does any life derive meaning in the face of an uncaring universe?

Though sometimes a bit breathless in her re-imagining of scenes or pondering of psychological motivations, Miller succeeds in pulling the many threads of her story together to intriguing and illuminating effect.

And what of the fish? Why, exactly, don’t they exist?

The answer is something of a punchline to all that has gone before — Miller savors it as a bit of cosmic comeuppance for Jordan — and is delicious enough that describing it here would be a spoiler. The upshot is that fish have been dead to taxonomists since the 1980s; the rest of us just didn’t read the obituary.

To name something is, in many ways, to stop seeing it: Once something is known, ordered, there is no need to look further. Miller’s assertion is that we need to keep looking and to see with better eyes.

An investigation of recalling it all.