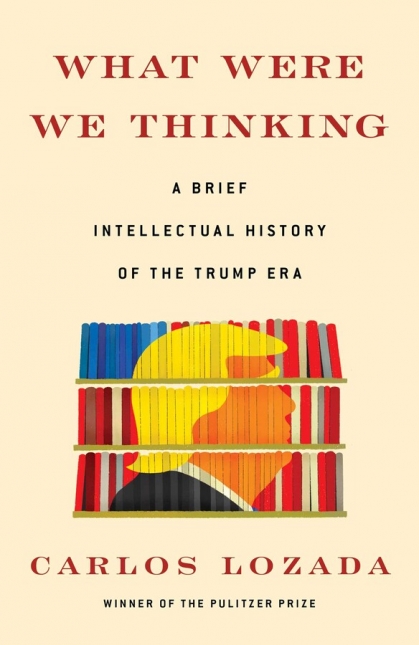 In July 2015, early in Donald Trump’s campaign for president, Carlos Lozada — himself early in his role as nonfiction book critic at the Washington Post — proposed a project in which he would “binge-read a selection of the candidate’s books published since the 1980s.” (Apparently, 12 books bear the president’s name as author. Who knew?)

As it turned out, Lozada has ended up reading around 150 books written about Trump and the Trump era, which he notes is “just a fraction of the Trump canon.”

The resulting collection of critiques forms What Were We Thinking: A Brief Intellectual History of the Trump Era. Since so many of these books were banged out quickly in order to capture the immediate zeitgeist — and to cash in on the outrage felt by the portion of the population that would actually read books — Lozada notes that a good percentage of them lack solid analysis or a longer view of the lasting effects on our American experiment.

Of the various categories, he notes, “The resistance lit can be among the least inspiring subgenres of this era.” Still, he has found a number of books to have gained a bit of gravitas as time goes on, and to have proven worthy of further thought and consideration. In fact, “The most essential books of the Trump era are scarcely about Trump at all.”

Lozada’s focus in pulling this book together is to “preserve a snapshot of how we grappled with the Trump era in real time. I want to remember what I thought about it, too.” So the title isn’t a form of asking, “How stupid could we be?” Instead, the author is genuinely trying to capture what we, collectively, were thinking as these events unfolded over four years.

He uses his chapters to organize books by theme, such as “Heartlandia” (a romp through earnest and lengthy dissections of “the Trump voter,” native to “Trump country” — wherein a single Trump voter, Ed Harry, is featured in three books), “True Enough,” and “Russian Lit.”

In the chapters, Lozada weaves together discussions of the books grouped under that particular heading, comparing and contrasting, playing them off each other, or seeing how they coalesce to form a larger argument. Most helpfully, at the end of each chapter, he lists the bibliography of all the titles he’s been discussing.

That Lozada is an immigrant adds an extra dimension to his critique of these Trump-era works. He describes himself as having “the zeal of a new American” and notes:

“The 2016 presidential election was my first as a U.S. citizen and voter, and Trump’s rise in national politics has coincided almost exactly with my time as a book critic. The demands of both literature and citizenship will forever shape the way I view this presidency.”

Fans of Lozada’s critiques in the Post can look forward to a longform version of his cogent, thoughtful, and comfortably familiar tone, as though he is exploring his thoughts on these books over a leisurely lunch with friends. He doesn’t give a pass to lazy, self-indulgent writing or poorly supported arguments from either side of the partisan divide. Authors need to bring their A-game for their efforts to get Lozada’s approving nod.

One that does is Yuval Levin’s A Time to Build, which Lozada calls “that rare work of the Trump era — the book I didn’t realize I was hoping to read.” Levin argues that we should be rebuilding institutions for the value of the normative behavior they impose on their members.

That might seem a counterintuitively restrictive argument, but the overarching question Levin feels those members should ask is, “Given my role here, how should I act?” It’s a question we might beg our attorney general or senate majority leader to ask himself, as much as we would the president.

Another book Lozada points to is A Lot of People Are Saying: The New Conspiracism and the Assault on Democracy by Russell Muirhead and Nancy L. Rosenblum, whose antidote to what ails us is similar to Levin’s: Get back to the basics of how our public processes are supposed to work:

“This is the Trump presidency as a teachable moment for a democracy that has forgotten its civics lessons or, remembering them still, has decided they don’t matter.”

In “The Conservative Pivot,” Lozada voices my exact thoughts in considering the flood of books from Never Trumpers. He notes that “it took the nomination, election, and presidency of Donald Trump” for them to “think to interrogate the conservative dogma they’d long defended. Only with Trump did they begin to reconsider their roles in feeding a frenzied base.”

Indeed, I have often imagined that if we had dodged the Trump bullet in 2016 and were currently in election season for Hillary Clinton’s second term — an alternate reality in which we would now be down to six SCOTUS justices given Mitch McConnell’s pledge never to bring a Clinton nominee to a vote, and faced with a U.S. covid-19 death toll of, say, 3,000 — these same folks would still be employing the scorched-earth tactics against Democrats they’ve used for years and telling themselves it’s for the greater good.

I’ve read only a tiny minority of the books Lozada cites, including two I reviewed for the Independent: Katy Tur’s Unbelievable: My Front-Row Seat to the Craziest Campaign in American History and Susan Hennessey and Benjamin Wittes’ Unmaking the Presidency: Donald Trump’s War on the World’s Most Powerful Office. The latter finds its way into Lozada’s epilogue, in which he lists the dozen books he finds most illuminating of their subject, the “works that have best helped me make sense if this time, the ones I suspect I’ll revisit long after the Trump era has become a subject for works of history.”