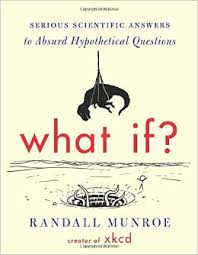 In at least one respect, the contents of Randall Munroe’s What If? Serious Scientific Answers to Absurd Hypothetical Questions come as a huge relief. The cover shows a T. Rex being lowered by crane into the mouth of the “Star Wars” monster known as a sarlacc.

Any number of inane questions come to mind, most of them promising a tedious read. Is this the version of a sarlacc with or without a bean-shaped beak? How wide can a sarlaccian sphincter stretch? And if it takes a sarlacc a thousand years to digest a person, how long…

But never mind. There’s only one question anyone cares about. How the heck did Boba Fett get out of that thing, anyway?

What If?‘s cover, that is to say, seems to promise a long descent into the bottomless pit of fanboy balderdash. I had my fill of that stuff in college, and the prospect of 300+ pages discussing factoids culled from Wookiepedia is, like the appearance of the sarlacc itself, unappetizing.

To be sure, there’s plenty of geeky woolgathering in What If? (How much Force power can Yoda output? And while we’re at it, how many midi-chlorians can dance on the head of a pin?) But the book as a whole is wide-ranging and strangely poignant.

The T.-Rex-versus-sarlacc image comes from Munroe’s website, where he runs a feature with the same name as this book. Readers submit oddball hypothetical questions, some familiar, some freakish. “What if everyone actually had only one soul mate?” “What would happen to the Earth if the sun suddenly switched off?” “What if a woman were to have sperm cells made from her own stem cells and impregnate herself…”

Munroe, a former NASA roboticist, now a web cartoonist, uses math, imagination, madness, and oodles of doodles to puzzle out the answers. Sometimes the questions can be dismissed with a quip and a sketch. Usually, the answers run on for several pages of bizarro-land speculation.

Geek topoi abound. The question about a woman impregnating herself is modeled using D&D-style attributes (e.g., Str., Con., Dex.) as a stand-in for human chromosomes. A chapter about sunsets is larded with terminator puns. Smarty-pants topics like informational entropy and relativity bump up against sea-spanning Lego constructions and LOTR lore. Even seemingly benign experiments — like using laser pointers to light up the moon — soon wander, like a cackling mad scientist, down world-destroying tangents.

This book is tons of fun. But is it more?

In a recent New Yorker article, Maria Konnikova used What If? as a springboard for a broader examination of curiosity. These are the kinds of intriguing questions, she suggests, that can actually get folks interested in science. Judith Donath echoed that take in the New York Times and, indeed, it’s an old apologia on behalf of science fiction: A spoonful of fiction helps the science go down.

Munroe’s spiffy essays do tend to resemble the sort of lectures that cool professors give on the first day of class or the Wednesday before Thanksgiving: teasers for the dumb kids, treats for the smart ones. But let’s do his book the favor of taking it on its own terms. This isn’t a dork-recruitment tool. It’s quality entertainment.

Which makes What If? something of a challenge for a book reviewer. At a glance, it can be waved off as a treasury of “whoa, dude” delights, packed with dinos and lasers and grotesque ways to die. No harm in that, but what more do you say? Once you’ve absorbed this stockpile of equations and carnage, deeper themes emerge.

The first is a kind of extended study on the limits of mathematical modeling. Sure, Munroe says, we can calculate statistically the odds of two soul mates encountering each other. We can model seismically what might happen if everyone on Earth gathered together and jumped at once. But is that the end of the story?

Time and again, he throws down a calculation only to sweep it off the table. The math serves mostly to set certain limits. The real fun (and the big punchline) comes when we push against those limits — how we adapt, how we cheat, the choices we make.

The second theme is that life as we know it, scientifically speaking, is a pretty dicey business. Take any situation with people in it, describe it using numbers, change any of those numbers by even a modest amount, and — whoops! Look what happens. All the people die.

Any moderately well-informed reader already knows, of course, that whether your frame is cosmic, geologic, ecological, or even historical, human life is a result of either wondrously lucky happenstance or supernatural fine-tuning. But it’s quite another thing to see so many hapless stick figures mulched into dust by applied math.

Suppose you traveled a million years into the future, Munroe posits at one point. There’s no doubt in his mind: Humanity will be gone, and no sign of our former presence will remain — save for a mysterious, thin deposit of ground-up plastic.

It’s tempting to end on that image, but one question must still be answered. Who needs a book of stuff that’s already online? The physical version of What If? is a handsome product, made of thick paper, nicely bound. And the two collections aren’t identical: There’s a ton of content in the book that’s not on the web.

Besides, there’s one timeless, maybe inevitable use for an anthology like this. Push aside your Dave Barry. Throw out your Uncle John. Make room near your toilet for Randall Munroe.