Votes for Women! American Suffragists and the Battle for the Ballot

A candid, kid-friendly history of the fight for women’s rights. 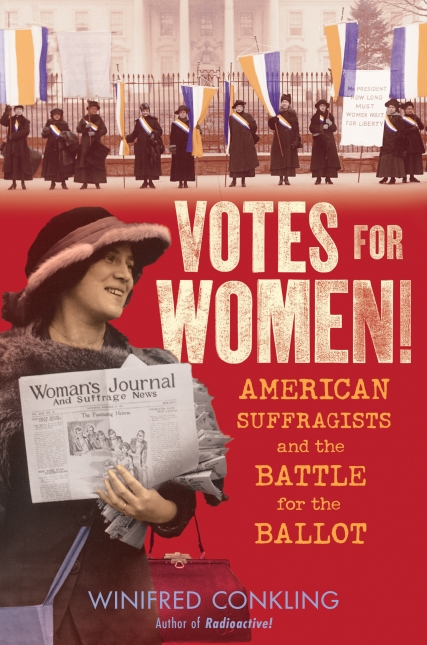 As we prepare for the 2020 celebration of the 100th anniversary of U.S. women receiving federal voting rights, books recounting the suffragists’ long fight are starting to roll out. Winifred Conkling’s contribution, written for young adults, is an excellent history for all readers, detailing the long, tangled, and sometimes violent path to the passage of the 19th Amendment.

Conkling takes a straightforward approach to relating the history of the movement and the women who drove it, many whose names we know, from Elizabeth Cady Stanton to Susan B. Anthony to Alice Paul, and a number whose fame (or notoriety) has not lasted as long, like Victoria Claflin Woodhull and Carrie Chapman Catt.

The narrative starts with Elizabeth Cady learning that, in her world of early-19th-century Upstate New York, even the most determined girl could not make a contribution equal to a boy, laws and culture being what they were.

However, she was allowed to attend Troy Female Seminary, which offered a curriculum competitive with those offered to men, and she had the benefit of spending summers with her rich and progressive cousin, Gerrit Smith, who gave her freedom to exercise her forward-thinking ideas.

In part, the push for women’s rights was driven by the abolitionist movement, since women wishing to speak in public against slavery were accused of being “unwomanly and unchristian,” because, at the time, it was considered unseemly for women to speak in public.

The movement was also tied to the temperance movement, widely seen as a women’s issue because of the damage men’s excessive drinking caused to families. Without the vote, women had no formal way to press for change.

Newly married Elizabeth Cady Stanton met abolitionist Quaker Lucretia Mott in London in 1840 at the World Anti-Slavery Convention — which, ironically, would not allow women to be delegates. By the end of the event, the pair had made plans to hold their own convention to “form a society to advocate the rights of women,” according to Stanton.

The Seneca Falls Convention of 1848 is widely seen as the start of a formal movement focused on women’s rights. Even there, the idea of suffrage was considered outrageous, and Mott shied away from making it a point of discussion.

Since no nation yet recognized women’s right to vote, she feared it would make the women look ridiculous. It appears to be Frederick Douglass’ impromptu speech to the gathering of more than 300 women that allowed the resolution for suffrage to pass.

Susan B. Anthony, a temperance champion, had no interest in women’s rights until she was repeatedly told that, as one, she could not speak at temperance conventions. She and Stanton met in 1851and immediately formed a bond that lasted 50 years.

During the Civil War, women’s suffrage took a back seat to the cause of ending slavery, and it was generally seen to be risking both issues to pair them together. The 13th Amendment ended slavery, and the 14th guaranteed citizenship and civil rights to male former slaves. The dual causes of emancipation and women’s suffrage, which had often supported each other, were now bitterly at odds.

When the issue of the 15th Amendment arose, guaranteeing voting rights regardless of race, color, or previous condition of servitude — with no mention of gender since it was already in the previous amendment — Stanton and Anthony campaigned against it, Stanton sometimes using racist arguments.

The episode drove a wedge into the unity of the suffrage movement, as did free-love advocate Victoria Claflin Woodhull, whose scandals in the name of suffrage cost the movement significant support and set its efforts back years.

As the century turned and both Stanton and Anthony passed the reins to the next generation, the wind was out of the movement, and it lagged until 1910. Carrie Chapman Catt took over as president of the National American Woman Suffrage Association, but it was Stanton’s daughter Harriot Eaton Stanton Blatch, along with Alice Paul and Lucy Burns — all strongly influenced by the militant tactics of the British women’s movement — who get the most credit for reinvigorating the U.S. efforts.

Paul’s huge march in Washington, DC, in 1913, and the melee that it caused, engendered widespread attention. (Oddly, the author states that only spectators were hurt in the semi-riot, when it seems well-documented that many marchers were taken to local hospitals.)

Paul and Catt’s approaches to winning suffrage were often at loggerheads, especially when Paul’s “Silent Sentinels” began to picket the White House — the first group ever to do so — and later to get arrested. The women’s infamous mistreatment in prison was yet another rallying cry that brought people to the movement.

The “Susan B. Anthony Amendment,” the 19th, was passed in the U.S. House and Senate in May and June 1919, respectively, and was finally ratified in a nail-biter vote in Tennessee in August 1920. Catt, supportive of President Woodrow Wilson and seen as the moderate voice for suffrage, was invited to the White House for congratulations, while Paul, the impatient, rude agitator, was snubbed.

Given the current political engagement of teens embodied in the #NeverAgain movement, perhaps the most useful lesson for this book’s target audience is the unflagging determination with which two generations of women pressed what often seemed like a hopeless cause.

Winning a pitched political fight is rarely brief or straightforward, but the victory — almost always — goes to the side that refuses to give up.

Jennifer Bort Yacovissi’s debut novel, Up the Hill to Home, tells the story of four generations of a family in Washington, DC, from the Civil War to the Great Depression. Jenny is a member of PEN/America and the National Book Critics’ Circle and writes a monthly column and reviews regularly for the Independent. She is chair of the 2018 Washington Writers Conference and is president of the Annapolis chapter of the Maryland Writers Association.

By Aziz Ansari and Eric Klinenberg