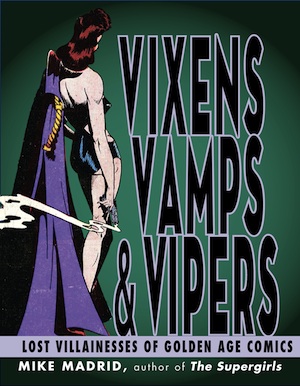 Mike Madrid is clearly fond of old, crazy comics. Where his previous and similar Divas, Dames & Daredevils reprinted Golden Age stories of forgotten heroines, this follow-up tackles the bad girls. In Vixens, Vamps & Vipers, Madrid has found 22 now-unknown female villains, and he shares a representative adventure for each with us.

The stories in the book date from 1940 to 1950, with the majority originally published in 1942 or 1943, so the art is rougher than we expect now, but the stories have a primitive sense of passion and energy. There are four sections, each with an introduction, a text rundown of character profiles, and a reprinted story for each character.

“Vicious Viragos” presents criminal leaders seeking riches and power. “Beauties and Beasts” contains women who are motivated by their looks or exaggeratedly scarred. “A Rainbow of Evil” shows women of color who demonstrate the stereotypes and racism used in certain comics, while “Crime Queens” reprints stories from Crimes by Women, a supposed “true crime” series from Fox Feature Syndicate that began in 1948.

These are tough gals, often slinky in the “Dragon Lady” exotic danger mode, but modern readers might also be surprised by some of the weirder characters, such as the pair of con artists named Her Highness, an older woman who wears a suit and is quick with her fists, and the smooth Silk. Or He-She, a being split half male and half female who fought the underaged Crimebuster and his monkey Squeeks. Or the Figure, a Plastic Man villain who bemoans being “so beautiful that folks forget [she] was a genius at arithmetic at school!”

The women in the last, true-crime section have a different flavor, without the exoticism or grand schemes of their sisters. Their crimes are often small-scale but deadly, such as those committed by Belle, a “black widow” type who killed prospective husbands for their cash, or by Winsome Wanda and her poisoned fingernails. The most unusual is Madame Muscle, a wannabe carnival performer who goes from being talked into committing robbery to murdering her way into running a criminal gang (although hobo queen Mable, who raises an army of tramps and vagabonds, is a close second).

Since the book is in black and white, the vintage reprints can sometimes be a little murky to read, but no one is here for the artistic storytelling. Madrid’s opening analysis of the need for good villains is well worth reading. He highlights how the glamorous, rebellious female evildoers demonstrate freedom and power unavailable to “good” women without having to hide their identity or ignore their sexuality. (Although one might wonder if his explanation also helps justify enjoying images of women who sometimes wear outfits that would be considered skimpy even today.)

The biggest problem with the book is that you’ll likely want more, but these characters are obscure and hard to find. Since they rarely had their own comic titles, some only appeared once or a handful of times, facing off with the men who headlined the books.

But how can you not enjoy women with names like Madame Doom or Lady Serpent? Or not be fascinated by the whip-wielding Red Haired Kate or the pirate Skull Lady or Queen Tuana, jungle Amazon? Vixens, Vamps & Vipers is a terrific sampler of these ladies and their compatriots.