Transformer: The Deep Chemistry of Life and Death 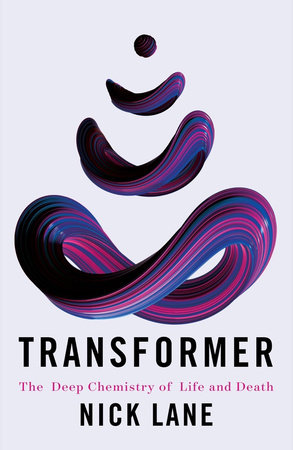 Form follows function; action precedes object. This seems to be the gist of the argument biochemist Nick Lane makes in his dense Transformer: The Deep Chemistry of Life and Death. He’s apparently offering a revolutionary theory on the origin of life and consciousness.

My assertions are tentative because most of the book is unintelligible to me. Here is a typical passage, taken from a page opened at random:

“[B]acteria capable of anoxygenic photosynthesis have a single photosystem, which is capable of either ATP synthesis (via a cyclic flow of electrons from chlorophyll back to chlorophyll, with the electrons energized by light) or CO2 fixation, by transferring electrons from a donor such as hydrogen sulfide (H2S) onto ferredoxin.”

If that’s as clear to your ears as a morning hello, have I got a book for you! Unfortunately, it’s not to me: The tour of the chem lab during my high-school orientation included an eyewash station to save your sight from an errant spray of acid and a furled blanket with which you could smother yourself in case you caught fire. I’ve given chemistry a wide berth ever since.

Yet Transformer is being marketed to laypeople, so it’s appropriate to get a non-chemist’s take. Well, here it is. Because of the author’s obvious enthusiasm, the writing is never dry, despite all the long words and formulas. For me, reading it was like listening to a friend excitedly unspool a story you can’t really follow. You endure it because the emotion is gripping and you can tell she really needs to share. In fact, at one point, Lane breathlessly announces a certain experiment “was so beautiful I have to tell you about it.”

That’s right: When he’s not spouting indecipherable technical language in support of his thesis, Lane is quite cozy with the reader. He refers to “bad-ass oxygen” and confers on parts of molecular diagrams names like “Mad-Eye Moody.” When discussing the role of chance in the creation of the earliest life, the author channels Clint Eastwood to remind us “you can’t always be lucky, punk”; slips into Star Wars speak to explain that a certain process structure “brings balance to the force, Padawan”; and answers four rhetorical questions, “Yes! Yes! Yes! Yes!”

Lane has come to believe that the structure of cells is less important than what goes on within them, an idea with both theoretical and practical implications. It challenges the accepted theory of life on Earth emerging from a “primordial soup” on the planet’s surface and instead shifts the genesis to undersea thermal vents. It replaces the buildup of genetic mutations as the cause of aging and cancer with the slowing of cellular activity. And it imagines consciousness as the humming electrical fields of cell membranes.

Lane is British and makes no concessions to American English. Experiments work “first go,” not first try. We fly in aeroplanes and put on jumpers instead of sweaters. And in the fall, perhaps we engage in a programme of maths or simply enjoy the tonne of colours in the trees.

Because biology classes don’t require emergency medical equipment, I recognize some of the book’s biological concepts. Plants convert carbon and water into carbohydrates through photosynthesis, throwing off oxygen in the process. Animals eat the carbohydrates and breathe the oxygen, and then our cells convert those products into energy and growth.

Lane’s foundation for his function-before-form theory seems to be that that cellular process — what’s known as the Krebs cycle — can run in both directions, meaning the cells of some animals are capable of building up materials, not just breaking them down. This somehow leads to the conclusion that these cells had metabolism before they contained genetic information.

Unlike most popular science books, this one is short on “wow factor” — information amazing enough to wake up the non-specialist nodding off amongst the molecules. But it does reveal that we’re each made of up “at least 30 trillion cells,” all of which go through “a billion metabolic reactions every second.” That means the cells of a man in his mid-50s like the book’s author have already gone through reactions numbering 10 to the 32nd power, “roughly a billion times the number of stars in the known universe.”

Even though nonscientists won’t be able to judge whether Lane makes a convincing case, he is periodically quite clear on his goals. Early on, he posits the essential question as “genes first or metabolism first? The thrust of this book is that energy is primal — energy flow shapes genetic information.” Later, he restates the proposition with added whimsy:

“Until now, biology has tended to study the materials that make up the instruments. The time has come to close our eyes and listen to the music.”

Lane seems firmly established in the scientific establishment — he’s a professor at University College London — but his book carries a whiff of the heretic. He’s glad that “the simplistic notion that genes control metabolism is beginning to unravel” but frustrated that “the idea that mutations cause cancer remains the dominant paradigm” — a paradigm that, to his mind, is “too close to dogma.” He also states plainly: “I want to turn the standard view upside down.”

In a footnote, the author confides that “probably only a tenth of what I wanted to write about actually made it into the book.” On behalf of humanities majors everywhere, I can only say thank goodness.

The Most Dangerous Man in America: The Making of Douglas MacArthur

A riveting, accessible biography of a complex character from American history.