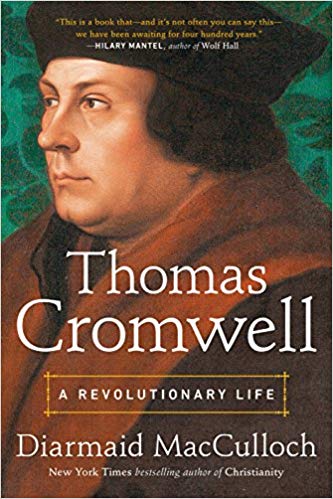 Thomas Cromwell (c. 1485-1540) has earned newfound celebrity in recent years. Hilary Mantel made this Tudor government official the lead character in two of her novels — Wolf Hall (2009) and Bring Up the Bodies (2012) — each of which won the Man Booker Prize. Both were also adapted for TV in a single BBC serial in 2015.

Novelist Mantel admittedly takes artistic liberties in her Cromwell saga. Now, with a nod to her, scholar Diarmaid MacCulloch has crafted a monumental portrait that sticks steadfastly to the actual circumstances of Cromwell’s life. His biography is a massive and comprehensive picture of the man who the great Tudor historian (and MacCulloch mentor) G.R. Elton once called “unbiographable.”

MacCulloch proves his mentor quite wrong. He traces Cromwell’s climb up the ladder of influence, beginning with his origins as the son of a village tradesman and an adventurous youth in Italy. From beginning to end, MacCulloch unearths stray facts about his subject’s activities with exhaustive precision, mining a dazzling range of extant sources.

This is a big book in all senses of the word. Brilliant throughout, it will set a new standard for scholarship in the study of Henry VIII’s court. But if you’re a seriously casual (read, non-academic) reader, be warned: Though written with elegance and verve and packed densely with fresh revelations, this is more of a “collectible” volume, probably better suited for dipping and index-browsing than a stubborn read-through.

MacCulloch focuses most intensively on the period between 1525 and 1540. In the mid-1520s, we find Cromwell at the near periphery of court life as adviser and friend to Thomas Cardinal Wolsey, Henry’s all-powerful chief minister. After Wolsey’s fall from grace in 1529 — stage-managed by Anne Boleyn — Cromwell, remarkably, keeps his footing.

By dint of intelligence and administrative talent — and likely a wealth of what today we call “interpersonal” skills — Cromwell begins a steady ascent to the pinnacle of Tudor government. Early in his climb, he becomes a trusted confidant of the king, and he wins allies in Henry’s immediate circle, notably Archbishop Thomas Cranmer, a top advisor and later Lord Chamberlain.

In the nasty swamp of the Tudor court, Cromwell also accrues his share of deadly enemies. Cromwell’s world in the 1530s was tempest-tossed, owing primarily to two royal motivations: one, Henry’s recurrent preoccupation with fathering a healthy male heir and, two, the king’s compulsion to drum up enormous sums from his people, mostly to fortify and defend the realm from (possible) continental invaders.

The first motivation spawned Henry’s notorious skein of marriages; the second, his upending of the British system of taxation and dissolution of the monasteries — effectively looting their vast lands and treasure.

These gambits reverberated all through the inextricably entwined tendrils of English religion, public policy, and public opinion. MacCulloch demonstrates authoritatively how Cromwell sat squarely in the driver’s seat here, reviled by rivals among the nobility, and despised by many average citizens, too.

Later, Cromwell’s leading role in the selection of Anne of Cleves, Henry’s fourth and only non-English wife, is the stratagem that tips the balance against him. Less than captivated by Anne’s appearance when she disembarks in England, Henry marries her, anyway.

Months in, the king confides to Cromwell that he has been unable to perform in the marital bed. When whispered rumors of this get out at court, the mortified Henry blames Cromwell for the leak. He puts both his senior minister and the now-erstwhile queen aside — the latter amicably, the former, not so much. Cromwell is beheaded.

MacCulloch has done an exhaustive job here, mining contemporary and near-contemporary printed sources and manuscripts, letters, and reports from diplomatic luminaries to their superiors on the continent, including the pope. He also relies on hundreds of primary and secondary sources touching on his subject’s life, accomplishments, and shortcomings, even in the absence of most of Cromwell’s outgoing correspondence — likely destroyed by supporters protecting his posthumous reputation.

From this decidedly rich corpus, Diarmaid MacCulloch has produced a stunning chronicle. Thomas Cromwell: A Revolutionary Life is crafted with elegant style; it’s as witty and observant as the work of any historian writing today. And it will prove an invaluable resource for scholars and serious devotees of 16th-century English history for decades to come.