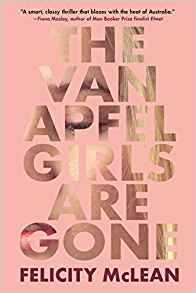 Tikka Malloy is 11 the summer it happens, three years younger than her sister, Laura, who is the same age as the oldest of the Van Apfel girls. The Van Apfels are the Malloys’ neighbors and best friends, living on a cul-de-sac where there are no fences to obstruct views. Yet no one sees what happens.

Their vanishing haunts Tikka. Twenty years later, she returns to her hometown in Australia from an unfulfilling life in Baltimore to visit her now ailing sister. She confronts the circumstances of the disappearance and her unresolved feelings about it. Conflicted neighbors, conspiratorial friends, an abusive father, and a new teacher with a dubious background fuel the mystery.

The Van Apfel Girls Are Gone is Aussie writer Felicity McLean’s first novel. One would expect the author, who has a background in journalism and biography, to be particularly good at detailing the who, what, where, and when of a mysterious disappearance. She is.

The book gives a nod to detective mysteries and specifically to the prolific crime novelist Laura Lippman. Tikka lives in Baltimore, Lippman’s real-life beat; Tikka’s sister is named Laura; and the names of two of the missing girls, Cordelia and Ruth, are names mentioned in Lippman’s What the Dead Know. But it’s much more than that.

Rather than a lurid police procedural or a reprise of salacious details, the novel examines the motives, feelings, intentions, and memories of the people around the Van Apfels, the ones left to deal with the shock and the grief and the self-recriminations. How did the girls disappear? Why did the adults act as they did? Why did Laura and Tikka not reveal what they knew? Why is Tikka obsessed with the incident?

Tikka at 11 is straightforward, dogged, and clever. Her dialogue is written in a voice that sounds true for the child and, later, the woman she becomes. “I was good at remembering,” she says. “I never forgot when it was important.”

It makes sense that during the ensuing years she often thinks she sees Cordie, the middle Van Apfel sister, as a grown woman waiting for an elevator or in a street crowd because the disappearance remains so close to her consciousness.

Cordie is the lynchpin of the story, 13 when she vanishes. She is the brave sister, the daring one, the one to court openly the anger of her sanctimonious, arbitrary father. She is so “singular” that she doesn’t seem “to need to touch anyone else.” Says Tikka of the girl, “She knew more, she sensed more.”

As children, Laura and Tikka are the daily companions of the Van Apfels, living on Macedon Close. Hannah and Laura, older and more secretive, are in the same grade. Cordie is younger in years but has a budding sensuality that belies her age. She spends more time with the older girls. Tikka longs to be in that circle but most often is left to follow along behind with 7-year-old Ruth.

All the girls spend the sweltering days swimming in the Van Apfels’ pool, lounging on the lawn in their cossies (swimsuits), and eating Bubble O’Bill (a frozen treat) to cool off. McLean paints languid scenes of summer in Australia. Laughing kookaburras and colorful lorikeets dot the sky. The air is scented by jacarandas and befouled by mangroves.

The apparent tranquility on Macedon Close has a troubling undercurrent, however. There are glimpses of abuse in the Van Apfel home. Tikka and Laura witness Mr. Van Apfel slap Ruth during Bible study for giving the wrong answer. The new male teacher for Cordie’s class seems to be wherever Cordie is. There are rumors he spent time in jail.

It is 1992 when the girls disappear. The news is dominated by the true story of Lindy Chamberlain, the woman wrongly accused of killing her infant daughter when it is more likely a dingo snatched the baby. The Chamberlain case whispers a warning: Do not disregard the obvious. But the obvious, like the stench of the mangroves that only Tikka notices, is too unpleasant to confront.

The adult Tikka learns that both a nosy neighbor and her own father knew something wasn’t right in the Van Apfel house. Mr. Malloy also knew about the suspicious male teacher. We learn that Hannah and Cordie wanted to run away, that Mr. Van Apfel knew it, and that Laura and Tikka were willing to help them.

The story of the missing Van Apfel girls examines where responsibility lies when one is caught between doubt and certainty. Or, as Tikka reflects: “I was responsible and not guilty. I was both things, and neither. Like the valley: a thing and a void.”

It is a conclusion without finality.

By Rachel B. Glaser