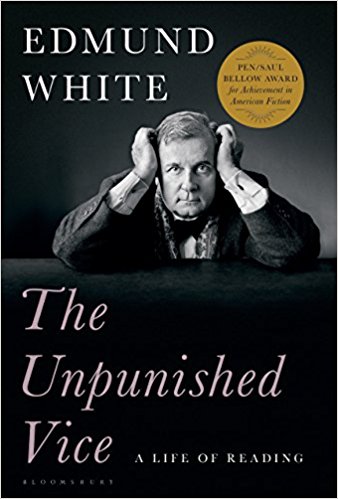 Edmund White sets the theme of The Unpunished Vice in its opening sentence: “Reading is at once a lonely and an intensely sociable act.” An account of White’s engagements with a host of authors — classical modernists and contemporary peers — this fine memoir offers a paean to reading: “a hobby that never grows stale — and an unpunished vice.”

The Unpublished Vice comprises 17 numbered “chapters” (though some were previously published as titled essays). The strategy gains two advantages for White: One, it emphasizes “remembering” as a continuous process over the “remembered” as a discontinuous series of events; and two, it allows often epigrammatic opening sentences, a favored gambit, to replace gestural titles.

A chapter beginning with the simple sentence, “My lodestar was always Paris,” for example, eases from a set-piece on literary life on the Île Saint-Louis to insightful mini-essays on Colette and Cocteau — the latter White’s avatar twice over: “Cocteau was a master of the autobiographical essay,” and “Cocteau and [Jean] Marais were the first well-known gay couple in the world.”

By way of contrast, the opening sentence of the penultimate chapter represents a different signature — over-the-top delivery of an eminently sensible opinion: “The greatest novel in all literature is Anna Karenina.” White reports having read Anna Karenina “ten times, though I’m none the wiser for it.” Its “classic, inevitable topography of love,” nonetheless, is another lodestar.

These opinions — unabashedly opinionated opinions — are White’s stock in trade. They can be eccentric — Nabokov, Balanchine, and Stravinsky are “the triumvirate of artistic genius…the three most important talents of the twentieth century” — or baffling: “Few writers praise their contemporaries.” Usually thoughtful, they always provoke thought.

As a memoir, The Unpunished Vice glances at many of White’s works — particularly Forgetting Elena, his first published novel. As a memoir of writer as reader, however, it focuses on works by others. White links his reading and writing with a typically wry line: “I like to read great books not because I’m hoping to imitate them but because I want to remind myself how good you have to be to be any good at all.”

White’s A-list includes Vladimir Nabokov, whom he discusses at length; Jean Genet, about whom he wrote a biography; Andre Gide, “the tutelary god of my adolescence”; and, aptly, Marcel Proust, capo dei capi, who “has been a part of my life all my life, and I have nothing new to say about him.”

The multitude of others, whether canonical or obscure, earn expert readings and sharp aperçus: “Nearly everything about Curzio Malaparte…was bogus, starting with his name.” The many fashionable literary theorists invoked, by contrast, receive glancing asides that mainly seem to preen for the general reader while establishing street cred with the professional.

White’s gimlet-eyed fix on writing style is a different matter. Against “the sort of long-winded obfuscation endemic to American campuses,” he offers an improbable but very apt exemplar in Arthur Waley, translator of The Tale of Genji, who “did for Lady Murasaki…what Scott Moncrieff did for Proust. These Englishmen may have made mistakes, but they naturalized each book and turned it into an English classic.”

White’s own celebrated style has such finesse that it routinely invests even commonplaces with elegance: “We never read the same book twice. But each time it is our book, locked in our innermost heart as we move and change through time.”

Sometimes, though, to adapt Freud’s apocryphal quip on his cigar, a commonplace is just a commonplace: “My point is that writers are inspired by earlier books and by earlier literary techniques.”

A septuagenarian, “the age of everyone’s grandfather,” White not surprisingly teases the themes of aging and superannuation — particularly that of writers. If fortunate (and obliquely Eliotic), “a writer can shore up an eroding coastline for a decade or two.” If not, he can end up a persona more interesting than his books, “amusingly historical, like Quentin Crisp.”

White’s homosexuality, however, eclipses aging. What Henry James would call the donnée, it provides at once the book’s thematic ground and perspectival slant. Whether explicit or implicit, everything here rests on White’s sexuality and is seen through it. Since this is a memoir, and not a treatise, White’s identity and experience remain the focus, but they also bristle with extension.

“Miserable” at boarding school, for example, White endured his self-defined failure “to be normal, athletic, heterosexual, handsome, and popular.” And smothered at home, he suffered his analyst mother’s ongoing efforts to cure his “inappropriate object choices.”

As a result, White projected abjection into artistic failure: “My worst fear about homosexuality was not that it would stigmatize me as a person but that it would limit me as a novelist.”

Reading lifted him, offering both sight and insight. “Gide’s journals were a revelation,” he says. “I was enlightened by [his] way of mentioning his sexuality in passing.” And Christopher Isherwood’s novels were a tonic: When most gay novels “provided an etiology and apology for the regrettable aberration,” Isherwood instead “plunged the reader directly into [gay] experience.” With these models, White grew from suppressed homosexual reader to unfettered gay writer.

White, of course, unfolds his private growth through public time, extending its import: the 1950s, when he “couldn’t name a single great gay writer” or his equally young artist friends “a single modern gay artist”; the late 1970s, when “it was thrilling to be a gay writer,” when “we first broke out”; and the present, when “gay fiction and poetry have entered the foreground once again.” If White’s sexual history is his own, its backdrop is everyone’s.

Midway through this memoir, White drops a remark that a lesser artist would have showcased in closing: “The writer has the last laugh; even if (as in my case) he is funny at his own expense and self-abnegating, his is still the governing point of view.”

Edmund White has too fine an ear for that, and instead closes The Unpunished Vice on a note neither facetious, facile, nor flip — on a promise made and kept: “Silent solitary reading (if the book is good) is the best conversation.”

Charles Caramello is a professor of English at the University of Maryland. His books include Performance in Postmodern Culture; Silverless Mirrors: Book, Self, and Postmodern American Fiction; and Henry James, Gertrude Stein, and the Biographical Act. He is currently completing a collection of essays, Riding Late: Essays on Horsemanship, Cavalry, and the Great War.