The Spy Who Couldn’t Spell: A Dyslexic Traitor, an Unbreakable Code, and the FBI’s Hunt for America’s Stolen Secrets 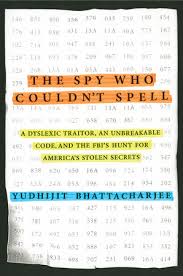 This unremittingly engrossing book delivers a real-life spy narrative that — not unlike many of its fictional counterparts — breaks from the gate with a stunningly urgent intelligence bombshell.

In this case, it’s a mysterious trio of letters from an unknown sender to Libyan intelligence officials. The material, partially encoded and accompanied by the keys to decipher it, has been intercepted by a covert FBI informant at the Libyan consulate in New York.

The letters in question, snatched surreptitiously in December 2000, also contain stark evidence of the unknown sender’s bona fides in the form of Top Secret satellite imagery hinting at the extent of our government’s capabilities to penetrate the air defenses of the Libyan regime. Deciphered, the first few lines in the cover letter read:

“I am a Middle East North African analyst for the Central Intelligence Agency. I am willing to commit espionage against the U.S….I have a top secret clearance and have access to documents of all of the U.S. intelligence agencies, National Security Agency (NSA), Defense Intelligence Agency (DIA), Central Command (CENTCOM) as well as smaller agencies.”

This chillingly anonymous self-introduction ushers in the hero at the center of the saga: FBI special agent and counter-intelligence specialist Steven Carr. Carr takes charge of the details of the investigation and assembles an expert circle from throughout the intelligence community to root out the breach. The potential national security threat here, of course, is serious enough; but remember, this was 2000, and Libya’s Gaddafi still loomed large as a sponsor of global terrorism.

Carr’s team has little to go on in the early days of the spy hunt. In the first place, they don’t know who the traitor is, in which agency he or she works, and what has motivated this attempt at treason. From hints in his initial approach to Libya, the team deduces that he has a family, is cleared at a high level, and is likely about to retire from military service.

This is a slim thread to follow, but one other telling sliver of evidence stands out: the plaintext encryption key the would-be secret agent has supplied to the Libyans is studded with misspellings of entirely common words.

A psychiatrist on the FBI team identifies these miscues as typical of dyslexia, the disorder characterized by difficulty in recognizing words and symbols but not affecting intelligence. Dyslexic individuals may have trouble reading and doing math but may excel in skills like pattern recognition and encryption/decryption.

Armed with these insights, the team homes in on a tentative suspect: Brian Patrick Regan, an Air Force master sergeant and image analyst assigned to the National Reconnaissance Office (NRO), that most secret of spy agencies charged with gathering and interpreting satellite imagery.

Regan seems an unlikely suspect, standoffish, overweight, and undistinguished in on-the-job performance, a high-school graduate dogged throughout life by other folks’ perceptions of him as slow and doltish. In short, Brian Regan is exactly the sort of anonymous cog in the machine who can easily hide in plain sight.

But merely harboring strong suspicions of the traitor’s identity falls far short of closing the case. And so the chase begins, its urgency spurred on by up-until-then undetected traces Regan has left in Intelink, the overarching information network of the intelligence community. Dismayed when they calculate that Regan’s downloads tally in the tens of thousands — collectively a source of immense damage to the nation — the team sets out to surveil Regan in and out of the office.

The final section of The Spy Who Couldn’t Spell details the government’s attempt to keep Regan in their sights during his frequent meanderings throughout Virginia and Maryland, to preclude any further national-security damage by finding his prodigious stash of stolen documents, and to build a capital case against him. This latter mission is complicated, legally speaking, by the feds’ unwillingness to burn its covert operative at the Libyan consulate.

The government, forced to show its hand prematurely by apprehending Regan in the cabin of a Lufthansa jet about to take off for Europe, ultimately gets its conviction, but only for a life sentence, not the death penalty it hoped for. And Regan’s stash of secret papers is only unearthed when the feds threaten to charge Regan’s wife with obstruction.

As this somewhat breakneck summary indicates, Bhattacharjee’s narrative is a fast-moving one. Somewhat surprisingly, he writes in a spare, unadorned style that doesn’t detract from the pace of the story. Even so, the author doesn’t neglect the color and background of his tale, and his depiction of Regan’s teenage years, his marriage, and his ham-fisted attempt to soak the Libyan government for $13 million add depth to the tale. What’s more, the author’s background as a science writer means his descriptions of complex encryption practices go down easily.

For this reviewer, though, there’s a troubling undertone in this tale, however harmlessly it has turned out. It’s a little disturbing to realize how easily — and how often — Regan surfed Intelink, downloaded tens of thousands of pages, printed them onsite, and then physically smuggled them out of the NRO. But surely we’ve shut the door on these activities.

And yet today, long after Regan’s ineffectual but potentially catastrophic hijinks, we know about another intelligence theft, demonstrably more dangerous and at least equally voluminous, by Edward Snowden, a rookie contractor-analyst at the NSA. And how about Harold Martin, another contractor, reportedly absconding with and stashing thousands of classified records in his Glen Burnie townhouse to use in his Ph.D. dissertation? Plus ca change.