The Secret of Clouds: A Novel

An exquisite story about how teachers and pupils enhance one another’s lives. 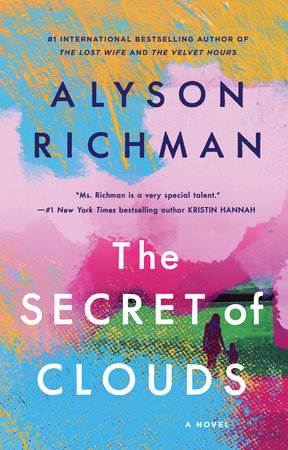 The spellbinding The Secret of Clouds balances timelines and points of view. One narrative follows a young Ukrainian couple living in Kiev during the Chernobyl nuclear catastrophe in 1986. Katya and Sasha Kransky, one a promising ballerina and the other a science graduate student, are rattled by the calamity and their government’s reaction to it. After an injury severely handicaps Katya’s chances for a ballet career, they find an opportunity to relocate to the United States, settling in a small town on Long Island.

While the novel’s prologue establishes Katya and Sasha’s crumbling world of Chernobyl, most of the book takes us into the Long Island world of the Topper family, where the story is mainly narrated by Maggie Topper.

Thus, author Alyson Richman effectively shuffles between past and present, between two worlds, and between two starkly different female characters. The inherent contrast in these pairings expresses itself through a profound interaction: In her second year of teaching in the Franklin Intermediate School, Maggie meets Yuri Kransky and his parents, Katya and Sasha.

Yuri suffers from a heart defect. He has little stamina and is unable to participate in conventional classroom life. Maggie is asked to teach him one-on-one at his home. As one who idealizes the teaching profession and aspires to its worthiest goals, she cannot refuse.

As one would expect from such a setup, Maggie’s devotion to Yuri becomes a situation in which she is as much the learner as the teacher.

The immigrant Kransky family lives in relative isolation; Maggie, however, interacts with her family, New York area friends, other teachers, and a full complement of students. She also has a boyfriend, Bill, with whom she shares a modest, but distinctive, home.

Through Maggie’s portrait of Yuri’s ups and downs, intelligence, and courage, Richman brings him fully to life. He has a damaged heart but boundless “heart.” Though Katya is understandably super-protective of him and constantly on edge, Maggie convinces her to give Yuri carefully monitored exposure to the classroom and fellow students.

Maggie’s influence on Yuri is balanced by his influence on her, and Richman handles Maggie’s growth as a teacher faultlessly. If there is one element of the book that stands out, it is the respect the author shows for the teaching process and the value of skilled, committed educators. The portrait of Maggie’s colleagues provides a cross-section of teacherly types, but what’s going on in the Franklin school community is good news.

Several adjustments shape the key characters’ lives. One of these is Maggie’s realization that her relationship with Bill is approaching a dead end. This awareness results, in part, from his hostility toward the extent to which Yuri dominates Maggie’s life. Then there is the reality that they never had much in common to begin with.

When Yuri’s vulnerabilities seem to lessen, the risks he is willing to take for a fuller life — prompted by Maggie’s enthusiasm though still only reluctantly granted by Katya — present readers with the warring alternatives of hope and fear. When a physician’s advice arrives that heart surgery is a necessity, the tension and weight of measuring and assigning responsibility for its potential outcome becomes unbearable.

Will Yuri, now 12, survive? If so, in what condition and with what assurance of a healthy future? How will Katya and Sasha respond to the various possibilities? If things go wrong, will Maggie second-guess her passion for encouraging his path to normalcy?

Readers will need to sort through these carefully orchestrated questions. Richman’s great strength in designing the emotional ebb and flow of her engaging narrative should win accolades and a heap of new readers.