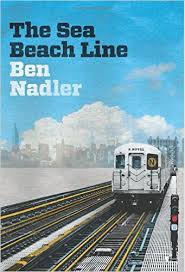 Ben Nadler’s new novel, The Sea Beach Line, is astonishingly powerful, thoughtful, and more than a bit troubling, but it is not to be missed. In it, Isaac (“Izzy”) Edel, cast out of Oberlin College for drug use, determines to clean up his act and discover whether his father is dead or alive.

Izzy has some pleasant childhood memories of his father, but since his parents’ divorce and his mother’s remarriage, he has had little contact with his father. Polish-born Alojzy (“Al”), who had fought in the Israel Defense Forces, made little effort to have Izzy in his life, perhaps for his son’s own good.

Izzy cannot move forward without finding out about Al and, if possible, getting in touch with him. His actions are triggered by a mysterious card from his father and a note to his mother that arrive at the home of his mother and stepfather in New Mexico, where Izzy has been living following his university disgrace. Returning to neighborhoods in Brooklyn and Manhattan, Izzy begins an arduous journey, both physical and spiritual, to find his father, or traces of his father, in order to find himself.

Following the few leads he has, mostly from suspicious characters who knew Al, he finds the storage locker out of which his father ran his Manhattan bookselling business. Soon enough, Izzy steps into his father’s footprint, taking over the business, making the storage space his home, and continuing his investigation.

Izzy works hard, networks, develops friendships on the street, and soon becomes a familiar presence among the Fourth Street tribe of book vendors. He takes every opportunity to find information about Al, and he becomes absorbed in the nature of his father’s life as remembered by others and both fantasized about and echoed by himself.

He discovers a collection of sketches drawn by his father. He meets an artist named Goldov, who had written the note to Izzy’s mother. Goldov runs a gallery/museum specializing in the works of another artist, R. Galuth.

One of the paintings by Galuth is of a woman who bears a strong likeness to a shy, young Jewish woman named Rayna whom Izzy meets on the street. She seems disoriented, and it turns out she is a runaway. Rayna cautiously allows Izzy to befriend her and shelter her. A strong relationship grows. They live and work together in the storage locker. It is clear Rayna has been abused in some way, but she won’t talk about it — or about her family.

The glory of this book is in its allusive texture. Izzy, our narrator, is widely read in Jewish scriptures and midrash. His language is filled with references to such reading, and this technique sets his adventures and decisions into a rich context of religious lore and values. Similarly, stories Rayna shares, especially a version of the Purim story, work to the same end. We are all hidden within and revealed by the tales we tell — and retell.

Izzy’s constantly changing book inventory is a register of overlapping slices of American culture mingled with Jewish scholarship. As he masters the business, he learns what kinds of books are desired by buyers at different stages of their lives and during different seasons. Writers go in and out of favor.

Ben Nadler has done a marvelous job with his portrait of the street vendor’s life. He’s been there, and it shows. He doesn’t just provide vivid, authentic details, he shapes their presentation so as to let readers interpret the meaning of these details. Like most good writers, he shows a lot, tells a little, and lets us do the rest.

Izzy’s world also interacts with criminal enterprises, and Izzy himself — at first innocently asking for and giving favors — is drawn into it. As he becomes aware of the traps that have been set for him, he alternates between a kind of proud recklessness and a sickening fear. It all has something to do with being like Al, measuring up to Al, making Al proud of him, being loyal to Al, sacrificing himself for, or being sacrificed by Al.

And so the last of the book’s three multichaptered sections is titled “The Binding of Isaac,” in which Nadler provides a captivating reading of the classic and controversial Old Testament episode about Abraham and his second son. Of course, it is Isaac Edel’s life that is illuminated in this meditation.

Eventually, Rayna is stolen away (rescued?) from the storage locker home and returned to her powerful father. Members of a criminal family, several of whom were Al’s associates, have betrayed the young couple.

Is a counter-rescue of Rayna possible? Desirable? Is Al alive? Why did Al draw several sketches of a dead soldier? Who is the woman in Galuth’s painting? Can Izzy make some kind of peace with whatever he has inherited from his father? The answers to these questions are wrapped in the intricate packaging of Nadler’s fascinating, kaleidoscopic thriller.

What Sammy Knew: A Novel