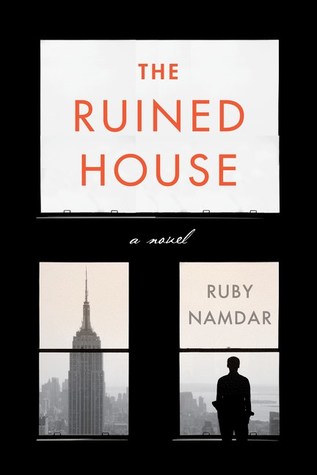 Some books are so spectacularly original, so far beyond the boundaries of any reader’s expectations, and so challenging that they establish a new point of reference for any further discussions of literary achievement.

Ruby Namdar’s The Ruined House, set at the dawn of the 21st century, explores the givens of a cataclysmic era that may become a period of tumultuous cleansing. Though centered on the physical, emotional, mental, and spiritual disintegration of a successful, middle-aged college professor, it fully engages the new American century’s self-masking: its adulation of elites and its confusion of cultural values.

Andrew P. Cohen, an accomplished and proud secular Jew, has tripped over the scales of hubris and found himself to be a foul beast. His aura of polite self-congratulation has become contaminated and slowly begins to smother him. His many faults, the recognition of which he has artfully hidden from himself for decades, are in the process of being revealed.

The selfishness with which he ended his marriage is exposed to him. The comfort and security he felt in his academic achievements, the physical attractiveness and health that he nurtured and in which he delighted, and his assumption of fully controlling his always upward-bound destiny are most painfully stripped away.

This material, represented in the graphic style of the original manuscripts, focuses on the preparation of the Temple’s high priest for performing his duties during the seven days leading to Yom Kippur, the holiest day in the Jewish calendar. These duties are largely rituals of purification, but also include various kinds of sacrifices — offerings to God.

Inner and outer cleansing of the self and the temple are described, along with a number of sacred objects like fire pans and candelabras. The strange ceremonial practice of purifying holy places by sprinkling them with blood is included.

Seven sections drawn from this running narrative/commentary serve as the dividers marking the seven chapters of Namdar’s book. The yearning for divine approval registered in the priest’s actions seems to magically journey through time and space, ushering in Cohen’s self-loathing. The images in these passages also vividly reveal themselves in Cohen’s world and Cohen’s awareness, however fleetingly.

Of course, Cohen bears the title of priest. That’s what his last name means. However, he has not taken on the mantle of a Kohane’s responsibilities. If he were truly a descendent of the Kohanim, his behavior until this invasion for the distant past would have disgraced his lineage.

It is hard to determine to what extent author Namdar wishes his readers to engage with these seven intriguing passages, but clearly they are not meant to be merely ornamental digressions. Readers must be open to the relevance of this unexpected material.

As Andy Cohen falls from the grace of his comfortable, prestigious university position, it is as though he has worshiped false gods. He had taken his gifts for granted by deluding himself into thinking that he had used them well.

His behavior toward his ex-wife, his daughters, his students and colleagues, and his girlfriend is ultimately always Andy-centric. Namdar is remarkable at painting Cohen’s dawning awareness of his ravenous ego, as well as at representing the false promises Cohen makes to himself to change his ways.

Namdar alludes to (and briefly quotes from) Yeats’ The Second Coming and, through this reference, reminds us, if not Cohen, that the professor is only a representative figure in a doomed civilization. For Cohen, the phrase “Things fall apart, the centre cannot hold” is only about him.

The many scenes of disorientation, gluttony, perverse visions, panic, and depletion in the novel are gorgeously crafted, as are those that develop the several boldly conceived characters in this convention-bursting novel. These include Cohen’s insightful older daughter, Rachel, his shallow friend the university president, and his clever, complicated girlfriend, Ann Lee.

Namdar’s sketches of the various New York neighborhoods in which scenes are set are in themselves small masterpieces. So, too, are his descriptions of the more confined settings: the restaurants, the apartments, the offices, and the interiors of universities.

This effort must have been an enormous challenge for translator Hillel Halkin, whose contribution to Namdar’s opportunity to amaze the English language audience is immeasurable.

Ruby Namdar has set himself enormous challenges, met them marvelously, and left this reader gasping for breath.

A deeply evocative collection that's both disturbing and brilliant.