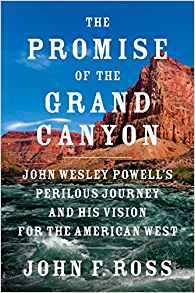 John Wesley Powell faced fierce opposition, venomous back-stabbing, and the unremitting stress of not knowing what lay ahead the next day or even hour. And that was as a federal bureaucrat, maneuvering Washington, DC, as director of the U.S. Geological Survey (USGS) in the 1880s and 1890s.

Oh, and he fought in the Battle of Shiloh, losing his right arm in one of the Civil War’s bloodiest fights, and led a months-long, near-deadly expedition through the uncharted rapids and falls leading to what he named the Grand Canyon.

Biography helps pull together disparate elements of the past that created a whole person and her or his accomplishments. John F. Ross’ biography of Powell does this well. Powell was born in 1834 into one of the multitudes of families who left behind the East with no idea of what lay ahead; he died in the first years of the 20th century, having played a leading role in charting what that vast expanse really was.

Wes (as Ross refers to him as a youth; later in the book, he is “Powell” or “the Major”) shouldered immense family responsibilities while his Methodist minister-father went on preaching circuits and sought new fields to sow, literally and spiritually. The boy learned however he could, reading while he worked, patching together bits of schooling, and finding mentors.

His father named him for the founder of Methodism, but John Wesley Powell chose a different path: science. He became a self-taught expert on mollusks (who knew the interior U.S. has so many species?), which brought him some stature in natural-history circles, despite lacking a college degree.

Perhaps if not for the Civil War, his early ambition to teach at a small Midwestern college would have sufficed. An early recruit, he served under Ulysses Grant, whom he admired and who came to depend on Powell. A gunshot wound resulted in amputation of his right arm; the nerve endings inside the stump caused great pain for the rest of his life. By the war’s end, he had an “unstoppable consuming energy…[A]n iron will toward self-healing along with other deep currents were pressing him with far greater urgency and energies.”

He returned to Illinois with expanded horizons. In 1867, he secured public money to create a curator’s position with the Illinois Natural History Society. He then proposed the society sponsor a specimen-collecting trip out West. Of course, he was appointed both curator and collector. His intrepid wife, Emma, accompanied him.

Thus began Powell’s time in the West. From the start, he reached out both to Westerners who knew the land and to people in the East, such as Smithsonian secretary Joseph Henry, who knew about influence and connections.

The author’s own outdoor experience serves him well in describing Powell’s expeditions. After several mountain ascents, Powell eyed the most daring trip of all: descending from the headwaters of the Green and Colorado rivers to the then-unknown canyonland, “the final — and strangest — piece in the American jigsaw puzzle left by nearly a century of continental American exploration.”

Powell’s well-laid plans for scientific exploration gave way to a struggle for survival, with boats battered, food lost, and nerves nearly broken. In an unexpected twist, the press (inaccurately) picked up on the trip. By the time the team emerged — bedraggled, hungry, having lost several expedition members and all their equipment — their story captured the public’s imagination.

In his travels (including a less harrowing but cartographically more successful retracing of the river trip), Powell thought deeply about what he saw. He was not alone. The final third of The Promise of the Grand Canyon describes other surveyors and their supporters, who had competing visions about the future of western development; as Ross noted, “a contest over the nation’s very soul.”

Powell wrote, spoke, and maneuvered to advocate for science-based policy; specifically, that the region’s aridity places limits on development. Surprise — it was not a message that many politicians and businessmen wanted to heed.

The advance copy I read was slim on references and bibliography; not that I question Ross’ knowledge, but I would have appreciated more information for my own future delving. I also missed hearing about wife Emma, who largely drops out of view in the last half of the book despite being actively involved in his earlier work. Did she help him figure out how to handle his opponents and craft his case?

In the long run, Ross argues, Powell’s role within the government had a longer-term impact than his earlier, more publicized adventures. When I told a USGS retiree that I was reading Powell’s biography, her eyes brightened. “He’s one of my heroes!” she exclaimed.

In his biography of Powell, Ross reminds us of the potential nobility of public service and how government officials who stay true to science are, indeed, heroic.

Paula Tarnapol Whitacre is author of the biography A Civil Life in an Uncivil Time: Julia Wilbur’s Struggle for Purpose (Potomac Books, 2017) about a social reformer in Alexandria, VA, during the Civil War and Washington, DC, during Reconstruction and the Gilded Age. Her website is www.paulawhitacre.com.