The Porcelain Thief: Searching the Middle Kingdom for Buried China

While digging for the antiques hidden by his great-great-grandfather, the author explores the history, food, and culture of his ancestral home. 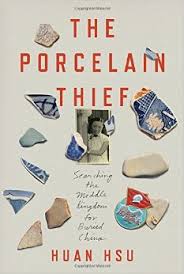 Some boys actually do it: dig their way to China. From the time he was small, Huan Hsu had heard about the day in 1938 that his great-great-grandfather Liu Feng Shu buried the family’s antique porcelain in the yard of the family compound — only seconds before the family fled the advancing Japanese.

According to the story, his ancestor stowed in a gigantic hole antique furniture, magnificent scrolls, and scores of exquisite porcelain vases, decorative jars and tea sets — some of them dating back hundreds of years to the Ming Dynasty. In 2008, Hsu, a Salt Lake City boy, set out for China to dig up the family trove.

Not only is The Porcelain Thief a tantalizing mystery — will he find the treasure, or will it be a wild goose chase? — but it is an unearthing of various kinds of booty for the reader: a riveting lesson in Chinese history; a fascinating story of porcelain and its prominent place in the development of China; a gastronomic tour; a vivid and complex portrait of contemporary Chinese culture and the texture of modern life in the world’s largest country; and a group portrait of an extended, sprawling, fascinatingly eccentric Chinese family. Moreover, the story is all told through the lens of an ABC, or an American Born Chinese. And not just any old ABC, but one with attitude.

This memoir is chock-a-block with honest and baldly portrayed human foible, pride and shenanigan, and this is one of its charming features. Our fearless excavator is not afraid to reveal ignorance, resentfulness, selfishness, or smugness in himself or in others. For instance, here’s his recollection of his grandmother’s funeral: “the pastor spent about thirty minutes yammering about his personal conversion story, nothing to do with my grandmother’s life, while I fantasized about pushing him down the hill.”

Hsu’s adventure begins in high dudgeon. After considering options for how he can manage to stay in China for an excavation he suspects will take him months to arrange and carry out, he decides to plead a job from his Uncle Richard, an astronomically successful entrepreneur whose high-tech company in Shanghai had an initial public offering larger than Google’s on the New York Stock Exchange. His richer-than-God uncle does grant him a job, but not without letting Hsu know that he doubts the shiftless writer nephew’s right to exist.

A cousin, two years his senior, with whom Huan is lined up to live upon arrival, extends a similar welcome. “The first thing Andrew said to me was ‘That long hair makes it seem like you’re hiding something, like a physical deformity.’” Due to Hsu’s essentially blithe spirit, the tale is refreshing, delightful, rompish, and delivers, via its no-holds-barred honesty, the deepest message of all: we human beings are an obstreperous lot, no matter which country we happen to have popped up in.

Hsu assembles the jigsaw pieces of Chinese history into a coherent picture with expertise and precision, turning its fascinating chaos into a comprehensible story. In interviews with Chinese people all over the map, he explores the array of ways that historical forces toy with the lives of individuals.

We have all heard about the forced removal of educated Chinese to rural re-education camps during the Cultural Revolution, but the accounts here are indelible. Fang Zhen Zhi, one of Hsu’s most amazing interviewees, is a scientist who helped develop China’s nuclear weapons program. During the Cultural Revolution, the Red Guards would sometimes tie his hands behind him and raise him by the arms in what they called the “flying a jet” position.

Fang, who grew up in a straw hut, however, denies feeling any anger toward the government. “All those years you couldn’t say anything,” he recalls. “They made the rules, and fighting wouldn’t get you anywhere. You sometimes run into unpleasant things, but what was the use of worrying?”

With a fatefulness and an astonishing optimism common among Hsu’s interviewees, Fang concludes, “It sounds bad to be under guard, right? But there was something good: you didn’t get to commit suicide.” Another interviewee tortured during the Cultural Revolution told Hsu he wished his son had gone through the Cultural Revolution so he’d have been toughened up for life.

Along with the grand panorama of Chinese history, one is treated in this book to many little recalled historical facts. Among countless others, Hsu reminds us of the 228 Massacre, the 1947 Taipei crackdown that was uncannily similar to Tiananmen Square, during which thousands of dissenters against the Chiang Kai-shek regime were killed — and which spawned 40 years of marital law and suppression.

He tells us, too, the fascinating story of the central role Christian missionaries played in the education of Chinese girls who’d otherwise have been left illiterate. And another: The story of a German businessman and member of the Nazi party, who, while employed by Siemens in China during the Rape of Nanking, worked around the clock to save Chinese refugees from the marauding Japanese, even going so far as to interrupt rapes in progress and pull the rapists off their victims. In one of the ironies with which the book is replete, his swastika armband was what allowed him free passage on his rescue missions.

Going further back, we learn that pottery making dates back to Neolithic times in China, and porcelain has held as dominant a place in the Chinese economy as the automobile in the U.S. Hsu discovered that porcelain is so significant a part of China’s history that “Most residents above a certain age could remember when the Chang River ran so clean, they could read the characters on the shards lining its bottom, in such quantities that they had to wear shoes when swimming to protect their feet from getting cut.”

And what story of China is complete without accounts of meals? Hsu’s descriptions, such as that of Crucian carp, “sautéed in oil and then simmered in garlic, vinegar, and soy sauce and thickened with piles of roe,” can make one rush to the nearest Chinese hole-in-the-wall.

His 96-year-old grandmother gives Hsu her take on Chinese culture and social mores when he tells her of his plan to dig up the family stash. “The countryside is full of people who will think you’re rich and bother you for money,” she says. “And Chinese people’s traditional education is to be jealous of others, to criticize, to have confrontations. If you’re not good enough, they’re too good for you. If you’re too good, they’re jealous of you.” She forbids him to look for the family treasure.

As Hsu, undaunted, travels closer to his great-great grandfather’s village, he is struck by the contradictions — the vast ugliness and great beauty — of his blood country. At a pottery workshop complex, he recounts, “I walked up the Lao Chang’s main road, lined with oozing heaps of trash so putrid I felt I might get sick just looking at them. Wild mutts with elongated bodies and folded, triangular ears rooted through the trash. I narrowly missed stepping into a maggoty pile of chicken feathers and entrails, having smelled it milliseconds before I set my foot down.”

Then, he describes the graceful ceramics resting outside a studio in the artisans’ colony. “Not far from the garbage piles, freshly thrown and molded clay bodies congregated along the defunct train tracks cutting through the Lao Chang, drying in the sunlight and giving perch to butterflies and dragonflies.”

Hsu’s pieced-together Chinese shards offer a picture of a vibrant, energetic, chaotic and unstoppable nation in which everyone is running roughshod over everyone else, headed for fortune. China seems to comprise individuals who have been subjected to the worst of human inhumanity — a people forged by fire, who have attended not just the mere school of hard knocks but the university of ridicule, starvation and torture unto near-death.

Astonishingly, as Hsu shows in interview after interview, this rugged history has yielded a populace admirably resilient, positive and forward marching.

In China, it seems, there is little tenderness, but a kind of indefatigable, beaming optimism, and a sturdy trust in the toughness of the human fiber. One winds up profoundly impressed by the powerlessness of the individual, and, simultaneously, by his resilience. Hsu’s Chinese are a people kicked to the gutter, who pop up plucky and pugnacious, ever-poised for the next round.

Sara Mansfield Taber is author of Born Under an Assumed Name: The Memoir of a Cold War Spy’s Daughter. She has also published Bread of Three Rivers: The Story of a French Loaf, Dusk on the Campo: A Journey in Patagonia, and Of Many Lands: Journal of a Traveling Childhood. Her essays, travel pieces, and commentary have been published in literary magazines and newspapers such as the Washington Post and produced for public radio.

A noted forensic pathologist shares the horror of what he’s seen.

By Ian Sayer and Jeremy Dronfield

An elite group of Allies struggles to stay alive behind Axis lines in the waning weeks of battle.