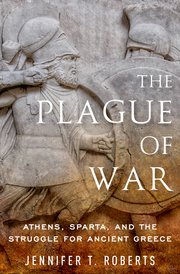 In The Plague of War, Jennifer T. Roberts, a professor of classics and history at the City University of New York, delivers a detailed retelling of the gory strife between Athens and Sparta in the 5th century B.C.E.

Roberts centers her narrative on the Peloponnesian Wars, the on-again, off-again struggle between the two Greek city-states from about 460 B.C.E. to 405 B.C.E. In this latter year, Sparta and its allies, more than 50 years into the conflict, defeated the powerful Athenian navy, and ended (for a time) the incessant conflicts that had consumed the Greek peninsula.

Many of us have long admired classical Athens as the birthplace of democracy, not to mention as a beacon of philosophical, architectural, and artistic brilliance. Yet in this same historical moment, the polis of Athens was a committed combatant in a lingering and bloody regional war.

Athens’ grisly struggle with Sparta creates a starkly ironic juxtaposition given 21st-century sensibilities: an ancient triumph of political governance and thought, of sculpture and drama, set against a bloody war — a conflict between two slaveholding city-states — that claimed more than 100,000 lives.

Roberts’ focus is on the war itself, although Socrates and Plato — not to mention dramatists Aeschylus, Sophocles, Euripides, and (especially) Aristophanes — wander fleetingly through her narrative. Most of Roberts’ book is a close retelling of Thucydides’ History of the Peloponnesian War, which scholars consider a singularly objective and realistic account.

For the 30-year run-up to this conflict that Thucydides did not cover, Roberts relies on Herodotus, Thucydides’ more mythologically wired contemporary, for her account of the period beginning in 490 B.C.E., during which an alliance of Greek city-states led by Sparta turned back the Persian empire’s attempted conquest of the Greek mainland.

Since Thucydides’ narrative somewhat mysteriously broke off in 411 (many scholars have advanced theories about this, of course), Roberts turns to other primary sources, some of them written much later than Thucydides, in order to continue the story.

Relying for the most part on Diodorus, Xenophon, and Plutarch, the author gracefully brings her narrative to a close with the resurgence of Athenian power in the 390s; the new anti-Sparta alliance of Corinth, Athens, and other Greek city-states with old enemy Persia; and the subsequent defeat of Sparta in the 360s. The emergence of King Phillip of Macedon, father of Alexander the Great, put a period to all this and soon after set the Hellenistic Age in motion.

For readers who, like this reviewer, are not adept in the history of classical Greece, The Plague of War can be a bit overwhelming. The difficulty lies in the details, which march by relentlessly — the names of hundreds of generals and politicians, the scores of city-states embroiled in the conflict, and a panoply of mountains, rivers, bays, and other geographical points of interest.

Roberts counterbalances the weight of these details with energetic writing that occasionally verges on the perky (“betraying its allies was what Sparta did best”; “the squawky Corinthians bear much of the blame for goading the Spartans into war”).

And from time to time, she provides welcome relief for the detail-addled reader through evocative set pieces that slow her narrative to a more pleasing pace. Among these are her account of the trial and suicide of Socrates, the saga of Athens’ abortive (and imperialistic) campaigns in Sicily, and glimpses of comic playwright Aristophanes, whose characters take the stage with often outrageous spins on the government and politics of the day.

There’s also the inconstant Athenian general Alcibiades, who seems to march in and out of the action, compulsively and repeatedly changing allegiances — from Athens to Sparta to Persia and back again — seemingly immune to lasting reprisal, if not resentment, by the populace on both sides. (Although Roberts does not portray Alcibiades in this way, I couldn’t help visualizing him as Pyrgopolinices, the braggart soldier in Roman playwright Plautus’ Miles Gloriosus about two centuries later.)

Roberts also supplies other helpful aids for following her long and detailed chronicle: an extended timeline up front, and a biographical guide, glossary, bibliography, and deep index at the end.

In Roberts’ hands, the struggle between sprawling democratic Athens and the much smaller, oligarchic Sparta may seem monumentally “historic.” But a glance at the map of ancient Greece suggests a variant perspective, even a chilling one.

Athens and Sparta lie little more than a hundred miles apart, approximately the distance between Philadelphia and Baltimore. Transpose the conflict to our geography, and then consider the 100,000-plus dead left in the wake of this protracted war of small geographic compass but frightening human cost.

The Man in the Red Coat